'Magnetic Droplets' Have Been Created in a Lab 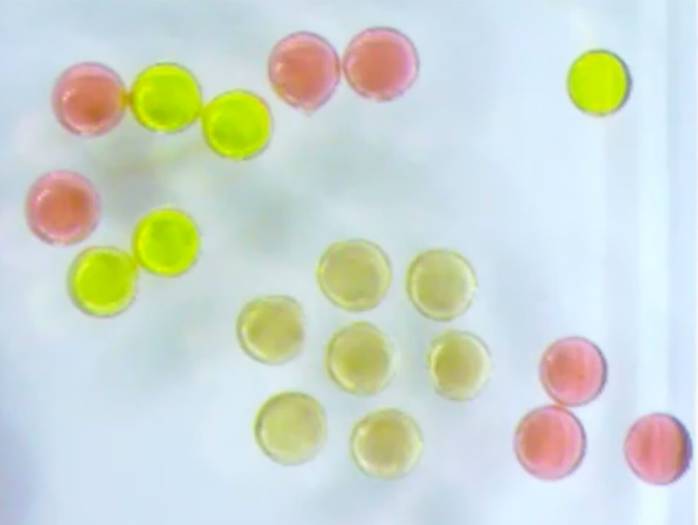 Thanks to the magnetic system, smart scientists, and inventors who always stand on a front line for making our lives better. From the magnetic needle on a compass to magnetic data storage devices and even MRI body scan machines depends on the magnetic system. Today's magnetic systems rely on solid magnets that are made from solid materials and so they can’t be reconfigured which limits its application and also its productivity in many ways. Ferrofluids, a promising alternative, though reconfigurable, they show paramagnetic nature at room temperature and ultimately lose their magnetization when the applied magnetic field is removed. So, scientists are in regular quest of a better magnetic system that can be reconfigured and also show the permanent magnetic property.

A team of scientists at the Department of Energy's Lawrence Berkeley National Laboratory (Berkeley Lab) has developed a magnetic liquid that is reconfigurable and shows ferromagnetic character.

The findings (Thomas P. Russell and Xubo Liu as the lead author) was published on July 19 in the journal Science.

"We've made a new material that is both liquid and magnetic. No one has ever observed this before," said Tom Russell, a visiting faculty scientist at Berkeley Lab and professor of polymer science and engineering at the University of Massachusetts, Amherst. "This opens the door to a new area of science in magnetic soft matter."

Russell's team showed a reversible paramagnetic-to-ferromagnetic transformation of ferrofluid droplets by the jamming of a monolayer of magnetic nanoparticles assembled at the water-oil interface and claimed they can be easily reconfigured into different shapes while preserving the magnetic properties as of solid ferromagnets with classic north-south dipole interactions.

The team developed a more simple means for the transformation of a ferrofluid into a ferromagnetic by the in situ formation and interfacial jamming of magnetic nanoparticles.

For this Rusell and Xubo Liu, a graduate student researcher in Berkeley Lab’s Materials Sciences Division and a doctoral student at the Beijing University of Chemical Technology used a 3D printing technique to print 1-millimeter droplets from a ferrofluid solution containing iron-oxide nanoparticles of just 20 nanometers in diameter. This 3D printing technique was developed earlier by Thomas P. Russell and Xubo Liu including other researchers.

Staff scientists, Paul Ashby and Brett Helms of Berkeley Lab’s Molecular Foundry revealed that the nanoparticles formed a solid-like shell at the interface between the two liquids through a phenomenon called "interfacial jamming." This was mainly done by using surface chemistry and sophisticated atomic force microscopy techniques. This caused the nanoparticles to crowd at the droplet’s surface, "like the walls coming together in a small room jampacked with people," said Russell.

When the magnetic coil was removed, surprisingly they observed that the droplets gravitated toward each other in perfect unison, like synchronized swimmers, forming an elegant swirl. About this Liu said, "like little dancing droplets." This signifies – the droplets had become permanently magnetic.

As the collective magnetism is strong enough to keep nanoparticles free-floating throughout the rest of the droplet in line. Further, like conventional bar magnets, the droplets’ opposite poles attract and their matching poles repel. So, researchers are confident that the whole droplet behaves like a solid magnet.

Russell said, "We almost couldn't believe it. Before our study, people always assumed that permanent magnets could only be made from solids."

However, this is not an easy task, this new kind of paramagnetic material can be actively used in the assessment of the robotic system as they can concurrently fit with soft materials and this can enable new modes of locomotion and object manipulation.