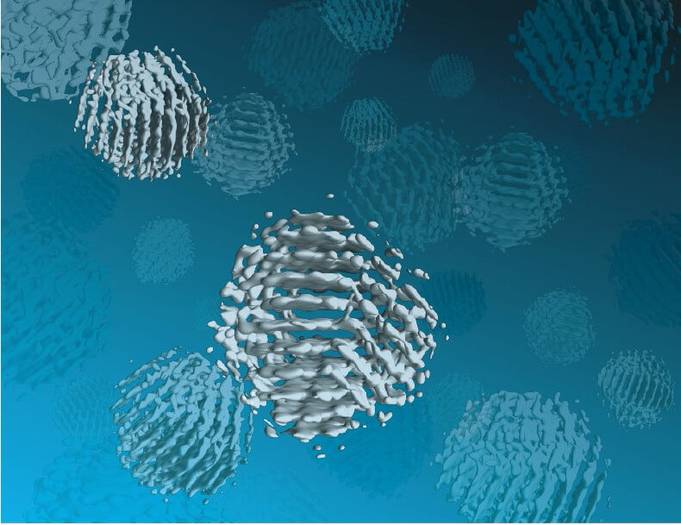 No one disagrees that nanoparticles serve as the basic building blocks for next-generation materials and the ultimate goal of nanotechnology is centered around the ability to design and build materials atom by atom, thus allowing scientists to control their properties in any given scenario. The knowledge about the synthesis, growth mechanisms, and physical properties of colloidal nanoparticles (a mixture that has particles ranging between 1 and 1000 nanometers in diameter) has been limited by technical impediments. The great invention of electron microscopes during the 1930s helped scientists peer into the atomic structure of ordinary materials like steel, and even exotic graphene but such imaging techniques cannot precisely map out the 3D atomic structure of materials in a liquid solution, which would tell scientists how materials behave in everyday life, such as in water or blood plasma and also in the catalyst in a hydrogen fuel cell, or the electrolytes in your car’s battery.

Now a team of researchers at the Center for Nanoparticle Research within the Institute for Basic Science (IBS, South Korea), in collaboration with Dr. Hans Elmlund at Monash University’s Biomedicine Discovery Institute in Australia and Dr. Peter Ercius at Lawrence Berkeley National Laboratory’s Molecular Foundry in the USA, reported a new analytic methodology that can resolve the 3D structure of individual nanoparticles with atomic-level resolution and employed it on platinum nanocrystals.

Researchers call their development 3D SINGLE (Structure Identification of Nanoparticles by Graphene Liquid cell Electron microscopy) and they utilize mathematical algorithms to derive 3D structures from a set of 2D imaging data. They claimed the 3D atomic positions of individual nanoparticles can be extracted with a precision of 0.02 nm -six times smaller than the smallest atom: hydrogen and this high-resolution method detect individual atoms and how they are arranged within a nanoparticle.

'The 3D atomic structures of nanocrystals can be determined by electron tomography, whereby the structures are reconstructed from a tilt series of transmission electron microscopy (TEM) images. However, this method relies on image acquisition under vacuum and on a substrate, which can cause structural deformation of the nanocrystals. Furthermore, the spatial resolution is frequently nonuniform in 3D space owing to missing projection directions. Single-particle reconstruction based on cryo-TEM, as an alternative approach, is also not appropriate for studying heterogeneous nanocrystal populations because the analysis relies on 2D images collected from a large number of different particles assumed to have the same structure’- they wrote in the paper.

Their findings were reported  on April 3, 2020, in the journal Science, titled, "Critical differences in 3D atomic structure of individual ligand-protected nanocrystals in solution."

"This is an exciting result. We can now measure atomic positions in three dimensions down to a precision six times smaller than hydrogen, the smallest atom," said study co-author Peter Ercius, a staff scientist at Berkeley Lab’s Molecular Foundry.

Jungwon Park, one of the corresponding authors of the study (assistant professor at the School of Chemical and Biological Engineering in Seoul National University) explained, "If a fishbowl were made of thick material, it would be hard to see through it. Since graphene is the thinnest and strongest material in the world, we created graphene pockets that allow the electron beam of the microscope to shine through the material while simultaneously sealing the liquid sample."

A nanocrystal solution is sandwiched in-between two graphene sheets which are each just a single atom thick.

The study defined the atomic structures of eight platinum nanoparticles that displayed important differences in their atomic structures which affect their performance even though all of the particles were synthesized in the same batch. Here, platinum is used because platinum is the most valuable of the precious metals, used in a number of applications such as catalytic materials for energy storage in fuel cells and petroleum refining.

The team recorded 400 images per second of each nanoparticle freely rotating in liquid using a high-resolution transmission electron microscope (TEM). Then they applied their reconstruction methodology to combine the 2D images into a 3D map showing the atomic arrangement. By locating the precise position of each atom, researchers were able to predict how the nanoparticle was created and how it will interact in chemical reactions.

Director Taeghwan Hyeon of the IBS Center for Nanoparticle Research. highlighted, "We have developed a groundbreaking methodology for determining the structures that govern the physical and chemical properties of nanoparticles at the atomic level in their native environment. The methodology will provide important clues in the synthesis of nanomaterials. The algorithm we introduced is related to new drug development through structure analysis of proteins and big data analysis, so we are expecting further application to new convergence research."

Dr. KIM Byung Hyo, the first author of the study said, "Now it is possible to experimentally determine the precise 3D structures of nanomaterials that had only been theoretically speculated. The methodology we developed will contribute to fields where nanomaterials are used, such as fuel cells, hydrogen vehicles, and petrochemical synthesis."