Genetic Analysis Shows SARS-CoV-2 is not From Laboratory, it's From Nature 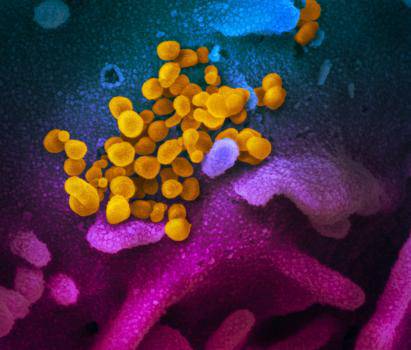 This scanning electron microscope image shows SARS-CoV-2 (yellow)also known as 2019-nCoV, the virus that causes COVID-19isolated from a patient in the U.S., emerging from the surface of cells(blue/pink) cultured in the lab. Image credit: NIAID-RML

You may have heard that the virus SARS-CoV-2 that causes COVID-19 immersed from some accidental science experiments and it spread all over the world. Some mentioned it happened somewhere in China while some mentioned some European countries as its origin. Maybe they have found some basis for their argument. But now scientists have found more concrete evidence that coronavirus does not come from some artificial source and claimed that it must be from nature. Here is why researchers claimed that coronavirus is from natural sources and debunk that artificial source idea of coronavirus.

Since 31 December 2019, when the first reports of novel pneumonia (COVID-19) in Wuhan, Hubei province, China, came, there has been considerable discussion on the origin of the causative virus, SARS-CoV-2.

A team of researchers consisting of Kristian G. Andersen, Andrew Rambaut, W. Ian Lipkin, Edward C. Holmes, and Robert F. Garry, from the field of biology and microbiology, offer a perspective on the notable features of the SARS-CoV-2 genome and discuss scenarios by which they could have arisen. What the team found was that the SARS-CoV-2 has unusual features that have only recently been identified in scaly anteaters called pangolins, evidence that the virus came from nature and the report was published on March 17, 2020, in the journal Nature Medicine.

In early January, shortly after the genetic makeup of coronavirus revealed, rumors began to rouse saying that maybe the virus was engineered in a lab and either intentionally or accidentally released. Robert Garry, a virologist at Tulane University in New Orleans says to this, an unfortunate coincidence - The Wuhan Institute of Virology is in very close proximity to the seafood market and has conducted research on viruses, including coronaviruses, found in bats that have potential to cause disease in people also drives the rumors. He added; "that led people to think that, oh, it escaped and went down the sewers, or somebody walked out of their lab and went over to the market or something."

Emma Hodcroft, a molecular epidemiologist at the University of Basel in Switzerland, expressed own viewed it as a misleading claim and the really bad science. Hodcroft said, "Essentially their claim was the same as me taking a copy of the Odyssey and saying, 'Oh, this has the word the in it,' and then opening another book, seeing the word the in it and saying, 'Oh my gosh, it's the same word,' there must be parts of the Odyssey in this other book.

To debunk the theories that prefer SARS-CoV-2 as a human-made mistake researchers mainly made the basis for the two peculiar and notable features of the SARS-CoV-2 genome.

As many researchers from different laboratories were working with coronaviruses that have the potential to infect humans, Andersen’s group set out to determine whether the virus could have been accidentally released from a lab. Andersen said, "Stuff comes out of the lab sometimes, almost always accidentally." Andersen added, "A couple of unexpected features of the virus caught the researchers’ eyes."

The team stuck at the coronavirus’s spike protein that has 12 extra RNA building blocks or nucleotides. This spike protein protrudes from the virus’s surface and allows the virus to latch onto and enter human cells. That insertion of RNA building blocks adds four amino acids to the spike protein and creates a site in the protein for an enzyme called furin to cut and the furin is made in human cells and cleaves proteins only at spots where a particular combination of amino acids is found, like the one created by the insertion. SARS and other SARS-like viruses don’t have those cutting sites.

Finding the furin cutting site was a surprise: Garry said, "That was an aha moment and an uh-oh moment." When bird influenza viruses acquire the ability to be cut by furin, the viruses often become more easily transmissible. The insertion also created places where sugar molecules could be fastened to the spike protein and that creates a shield to protect the virus from the immune system.

Andersen said, "It's very peculiar, these two features. How do we explain how this came about?  I've got to be honest. I was skeptical [that it was natural]. This could have happened in tissue culture" in a lab, where viruses may acquire mutations as they replicate many times in lab dishes. In nature, viruses carrying some of those mutations might be weeded out by natural selection but might persist in lab dishes where even feeble viruses don’t have to fight hard for survival.

Viruses, especially RNA viruses such as coronaviruses, often swap genes in nature. Finding genes related to the pangolin viruses was especially reassuring because those viruses genetic makeup wasn't known until after SARS-CoV-2's discovery, making it unlikely anyone was working with them in a lab.

In particular, the team found pangolins also have the amino acids that cause the tight binding of the spike protein to ACE2. Andersen said, "So clearly, this is something that can happen in nature. Andersen added, "I thought that was a very important little clue. It shows there's no mystery about its tighter binding to the human [protein] because pangolins do it, too."

Hodcroft said the Similarity of SARS-CoV-2 to bat and pangolin viruses is some of the best evidence that the virus is natural. Hodcroft added, "This was just another animal spillover into humans. It's really the most simple explanation for what we see." Researchers still aren't sure exactly which animal was the source.