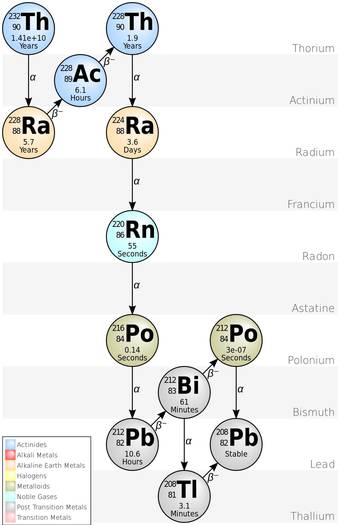 Diagram showing the different stages of Thorium Decay. It does not include the more recently discovered nuclides that precede Thorium-232 in the chain.

Matters are made up of atoms and atoms are made up of a nucleus containing most of the mass, and of electrons. The nucleus is a bound state of protons and neutrons held together by the strong nuclear force and the charge of the nucleus, which determines the chemical properties of the atom, is equal to the number of protons in it. Sometimes neutrons and protons are collectively referred to as ‘nucleons’.

The presence of neutrons in the nucleus is essential to make the nucleus stable and a nucleus needs an approximately equal number of protons and neutrons to be stable. But this is not always true; high-mass nuclei need more neutrons than protons to be stable. This disparity between neutron and proton gives to a new form of atoms, called isotopes.

Nuclei of the same charge but with a different number of neutrons are called isotopes. So, each isotope of a given element has a different mass number.

Among the isotopes of an element, some are stable and some are unstable where the unstable isotope decay until a stable configuration is reached (in one or more steps) by losing energy in the form of radiation. The decay process is called radioactive decay. There are three most common types of decay as alpha decay, beta decay, and gamma decay. Each decay emits alpha particle which is helium-4 nuclei, beta particle which is electrons, and gamma rays which is electromagnetic radiation like X-ray except much higher in energy and even more dangerous to living systems, respectively. The decay process that will be followed by an element depends on factors like the number of protons, neutrons, and how much heavier the element is.

The radioactive decay is governed by relation,

Most often, atoms with massive nuclei that have too large a proton to neutron ratio undergo alpha decay producing an alpha particle which is, as earlier said, 4He nucleus. An alpha particle, with its two protons and two neutrons, is a very stable configuration of particles. During this decay process, the mass number of the parent nucleus will be reduced by four and the atomic number will be reduced by two.

Where N is the atomic number and Z is the mass number.

Due to the change in atomic number alpha decay give rise to a different daughter nucleus and so have different chemical properties than the parent nucleus.

Some atom can go multiple decays until it comes to a stable state where they can also involve in other decay like beta decay.

For instance, 92U238  will eventually be converted into 82Pb206 which is stable by multiple alpha and beta decay.

You may look into National Nuclear Data Center for decay products of different elements.