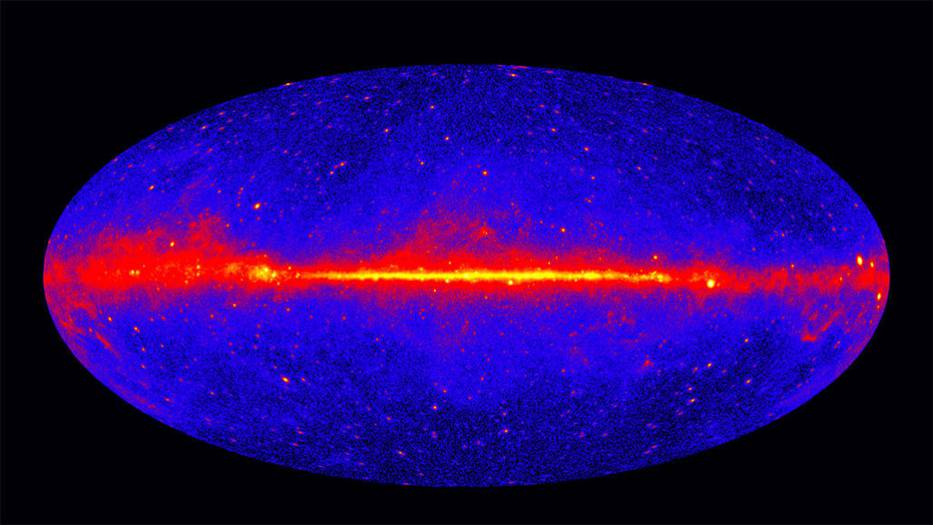 In this image from the Fermi space telescope, the Milky Way's stellar disk, which runs horizontally along the middle, glows in gamma rays. A vast halo of dark matter engulfs the disk and emits no light at all, which makes measuring the galaxy’s total size a challenge. Image credit: NASA/DOE/Fermi LAT Collaboration.

Beyond a certain distance, the Milky Way galaxy is filled with a disk of gas. The known brightest part of Milky Way galaxy is some 120,000 light-years across and beyond that, it is filled with the vast halo of dark matter, presumably full of invisible particles and because the dark halo emits no light, we are unable to predict somehow accurate diameter of the galaxy. As we can't detect dark matter directly, we have to infer its presence based on how it affects the stuff around it like, in this case, the stars and gas at the outer edges of the galactic disc.

Recently a team used a new approach to predict the edge-to-edge distance of the Milky Way galaxy. Alis Deason, an astrophysicist at Durham University in England, and her colleagues have used nearby galaxies to locate the Milky Way’s edge. The new approach used by the team of Alis Deason allowed them to predict that the Milky Way stretches nearly 2 million light-years across, more than 15 times wider than its luminous spiral disk or the brightest part of Milky Way galaxy and they claimed that this measurement is more accurate than others.

"Using the current dwarf galaxy population, we predict the edge of the Milky Way halo to be 292 +/- 61 kpc (kiloparsec)," the astronomers wrote in the study's which was published at arXiv.org of February 21, 2020 edition.

To determine the edge of the Milky Way, the team used a cosmological simulation both in isolation and in analogues of the Local Group, a small group of galaxies about 9.8 million light-years across, to which the Milky Way belongs. In particular, the scientists were interested in the Milky Way's proximity to M31, AKA the Andromeda galaxy, our closest large neighbour, and with which the Milky Way is due to collide in about 4.5 billion years. The two galaxies are currently about 2.5 million light-years apart - close enough to already be interacting gravitationally.

As the far end of the galaxy is full of dark halos, the edge is determined by analyzing where a drop in density or radial velocity of Galactic sized haloes occurs, both in dark matter and in stars.

The team identified two caustics manifestations located at two different radii measurements. The first measurement radius was a radius that corresponds to the splashback radius and second was likely that corresponds to the edge of the virialized material. The team found that second caustic was less affected by the presence of a companion which indicated a more natural definition for the boundary of the Milky Way halo.

Splashback radius is the radius where particles reach the apocenter (furthest point of an astronomical object in an elliptical orbit to its center of attraction) of their first orbit.

In a region of the universe, when the net potential energy and the kinetic energy of the system are in equilibrium, the particles orbit around a central potential eventually forming a stable energetic configuration is called the virialized structure and the materials are called virialized materials. Such a system as a whole satisfies the "virial condition,' where the kinetic and gravitational potential energies of the constituent particles balance each other out.

Researchers write in their paper, "In many analyses of the Milky Way halo, its outer boundary is a fundamental constraint. Often the choice is subjective, but as we have argued, it is preferable to define a physically and/or observationally motivated outer edge. Here we have linked the boundary of the underlying dark matter distribution to the observable stellar halo and the dwarf galaxy population. There is great hope that future data will provide a more robust and accurate measurement of the edge of the Milky Way and nearby Milky Way-mass galaxies than the one we have presented here. In this work, we have focused on Milky Way mass haloes in a ΛCDM cosmology, but a similar analysis can be extended to wider mass scales and applied to different cosmologies or dark matter models."