Black Holes: How they work? 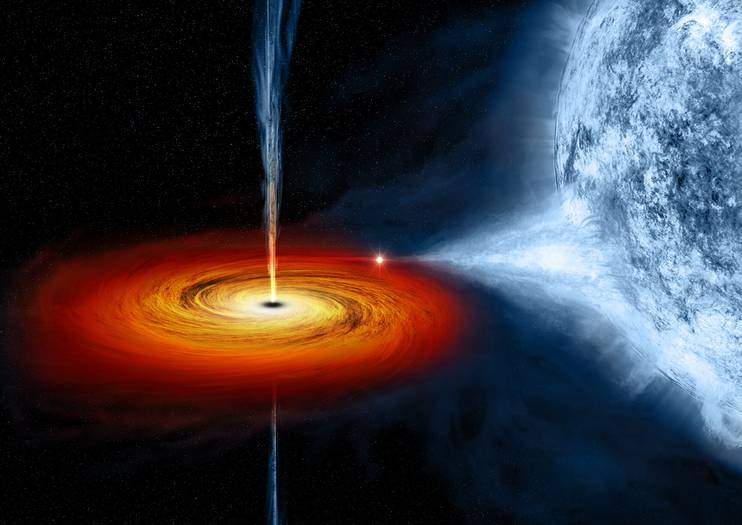 The black hole named Cygnus X-1 formed when a large star caved in. This black hole pulls matter from the blue star beside it. Image credit: NASA/CXC/M.Weiss

By evolution, the star dies and rapidly collapse inward. As it collapses, the star explodes its outer stuff and the inner region continue to crumble and eventually becomes a singularity (point-like mass) that will hold a zero volume and infinite density.

Singularity will have greater gravitational attraction, that will attract all the materials within its gravitational field and even light cannot escape through it.

Due to the extreme gravitational attraction, space-time around the black holes gets distorted and time moves slowly at the point nearer to the singularity. This time effect arises due to an effect called gravitational dilation. The more you go deeper into the black hole, the more time will slow relative to the outside of the black hole or flat space region.

Also Read: If We Can't see Black Holes, How are they Detected?

The space-time around and after the event horizon starts to curve by the tremendous force of the black hole. This anomalous phenomenon can be resembled with a flat space-time of rubber, tight around all the sides and hanging and putting a heavy load over the flat rubber. The load would bend the plane downward dramatically, which would elongate any interaction with the plane toward the load. The same thing happens with black holes. Moreover, every mass will make a curvature on the flat space-time that depends completely on the mass they have. Therefore, objects having massive mass like black hole will generate a more curvature on space-time around it or simply it will distort and bend the space-time as illustrated below.

A particle or object that is making their journey towards the center or singularity of the black hole may feel varied intense gravitational force depending upon the location relative to the center. And so they feel more and more "spaghettification" effect- spaghettification elongates the object and is used in the sense that it resembles spaghetti.

On a journey to cross the event horizon you will see everything, even starlight, of flat space compressed to appear as a dot and change the color into blue due to gravitational blueshifting. This will be your final glimpse of the outside flat universe. After particles of matter cross the event horizon, the light from the outer flat space doest not affect the appearance of that matter and it seems dark. Even if you are inside the event horizon then the stuff outside in the flat space-time will also appear completely dark.

We may never be able to cope inside a black hole and prove what exactly happens inside the black holes (this would require more and more advance theories and engineering), maybe at least for some decades, but there exists a consensus among the physicist about the incompetence of matter that can not escape outside of black hole is mainly due to the distortion in space-time due to the extreme gravitational pull of mas having zero volume and infinite density- singularity, and the abnormal gravitational gradient towards the singularity that exists in all directions.