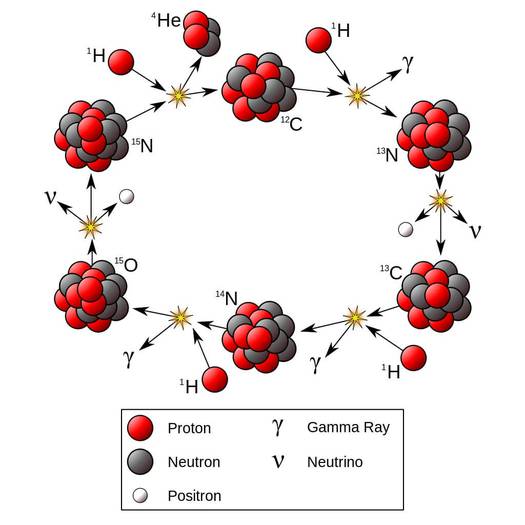 In the CNO cycle, four hydrogen atoms are captured by Carbon and Nitrogen atom in different steps and again regenerated carbon atom at last. Then the cycle repeats.

Also Read: Recent Neutrino Detection Proves the Sun is Undergoing a Second Kind of Fusion in its Core

In the second step, the nitrogen-13 nucleus is unstable, so decompose and emits a positive electron (positron, e+) and becomes carbon-13 (13C).

In the third step, the 13C nucleus then captures another proton and becomes nitrogen-14 (14N), and emits another gamma-ray.

In the final step, Nitrogen-15 captures a proton and produces a helium nucleus (alpha particle) and carbon-12, and the similar reaction cycle is commenced.

Hence, the carbon-12 nucleus used in the initial reaction is regenerated in the final one and hence acts as a catalyst for the whole cycle and the total energy released in one cycle is 26.73 MeV (when the two positrons emitted annihilate with two ambient electrons there produces an additional 2.04 MeV).