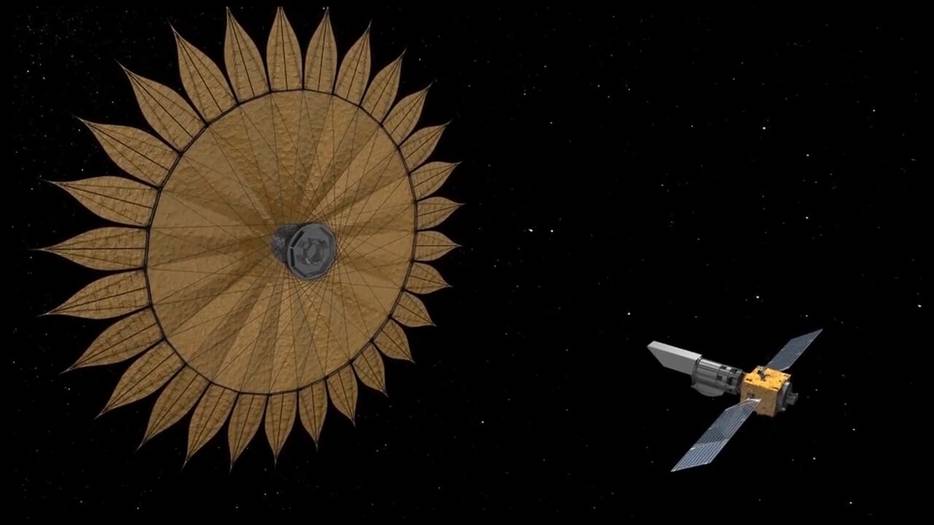 This artist's concept shows the geometry of a space telescope aligned with a starshade, a technology used to block starlight in order to reveal the presence of planets orbiting that star. Image Credit: NASA/JPL-Caltech

Welcome back to the next series of ‘How astronomers detect exoplanets?’ This series is about one of the most promising methods of detecting exoplanets - direct imaging method. Note that the detection method to be used all depends on the many factors like the planet’s cosmic distance from us (observer) and also from its host star, planet’s type, and planet’s atmosphere. Depending on the facet of a particular planet we have methods like radial velocity method, direct imaging, transit method, gravitational lensing, and astrometry. (We have other methods too like flare and variability echo detection, auroral radio emissions, optical interferometry, and eclipsing binary minima timing and more).

As the name suggests, direct imaging is the process of directly capturing the image of exoplanets. Though as the name also suggests this method to be as similar to our familiar and quotidian imaging technique, direct imaging in the case of detecting the exoplanets is much different and involves much technical stuff. Detecting and resolving them directly from their host star is not an easy task as the planets do not have their own light source and what little light comes from the host star tends to be lost in the planet’s atmosphere. To make the planets faint to see, the atmosphere of its star also plays a vital role.

Using this direct imaging method NASA has till now (June 26, 2020) detected 49 planets beyond our solar system and record indicates that 139 planets, 104 planetary systems, 4 multiple-planet systems have been confirmed worldwide till June 26, 2020.

Direct imaging technique depends on detecting the infrared wavelengths that are generated from the planet’s atmosphere due to the heat they receive from their host star.

This phenomenon is also prevailing on Earth. As the solar radiation from the Sun hits the Earth, some of the energy is absorbed by the atmosphere and the surface, thereby warming the planet Earth. This heat is radiated by the Earth in the form of infrared radiation.

Also, the planet needs to be widely separated from its parent star, and hot so that it emits intense infrared radiation. The image will be captured in the infrared region of the spectrum where the planet is brighter than it is at visible wavelengths.

The reason for grazing and capturing the planets at the infrared region of the spectrum lies in the reason for the brightness difference of the star and planets in their infrared region. At infrared wavelengths, a star is only likely to be about 1 million times brighter than a planet reflecting light, rather than a billion times (which is typically the case at visual wavelengths).

Under this method, astronomers mainly use two methods to block the lights from a planet’s host star. One method is called coronagraphy and another is starshade.

Coronagraphy uses a device - coronagraph, that is attached to the telescope designed to block out the direct light from a star so that nearby objects like the planet will only be seen and taken into account. These nearby objects will otherwise be hidden in the star's bright glare. Coronagraphs are now being used to directly image exoplanets from ground-based observatories.

Starshade also has the same functionality - blocking the direct starlight before it even enters a telescope while preserving the light emitted by the planet and makes it possible to see planets that the star system is governing. This technique is specially designed for the space-based telescopes.

One upcoming telescope mission that is added with the function of direct imaging is the NASA’s Nancy Grace Roman Space Telescope (formerly known as WFIRST, the Wide Field Infrared Survey Telescope).

The first detection of an exoplanet by using the direct imaging method occurred in 2004 when a group of astronomers used the European Southern Observatory’s (ESO) Very Large Telescope Array (VLTA) and confirmed the presence of a companion - 2M1207b, around the proximity of a brown dwarf 2M1207.

Though initially, the mass was just categorized as a companion mass, in the subsequent years it was confirmed as the planetary status.

The research study was published online in the journal Astronomy and Astrophysics on 21 September 2004.

Using this method astronomers were also able to announce (imaged in 2007, announced on 13 November 2008) the first multi-planet system around a star and they used telescopes at both the Keck Observatory and Gemini Observatory. They directly observed three planets orbiting HR 8799, whose masses were approximately 10, 10, and 7 times that of Jupiter.

A research paper describing the study was published in the journal Science on 28 Nov 2008.

Later observations from 2009 to 2010 revealed a fourth giant planet orbiting inside the first three planets (around HR 8799). The research study was published in the journal Nature on 08 December 2010. This has also been confirmed by multiple studies.

Another remarkable detection (though all research are all equally vital) using direct imaging method is the detection of a planet Fomalhaut b, orbiting its parent star - Fomalhaut. A research paper describing the finding and confirmation of Fomalhaut b was published in the journal Science on 28 Nov 2008.

The small white box at lower right pinpoints the planet's location. The inset at bottom right is a composite image showing the planet's position during Hubble observations taken in 2004 and 2006. Astronomers have calculated that Fomalhaut b completes an orbit around its parent star every 872 years. The object was initially announced in 2008 and confirmed in 2012 from images taken with the Advanced Camera for Surveys (ACS) on the Hubble Space Telescope and, according to calculations reported in January 2013.