Do You Know Today, May 21, is International Tea Day? 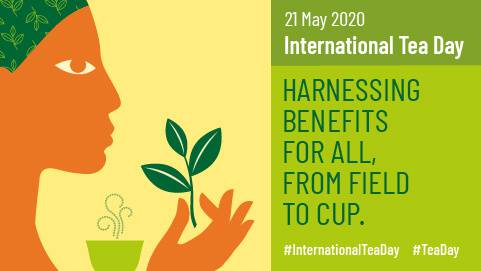 International Tea Day is an opportunity to celebrate its contribution to cultural heritage, health benefits, ecosystem, and the economy. Image credit: Food and Agriculture Organization of the United Nations (FAO)

With the aim to acknowledge and raise awareness of the long history along with the deep cultural and economic significance that tea imposed around the world, the United Nations General Assembly proclaimed 21 May as International Tea Day, calling on Food and Agriculture Organization of the United Nations (FAO) to lead the observance.

The first International Tea Day was celebrated in New Delhi, India in 2005 and the conference came out with an International Declaration on the rights of workers and small growers to help regulate uneven competition, land ownership, safety regulations, rights of women, social security and living wages.

It is believed that tea originated in northeast India, north Myanmar, and southwest China, but the exact place where the plant first grew is not known and evidence indicates that tea was consumed in China 5,000 years ago. Though the history of the origin of tea stretch back more than 5,000 years, its contributions to health, culture, and socioeconomic development are still as relevant today and in today’s world, it is the second-largest beverage consumed in the world after water.

The history of the trend of drinking of tea back to 2727 BC. According to Chinese legend, tea was accidentally discovered in 2727 BC, when the Emperor Shen Nong was boiling water in the shade of a tea tree and a leaf blew into the pot.

Tea is connected to cultural significance in many societies. Due to its characters like anti-inflammatory, weight loss effects, and antioxidant this can also bring considerable health effects.

Tea production and trade contribute especially in some poorest parts or rural areas in many ways such as their livelihood, earnings, food security, employment, and more. Tea is currently grown in more than 35 countries, and supports over 13 million people with the majority, 9 million, smallholder farmers and global tea production amounts to over 16.6 USD billion. China, India, Sri Lanka, and Kenya are considered the four main tea producing countries in the world.

Tea can also be produced in a variety of colors, flavors and that particularly depends on the climate of the tea producing area. For instance, due to its tropical climate and rich volcanic soil, Kenya produces tea of distinct bright colors like green, yellow, and the prestigious white tea, and of the aromatic flavor.

The tea produced in China is also a special kind of tea. In the Jasmine and Tea Culture System in Fuhzou, China, jasmine and tea trees are usually grown simultaneously. This phenomenon is all possible due to its vertical landscapes and diversified microclimate of the Fuhzou area. In these areas, tea is naturally scented with jasmine, a method developed over 1,000 years ago in the area and continued to this day.

Tea consumption in major tea producing countries is increasing but still per capita consumption remains low and this suggests there is still considerable growth potential in these countries and organizations like the UN, FAO are working to improve this.

Tea production, processing, and trading contribute to the goals of the UN including reduction of extreme poverty (Goal 1), the fight against hunger (Goal 2), the empowerment of women (Goal 5), and the sustainable use of terrestrial ecosystems (Goal 15).

So, the celebration of International Tea Day promotes sustainable production, consumption, and trade of tea. This also offers an opportunity for actors at global, regional, and national levels to ensure that the tea sector continues to play a role in reducing extreme poverty, fighting hunger, and safeguarding natural resources.