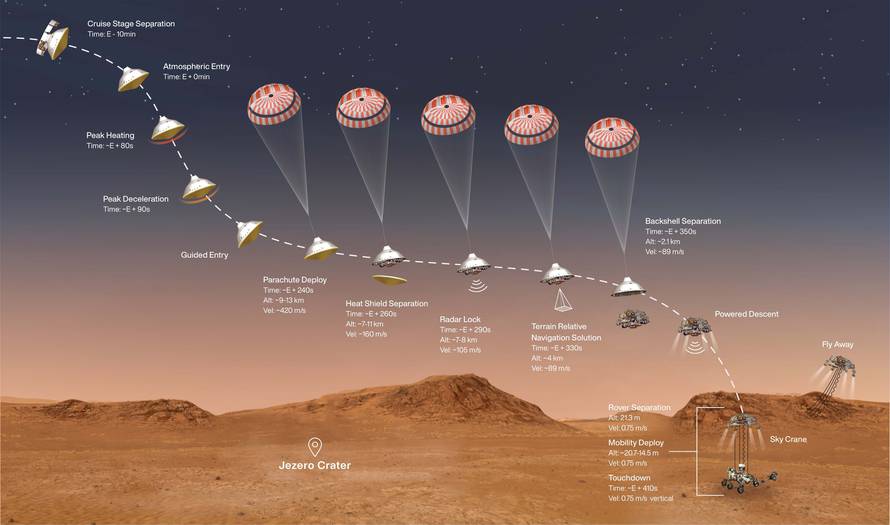 This illustration shows the events that occur in the final minutes of the nearly seven-month journey that NASA’s Perseverance rover takes to Mars. Hundreds of critical events must execute perfectly and exactly on time for the rover to land on Mars safely on Feb. 18, 2021. A metric version of this illustration is also available. Image © NASA/JPL-Caltech.

It's hard to land on Mars, and even harder to land a rover precisely on scientifically rich locations the science team wants to study, and with this complexity, previous rovers have landed in the general vicinity of areas targeted for study. So, to overcome this limitation, the Perseverance rover is fitted with a technology called Range Trigger by which we can get the precise timing of the parachute to more precisely land the rover.

The Range Trigger technology basically reduces the size of the landing ellipse (an oval-shaped area around the landing target) by more than 50 percent, helping put the rover on the ground closer to its prime target than previously possible.

Unlike previous missions which deployed their parachutes as early as possible, after the spacecraft reached the desired velocity, Range Trigger technology will deploy the parachute based on the spacecraft's position relative to the desired landing target. That means the parachute could be deployed early or later, depending on how close it is to its desired target.

To improve the entry, descent, and landing of the rover, two key abilities are important for Perseverance. They are;

And the Terrain-Relative Navigation technology is the solution that lets the rover make much more accurate estimates of its position relative to the ground during descent. Using Terrain-Relative Navigation, the Perseverance rover can estimate its location while descending through the Martian atmosphere on its parachute. That allows the rover to determine its position relative to the ground with an accuracy of about 130 feet (40 meters) or better.

Using images from Mars orbiters, the mission team first creates a map of the landing site. The rover stores this map in its new computer memory that is designed specifically to support Terrain-Relative Navigation. While descending on its parachute, the rover takes pictures of the fast-approaching surface.  To figure out where it's heading, the rover quickly compares the landmarks it sees in the images to its onboard map. Armed with the knowledge of where it’s heading, the rover searches another onboard map of safe landing zones to find the safest place it can reach. The rover can avoid dangerous ground up to about 1,100 feet (335 meters) in diameter and diverts itself toward the safer ground and avoid hazardous terrain.

As soon as the rover enters and descent into the Mars atmosphere it will have to face an extreme atmosphere of heat and dust particles and others too. For this and also to get the data during those activities, scientists came up with the idea of collecting and studying them with the aim they would be used for future missions. So, they used an advanced aeroshell sensor package.

As it enters the atmosphere of Mars, Perseverance is safely enclosed in its aeroshell, the protective capsule made up of the heat shield and backshell.  Perseverance takes the next step with Mars Entry, Descent, and Landing Instrumentation 2 (MEDLI2), a next-generation sensor suite that collects data from both the heat shield and backshell. By measuring the temperatures and pressures the vehicle experiences, and by tracking the performance of the heat shield, the team can update their understanding of the Martian atmosphere once again. This will ultimately help researchers in designing the future Mars entry systems for robotic and crewed missions.