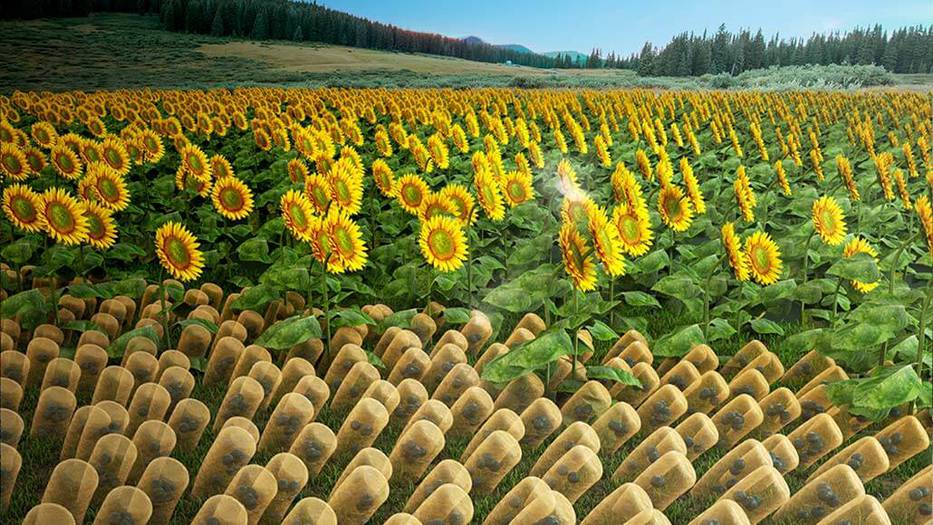 Rods of a new solar-energy-collection material seen at front of this drawing were inspired by sunflowers. Image © Yusen Zhao, Yousif Alsaid, and Ximin He

Though not fully understood till, by the article published in 2016, researchers believe that sunflowers demonstrate heliotropism - the phenomenon of flowers following the sun across the sky, due to their stems elongating at different rates at different times of day. Understanding and using the heliotropism phenomenon of sunflowers for advancing the human world, however, trouble copying this ability with synthetic materials, is in progress and different research groups are working on it, especially for the production of clean energy.

But a research team from the University of California, Los Angeles have developed the first type of synthetic phototropic material system that shows sun-tracking ability. They called it a sunflower-like biomimetic omnidirectional tracker, in short- SunBOT.

Phototropic is a response of materials to the stimulus of light, that can either be towards of away.

Do you know that all sunflowers don't respond to the direction of sunlight? A mature sunflower doesn’t track the sun.

The team reported an artificial phototropic system based on nanostructured stimuli-responsive polymers that can aim and align to the incident light direction in the three-dimensions over a broad temperature range.

Not only are sunflowers a phototropic instead there are a lot. For instance, cells and bacteria can migrate towards sources of chemical gradients, known as chemotaxis, for food (for example, glucose), fertilization (for example, sperm moving towards the egg) or immune functions.

Here researchers made the SunBOT mainly from two parts where one is a type of nanomaterial and another is a polymer.

The OEL from Pmax under the normal incidence (left) to Pθ=Pmaxcosθ under an oblique incidence at a θ zenith angle (Pmax=Pθ (θ= 0°)) suffered by a conventional non-phototrophic surface (middle) can be fully recovered by a surface covered with a phototropic array (right).

The nanomaterial is made from billionth-of-a-meter size pieces of a material that responds to light when it heats up. The team embedded these nanobits into a polymer where the polymer shrinks when it heats up. Together, the polymer and nanobits form a rod; you might think of it as being something like a cylinder of solid glitter glue.

Now the mechanism of tracking the sun's direction becomes simple. When the light was beamed on one of these rods, the side facing the light heated and contracted, forcing the rod to bend towards the beam of light.

Once the top of the rod pointed directly at the light, its underside cooled and the bending stopped.

They used tiny pieces of gold and a hydrogel to make their first prototype of the SunBOT. In Addition, they found that they also could make SunBOTs from many other things. For instance, they substituted tiny pieces of black material for the gold. And instead of the gel, they used one type of plastic that melts when it gets hot.

This also suggests that depending on what they want to use them for, we can now mix and match the two main parts. For example, ones made with a hydrogel might work in water. SunBOTs made with the black nanomaterial are less costly than ones made with gold.

The team envisions that SunBOTs could be lined up in rows to cover an entire surface, such as a solar panel or window.

Further, they think that coating surfaces with SunBOTs might also solve one of the biggest problems in solar energy; while the sun moves across the sky, stationary things - such as a wall or rooftop - don’t. This is the reason why even today’s best solar panels capture only about 22 percent of the sun’s light. To overcome this limitation, some solar panels could be pivoted by day to follow the sun. But moving them requires a lot of energy which is not energy efficient. SunBOTs, in contrast, can move to face the light all on their own - and they don’t need added energy to do it.

A paper describing the research work was published in the journal Nature Nanotechnology. Supplement and video materials can be found here for free.