For the First Time, Direct Water Molecular Deposit Detected on the Sunlit Moon by SOFIA 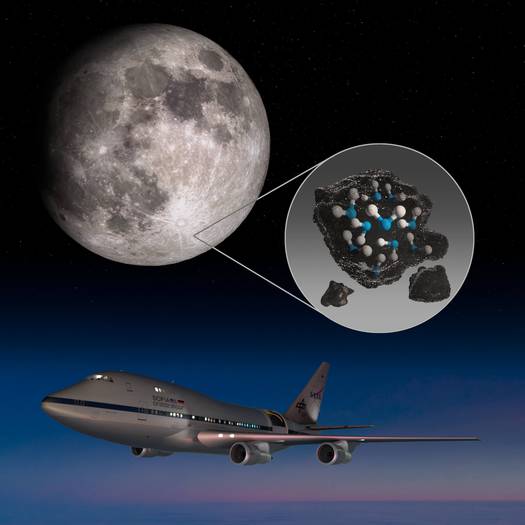 This illustration highlights the Moon’s Clavius Crater with an illustration depicting water trapped in the lunar soil there, along with an image of NASA’s Stratospheric Observatory for Infrared Astronomy (SOFIA) that found sunlit lunar water. Image © NASA/Daniel Rutter

Astronomers have long been on a quest to exactly answer the topic of water on the moon. The first direct evidence of water vapour near the Moon was obtained by the Apollo 14 ALSEP Suprathermal Ion Detector Experiment, SIDE, on March 7, 1971. Since then researchers were in the continuous hunt of water source on the moon so we may have insight into different areas like extraterrestrial life and formation of water molecules.

Recently, on 26 October 2020, NASA’s Stratospheric Observatory for Infrared Astronomy (SOFIA) has confirmed, for the first time, water (H2O) on the sunlit surface of the Moon, exactly saying, in the region of Clavius Crater which is one of the largest craters visible from Earth, located in the Moon’s southern hemisphere.

This unprecedented discovery signifies that water may have distributed across the lunar surface and not limited to cold, shadowed places.

The team, in a search for molecular water, using SOFIA and the Faint Object infraRed CAmera for the SOFIA Telescope (FORCAST) instrument, conducted observations of the lunar surface at 6µm on 31 August 2018. FORCAST is well suited to look for 6µm lunar water due to its wavelength coverage from 5 to 8µm and its high signal-to-noise ratios.

FORCAST is a dual-channel mid-infrared camera and spectrograph sensitive from 5 - 40 μm. Each channel consists of a 256x256 pixel array that yields a 3.4'x3.2' instantaneous field-of-view with 0.768'' pixels, after distortion correction.

While previous observations have confirmed the existence of some form of hydrogen in the moon’s surface, none observations were able to distinguish between water and its close chemical relative, hydroxyl (OH).

Data from this location reveal water in concentrations of 100 to 412 parts per million - roughly equivalent to a 12-ounce bottle of water - trapped in a cubic meter of soil spread across the lunar surface. Sahara desert, in comparison, has 100 times the amount of water than what SOFIA detected in the lunar soil. Though a small amount, this discovery raises new questions about how water is created and how it persists on the harsh, airless lunar surface.

Paul Hertz, director of the Astrophysics Division in the Science Mission Directorate at NASA Headquarters in Washington said, “We had indications that H2O - the familiar water we know - might be present on the sunlit side of the Moo. Now we know it is there. This discovery challenges our understanding of the lunar surface and raises intriguing questions about resources relevant for deep space exploration.”

The team observed two sunlit locations on the Moon within a 10min period. One region was at high latitude to search for water where total water has been reported to be high and, as a control, an equatorial region that was expected to have little H2O. The zenith angle of the observations ranged from 33.06° to 33.54° between the two observed locations and the aircraft travelled less than ~1.5° in terrestrial longitude and maintained an altitude between 13,105m and 13,112m during the observations.

At high southern latitudes, the slit was placed from the lunar limb through the region near the crater Clavius and at low latitudes, a location in Mare Serenitatis. These locations were chosen for the high and almost no possibility of total water abundances, respectively.

Casey Honniball, the lead author who published the results from her graduate thesis work at the University of Hawaii at Mānoa in Honolulu said, “Prior to the SOFIA observations, we knew there was some kind of hydration. But we didn’t know how much, if any, was actually water molecules - like we drink every day - or something more like drain cleaner.”

With this discovery, another big question again showed up; ‘How the water came?’

Honniball who is now a postdoctoral fellow at NASA’s Goddard Space Flight Center in Greenbelt, Maryland said, “Without a thick atmosphere, water on the sunlit lunar surface should just be lost to space. Yet somehow we’re seeing it. Something is generating the water, and something must be trapping it there.”

The team hypothesized several forces could be at play in the delivery or creation of this water. Among them, one possibility is that the micrometeorites raining down on the lunar surface may have carried small amounts of water and could have deposited the water on the lunar surface.

Another possibility is there could be a two-step process whereby the Sun’s solar wind delivers hydrogen to the lunar surface and causes a chemical reaction with oxygen-bearing minerals in the soil to create hydroxyl.

In addition, this also intrigued another question; How the water then gets stored -making it possible to accumulate. Astronomer speculated two possibilities. One is that the water could be trapped into tiny beadlike structures in the soil that form out of the high heat created by micrometeorite impacts and another is that the water could be hidden between grains of lunar soil and sheltered from the sunlight – potentially making it a bit more accessible than water trapped in beadlike structures.

Whether the water SOFIA found is easily accessible for use as a resource remains to be determined. Under NASA’s Artemis program, the agency is eager to learn all it can about the presence of water on the Moon in advance of sending the first woman and next man to the lunar surface in 2024 and establishing a sustainable human presence there by the end of the decade.

The results are published in the latest issue of Nature Astronomy.