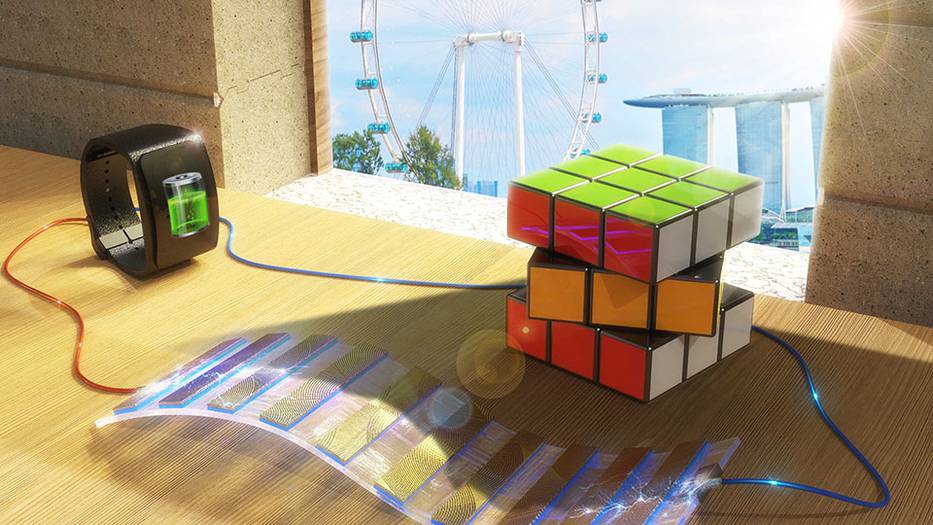 The novel shadow-effect energy generator developed by NUS researchers uses the contrast in illumination between the lit and shadowed areas to generate electricity. Image credit: Royal Society of Chemistry

We, the human world, have always been looking for additional clean energy sources that may help in the sustainable development of humans. In the quest for the search of energy sources like electricity, coal, and petroleum, human race has been looking for alternative sources something like clean energy alternatives. Solar electricity is a perfect example of alternative and clean energy. great thanks to a 19-year-old French physicist, A.E. Becquerel, who first paved the concept of modern solar power technology.

In the search of an alternative and convenient clean energy source, scientists have designed a prototype device, called Shadow-Effect Energy Generator (SEG), that can generate electricity out of nothing but a shadow. This may sound like a science fiction movie device but this is a real story.

No one can debatable on the topic that the human future lies in the renewable clean energy supply.

A team of researchers from National University of Singapore (NUS) Materials Science and Engineering and NUS Physics created a prototype of the device that makes the use of the contrast in illumination between lit and shadowed areas to generate electricity.

The research work was published in the journal Energy & Environmental Science, on 15 Apr 2020.

Tan Swee Ching Assistant Professor at NUS Materials Science and Engineering and team leader said, “Shadows are omnipresent, and we often take them for granted. In conventional photovoltaic or optoelectronic applications where a steady source of light is used to power devices, the presence of shadows is undesirable, since it degrades the performance of devices. In this work, we capitalised on the illumination contrast caused by shadows as an indirect source of power. The contrast in illumination induces a voltage difference between the shadow and illuminated sections, resulting in an electric current. This novel concept of harvesting energy in the presence of shadows is unprecedented.”

In this research work, the team presented a shadow-effect generator that successfully exploits the shadowing part of the generator and generates a direct current. Here, the shadow-effect mechanism was experimentally validated by Kelvin Probe Force Microscopy (KPFM). KPFM is a noncontact variant of atomic force microscopy (AFM) which allows us to observe the work function - minimum energy needed to remove an electron from a solid in the vacuum, of the surface at atomic or molecular scales.

As the world is being digitalized day-by-day, the need for a continuous power source is must required. Both indoor and outdoor electronic devices like smartphones, smart glasses, electronic health fit devices, e-watches, and many other devices will have more useful arenas and more productive if they are fitted with a continuous power supply. Though the existing solar cell system can do this job in an outdoor and mostly on the sunny environment, their energy harvesting efficiency drops significantly in the indoor environment. But, a prominent replacement to the executing power supply technology, this new shadow-effect generator can be used in indoor conditions where shadows persist.

This shadow-effect generator can be used in places where there is the presence of shadows such as shadows cast by the furniture in our homes, shadows of people entering/exiting through doors, shadows of passengers on board a bus, the shadow of clouds, waving tree branches perhaps, and even shadows of our moving arms or legs.

This concept of using the illumination contrast which is caused by shadows castings as an indirect source of power is unprecedented. Though photovoltaics technique that converts ambient light energy from the environment into electrical energy shares somehow similar concepts, shadows cast on the active area of these devices are often deleterious to their performance, and also if they are installed in a large array there developed a shadow of one cell by another requiring a large space between them.

Researchers claimed that by SEG we can not only generate electricity out of nothing but shadow but also can serve as a self-powered sensor to monitor passing objects at certain distances. In addition, adhering arrays of SEGs to a flexible substrate, they can be attached to clothing that can power wearable electronic devices and continuously provide power supply by converting the shadows cast on itself- a self-powered sensor.

The designed SEG prototype is simply simple! The SEG is made up of a series of thin strips of gold film on a silicon wafer, placed on top of a flexible plastic base and this uses a contrast between darkness and light to produce electricity.

The SEG consisted of a wafer and a thin film- an n-type Si wafer with a 15 nm thick deposited Au (gold) thin film. So, the total fabrication (note that this is only a prototype design, not an industrial version) cost is much lower than a commercial silicon solar cells.

The team also tested the flexibility of the SEG device.

This ability of SEG to bend at different angles without losing its working property demonstrated that the designed SEG array has certain flexibility which makes it possible for wearable applications.

Regarding the working principle of this newly designed SEG, researchers explained that the work function of Au is higher than that of the n-type Si and due to this difference in their work function, free electrons flow from n-Si to Au in the shadowed contacted regions of Au and n-Si. This electron transfer between Au and n-Si will continue until the Fermi levels of Au and n-Si are aligned. Now under equilibrium, a depletion region will be established and upon illumination, the absorption of photons with energy higher than that of the bandgap creates electron-hole pairs via a band to band transition.

The generated electron-hole pairs will ultimately separate as the free charge carriers and move in different directions due to the internal electric field (electrons to n-Si while holes to metal).

Finally, the illumination contrast energy is converted into electric power.

Professor Andrew Wee from NUS Physics and co-team leader of the study said, “When the whole SEG cell is under illumination or in shadow, the amount of electricity generated is very low or none at all. When a part of the SEG cell is illuminated, a significant electrical output is detected. We also found that the optimum surface area for electricity generation is when half of the SEG cell is illuminated and the other half in shadow, as this gives enough area for charge generation and collection respectively.”

However, on the preliminary work researchers were able to generate electricity out of shadow by taking the favour of difference in the work function between illuminated and shadowed zones of the SEG, there still remains lots of work to do.

In future researchers may want to replace the gold film with different materials and try to bring down the cost of the newly designed SEG.

Furthermore, researchers, in the future, will be trying to develop self-powered sensors that may show versatile functionalities, as well as wearable SEGs attached to clothing to harvest energy during normal daily activities and the development of low-cost SEG panels for efficient harvesting of energy from indoor lighting.