Gravitational Theory of the Origin of Spiral Structure of Galaxies 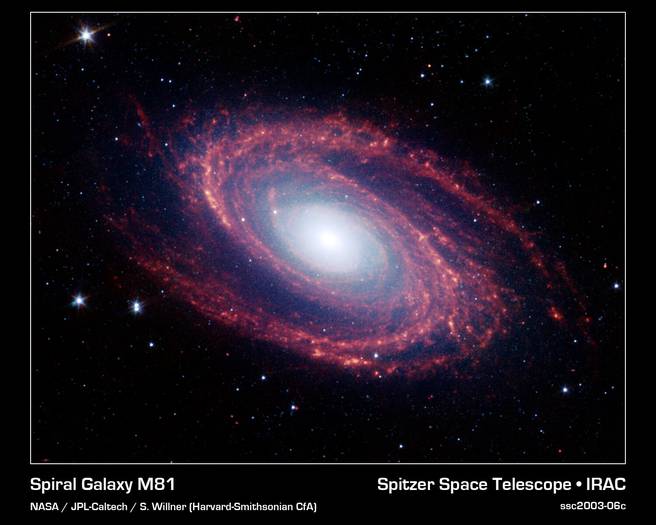 The magnificent spiral arms of the nearby galaxy Messier 81 are highlighted in this NASA Spitzer Space Telescope image. Located in the northern constellation of Ursa Major (which also includes the Big Dipper), this galaxy is easily visible through binoculars or a small telescope. M81 is located at a distance of 12 million light-years.

The concept of gravitational effect on the spiral arms was first developed by Bertil Lindblad (B. Lindblad) and later along with P. O. Lindblad tried to explain the formation of spiral arms in disc galaxies as the manifestation of density waves, for which gravitational resonance was largely responsible.

To explain the theory of the B. Lindblad concerning the development of spiral structure in disc galaxies, we first have to define and understand dispersion orbits in the central layer of such a galaxy.

Now the gravitational theory of spiral structures primarily considers the fact that the bulk of gravitational pull is provided by the Population II objects. Under the normal gravitational field of these objects, the material in the plane moves in predominantly circular orbits with largely different angular velocities at different radial distances. This strong differential rotation imparts a sheering force on any condensation of materials having a radial extension and as a result, the local cloud will be drawn into a curve before it finally loses its identity completely. This curve along with the cloud ultimately dissolves is called a dispersion curve (by B. Lindblad) and thus formed orbits are called the dispersion orbit.

The amount of thus produced disturbance will vary and in the regions of maximum disturbance, the nearly circular orbits will be drawn into considerably elongated orbits. The accumulated elongated orbits will, in the long run, grow into a diffuse elongated ring. Finally, the ring will continue to have its share of disturbing forces on the neighbouring orbits and consequently, we can define a central orbit in the ring and those other orbits in the ring that happen to intersect this central orbit will accumulate around this orbit to give rise to a more narrow ring. This narrow elongated ring formed by the accumulation of dispersion orbits in the central layer of a galaxy is called a dispersion ring (named by B. Lindblad).

Dispersion rings are the products of differential rotation and gravitational disturbance on the matter lying in the central layers of the equatorial plane of disc galaxies. The ring is composed of both stars and gas and possesses a high degree of stability. It will draw all the matter lying within the range of r and gradually grow itself in size, ultimately those dispersion rings grow fairly into a massive one.

We are now close to getting spiral structure in disc galaxies produced by the sole effect of the gravitational forces.

Hence, it is now natural to conceive that the gravitational perturbation experienced by a dispersion ring will give rise to a density fluctuation within the ring which propagates in wave motion along the body of the dispersion ring and these waves are called the density wave.

[There exists another interesting theory of density wave that describes the spiral arms - Density Wave Theory of Lin and Shu.  I will be describing it in the next session].

Actually, two different modes of density waves will be propagated along the ring where one will move with an angular speed faster and another will move slower with respect to the circular velocity of the material in the ring at the corresponding distances. The perturbing effects will be strong in regions of gravitational resonance where the angular speed of circular motion equals the angular speed of the apsidal line of the disturbing ring. Eventually, spiral structure will develop in these regions of gravitational resonance which are often called the Lindblad resonance.

Now you may be wondering and thinking ‘this seems like just a theory and has no practical significance’ but hold on it is not just like what you think.

Later P. O. Lindblad, through machine calculation, demonstrated the formation of dispersion rings in the central region of a galaxy and the subsequent development of spiral structure by the gravitational resonance effects. In his mechanical calculation, Lindblad considered an elongated ring around the galactic centre where the galactic centre consists a total of 48 mass-points each of mass 16✕106 solar mass. The ring is subjected to the central force field of the galaxy and the mass-points act upon each other. Lindblad’s computation showed that under the conditions even after a period as long as ~2 ✕ 109 years, the ring remains fairly stable while the mass has undergone a change (inside the ring). Further, in his second computation, Lindblad considered a system of three rings, symmetrically situated around the galactic centre at a distance of 2, 4, and 6 kpc respectively. Altogether 116 mass-points in these rings, each of mass 64 ✕ 106 solar mass were considered. Lindblad found a bi-symmetrical pair of density waves being raised in the middle ring, where one component of which moves with higher angular velocity than that of the masses forming the ring. These waves influence the surrounding matter, the perturbing effects being maximum in regions where the angular velocity of the matter is equal to the angular velocity of apsidal line of the disturbing ring. Lindblad showed that the spiral arms are born as leading, but gradually the mass was exchanged between the inner and the outer region and the spiral arms transformed into the trailing, and also a bar structure is developed in the inner region.

As time passes, the prominent manifestation of spiral pattern deteriorates gradually by the differential rotation of the equatorial plane of the galaxy, but the bar structure in the central region persists for a longer time. Also, this bar structure can again regenerate the spiral pattern in the outer regions in a much the same way as in the case of the first generation of the spiral arms. Thus a process of repeated formation and destruction of spiral arms can be carried on in the central layer of a disc galaxy under the joint influence of the bi-symmetrical density waves and differential rotation. These generations of spiral arms will appear and subsequently be liquidated approximately within the time-scale shorter than 109 years.

A similar type of experiment and a similar conclusion has also been shown by Hockney in 1967 with ten times as many rodlike stars, which confirms that under suitable conditions both density waves as well as spiral arms do really show up.

In a recent study by a team of international collaboration, astronomers studied a spiral galaxy, UGC 3825, to measure the offset between young stars of known age and the spiral arm in which they formed, allowing direct measurement of ΩP (pattern speed) at a range of radii. The offset in this galaxy is found to be as expected for a pattern speed that varies little with radius, indicating consistency with a quasi-stationary density wave, and lending credence to this new method.

Thus both the theoretical and experimental results indicate that the process of formation of spiral arms in the equatorial layer of disc galaxies can largely be accounted for by the gravitational resonance effects.