Here is the Most Detailed 3D Representation of SARS-COV-2 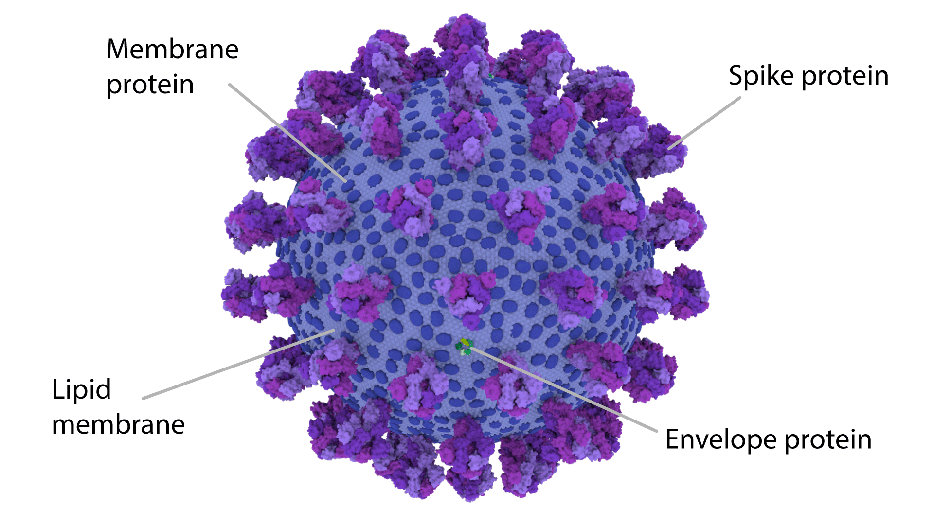 On 31 December 2019, Wuhan Municipal Health Commission made the first public announcement of a pneumonia outbreak of unknown cause and that announcement was enough to trigger the investigation. Later they confirmed that the virus is the SARS-CoV-2 or simply the coronavirus and on 30 January 2020, WHO declared the coronavirus a public health emergency of international concern.

Back in the initial stage, the number of cases doubled approximately every seven and a half days. Since then it has affected around 213 countries and territories and almost whole world is racing to make a clearer insight into the SARS-CoV-2 that causes the COVID-19 disease.

Though enormous researches are going on around the globe and each new discovery on the virus provides scientists vital information on ARS-CoV-2. But they are still not enough and are not able to give a clear overall image of the virus particles that is responsible for infecting us.

Now, a collaborative from the University of Glasgow has generated one of the most detailed 3D models of both the interior and the exterior of the SARS-CoV-2 virus particle. These 3D models will certainly help us in understanding more about the SARS-CoV-2, developing the antidote, and also help us in preventing other possible hazards.

Though the new illustrations do not reveal any new information about SARS-CoV-2, they are one of the first and most detailed 3D representations of the virus particles.

The existing images of SARS-CoV-2 are generated based heavily on the historical studies of related coronaviruses, particularly the SARS-CoV-1 and mouse hepatitis virus.

To get a completely new 3D image of SARS-CoV-2, the team used the data from different studies that used several different methods such as structural biology of isolated virus proteins, computer predictions of protein structures, and low-resolution images of individual virus particles collected by electron microscopy.

Dr. Ed Hutchinson, a research fellow at the CVR who led the virology work in this project, said, "No single experiment can directly produce a detailed image of a SARS-CoV-2 virus particle. Not only are they incredibly small, like all viruses, but they are also irregular - every virus particle is slightly different from the next – and getting detailed information requires each component of the virus to be studied in isolation."

Viruses are extremely small and the majority of viruses are smaller than the wavelength of light. So, a light-based microscope can’t be used to see them. One prominent method that can be used to see viruses and learn more about them is electron microscopy.

Electron Microscopy allows us to see objects smaller than the wavelength of light by sending a beam of electrons through a thin slice of film or material.

The basic principle of the electron microscopy technique is that as the target virus particles are projected by a beam of electrons, the denser areas absorb the electrons and other areas allow the electrons to pass through and be detected by a photographic plate.

Annabel Slater, one of the collaborators and a freelance scientific illustrator and graduate of The Glasgow School of Art said: "I think making scientific images into something 3D, opens up a whole new world of interaction, exploration, and understanding. The science of a virus can be better understood by making the virus particle into something tangible and interactable. I hope these models of the SARS-CoV-2 virus particle will help people by making the invisible visible."

The coronavirus particle works to safely deliver its genetic information which in this case is RNA to the appropriate host cell and initiate a new infection. In SARS-CoV-2, RNA is packaged within an outer fatty or lipid membrane which is why they are called an enveloped virus. The fatty membrane of SARS-CoV-2 contains virus proteins. The membrane acts like a bag that holds and protects the RNA and it open inside the host cell to release the RNA to transmit and replicate the virus.

In SARS-CoV-2, the virus genome provides the necessary genetic information required to produce the four structural proteins; the Spike (S), Envelope (E) and Membrane (M) proteins, and the Nucleocapsid (N) protein that tightly packs around and protects the RNA. These protein structures are shown in the figure.

The Spike (S) protein is all essential for attaching the virus with the host cell to enter and to attack. On the outer membrane, individual S proteins are arranged in groups of three, and this grouping gives the virus a distinctive crown or 'corona'-like appearance which is typical of coronaviruses.

The overall structure of the S protein was described using cryo-electron microscopy technique.

The M protein is the most abundant of all the structural proteins and is responsible for giving the virus its shape and it is also believed to play a role in the final stages of infection when new virus proteins are assembled into particles before they are released and move on to infect new cells.

The lowest number of structural proteins present in SARS-CoV-2 is the E protein. This protein is believed to have several functions that contribute to virus growth and its ability to cause disease but still much remain to understand about this.

To deliver genetic instructions in the form of RNA across the membrane of uninfected human cells, to allow newly-made RNA to escape from an infected cell, and to protect the RNA during its journey to discover new, uninfected cells are the three main activities of the coronavirus. The RNA is contained within an outer fatty membrane and the three viral proteins called a spike, membrane, and envelope are embedded in this outer membrane which gives the virus its distinctive shape and structure.

The coronavirus RNA molecule is one of the largest amongst all RNA viruses at 30,000 'letters' long, which is about twice the size of the influenza A genome, but still 100,000 times smaller than the human genome (over 3 billion 'letters' long).