At last, Atomic Structure of a Glass have been Imaged 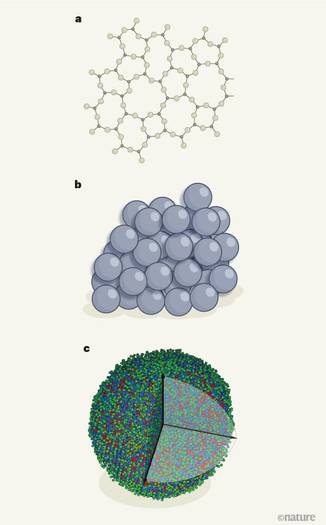 The atomic structure of glasses. Knowledge of glass structure has been based on long-standing models developed from simple physical principles. a, For glasses in which the atoms are covalently bonded, a continuous random network of atoms has been proposed to form, in which bond lengths and angles between atoms are preserved (credit). b, For metallic glasses, the structure was thought to involve the dense random packing of spherical atoms (credit) . c, Yang et al. have used a method called atomic-resolution electron tomography to determine the position of every atom in a nanometre-scale sample of a metallic glass. Although the authors could not specifically identify the element for each atom, they did assign each atom to one of three types, each including either two or four of the eight elements in the glass. The availability of fully resolved atomic data for glasses represents a step change in understanding compared with a and b.

Understanding the chemical element and 3D location of atoms in materials have been always at the forefront in the field of material science. The atomic positions of crystals have long-range periodicity and for such solids diffraction technique in combination with the mathematics of symmetry can be used to determine their precise atomic structure. However, amorphous (non-crystalline) materials like plastics and glass lack long-range periodicity and so the existing methods do not work, inturn our knowledge of the atomic structure of such materials is therefore limited and acquired indirectly.

But a team of researchers reports the experimental determination of the 3D positions of all the atoms in a nanometre-scale sample of a metallic glass.

Over the years, a number of experimental and computational methods have been used to study the metallic-glass structure, such as X-ray and neutron diffraction, X-ray absorption fine structure, high-resolution transmission electron microscopy, fluctuation electron microscopy, ångström- and nano-beam electron diffraction, nuclear magnetic resonance, density functional theory, molecular dynamics simulations and reverse Monte Carlo modeling. However, despite all these developments, no experimental method has been able to directly determine all the 3D atomic positions in metallic-glass samples. Here, the team used atomic electron tomography (AET) to solve the long-standing problem.

Basically, they used the atomic-resolution electron tomography method which has been in use to determine the atomic structure of crystals for a decade. In this method, 2D projections of the 3D atomic structure of a sample are acquired by passing a beam of electrons through the sample. As a result, a series of 2D images are produced by altering the orientation of the sample to the beam, and these images are then reconstructed into a 3D image of the whole sample.

For the study, they prepared the multi-component metallic nanoparticle samples by using thermal shock procedures published in an earlier study. Then the individual metal salts (chlorides or their hydrate forms) were dissolved in ethanol at a certain volume. After complete dissolving with hydrochloric acid, the individual salt precursor solutions with different cations were mixed and sonicated for 30 min. The homogeneously mixed precursor solution was loaded onto carbon substrates (reduced graphene oxide) and heated to a temperature as high as 1,763 K for 55 ms and the temperature was monitored by a high-speed Phantom Miro M110 camera with a pixel size of 25 μm.

Thermal Shock refers to the process that the sample experiences suddenly changed thermal stresses and strains of large magnitude when the heat flux and component temperature gradient change abruptly.

Now the sample was suspended on a trench and connected with copper electrodes by silver paste for both heating and effective cooling. Then the sample was cooled at a certain rate so the metallic glasses can be formed. The resulting nanoparticles were dispersed in ethanol with sonication and deposited onto 5-nm thick silicon nitride membranes where they were baked at 373 K for 12 hours in a vacuum. This heating will eliminate any hydrocarbon contamination that may present in the sample.

Every cubic nanometre of glass has a unique structure due to which the team was unable to use the existing tomographic reconstructions. So, they used a combination of state-of-the-art computational imaging techniques - including sophisticated methods to correct distortions and to reduce noise that obscures the image signal. Then they collected the data by conducting several steps like image pre-processing and denoising, REal Space Iterative REconstruction (RESIRE) algorithm, determination of 3D atomic coordinates and species, and refinement of 3D atomic coordinates.

The authors’ structural analysis provides support for a model in which solute atoms (those that occur in small quantities in the glass) are found at the centers of clusters of solvent atoms (which account for the majority of the atoms).

The study shows that in the glass some clusters are densely packed while some are not. They think that the observed loose packing of some clusters might be a product of the extremely rapid cooling that was used to synthesize the studied glasses, but it could also point to important gaps in current models.

It could also open the way to techniques for characterizing structural defects in glasses; such characterization is currently restricted to defects that have a spectroscopic signature. So, the understanding of complete structure data for more metallic glasses could provide aid to the development of methods for discovering new glass-forming alloys. One of the commonly known examples that this finding contributes is the LIGO experiment; where the efficiency is being limited by glass defects known as two-level systems, which can be detected only by their effects, not by their structure.