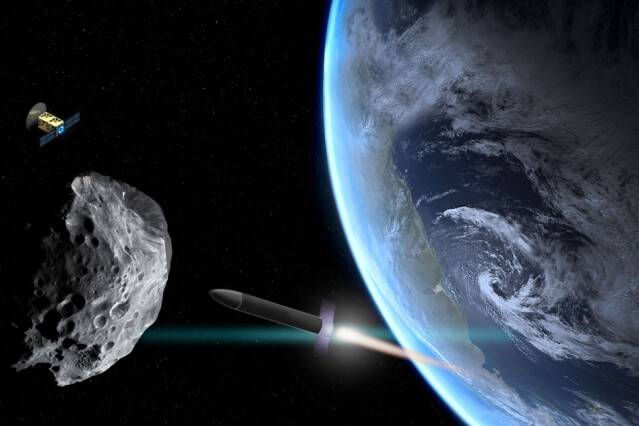 MIT researchers have devised a framework for deciding which type of mission would be most successful in deflecting an incoming asteroid, taking into account an asteroid’s mass and momentum, its proximity to a gravitational keyhole, and the amount of warning time that scientists have of an impending collision. Image © Christine Daniloff, MIT.

An icy chunk of space rock, the asteroid named 99942 Apophis, compared as bigger than the Eiffel Tower, will be crossing approaching at 30 kilometres per second the Earth's orbit in the next decade. Astronomers say it will be one of the largest asteroids to cross that close to Earth's orbit in the next decade. It is predicted that on April 13, 2029, that icy chunk will be at the planet Earth's sphere of geostationary satellites- a location in Earth's gravity field. After this, the asteroid will be on its next flyby and as predicted in the year 2036, it would likely make a devastating impact hitting the Earth's surface and most scientists believe it is never too early to consider strategies for deflecting an asteroid if one were ever on a crash course with our home planet.

A group of researchers at MIT applied their hypothetical deflection methods to the astroids Apophis and Bennu, an asteroid currently being targeted by a NASA mission to return a sample of its surface material to Earth in 2023, and the study was published in the journal Acta Astronautica titled as "Optimization and decision-making framework for multi-staged asteroid deflection campaigns under epistemic uncertainties."

Using simulations, they tested three alternative missions. The first involved a kinetic impactor - a projectile that interrupts the path of an approaching near-Earth object to knock it off track. The second considered sending a "scout" before the projectile to measure the asteroid and advise scientists on what type of projectile to use. And the third sending two scouts - one to advise specs and one to nudge the asteroid slightly off course before the projectile is brought in. The last requires more warning time, but it would have a greater chance of missing Earth.

They added, because Bennu's material composition is better understood, it may not be as necessary to use scouts prior to sending the projectile.

Olivier de Weck, a professor of aeronautics and astronautics and engineering systems reports that in order to deflect an asteroid using any kinetic impactor, we must need to know the properties such as its mass, momentum, trajectory, and surface composition of the asteroid as precisely as possible taking uncertainty that may exist into account. About this study, he said "does it matter if the probability of success of a mission is 99.9 percent or only 90 percent? When it comes to deflecting a potential planet-killer, you bet it does. Therefore we have to be smarter when we design missions as a function of the level of uncertainty. No one has looked at the problem this way before."

Sung Wook Paek and his colleagues also studied for the gravitational keyhole. They developed a simulation code to identify the type of asteroid deflection mission that would have the best possibility of success, given an asteroid's set of uncertain properties.

Sung Wook Paek, lead author of the study and a former graduate student in MIT's Department of Aeronautics and Astronautics said, "People have mostly considered strategies of last-minute deflection when the asteroid has already passed through a keyhole and is heading toward a collision with Earth." Paek added, "I'm interested in preventing keyhole passage well before Earth's impact. It's like a preemptive strike, with less mess."

The researchers fed into the simulation specific variables such as the asteroid's mass, momentum, and trajectory, as well as the range of uncertainty in each of these variables. The researchers tested their simulation on Apophis and Bennu. They simulated various distances between each asteroid and their respective keyhole, and also calculated for each distance a safe harbour region where an asteroid would have to be deflected so that it would avoid both an impact with Earth and passing through any other nearby keyhole. At last, they evaluated which of the three main mission types would be most successful at deflecting the asteroid into a safe harbour, depending on the number of times scientists have to prepare.

Paek said, "Instead of changing the size of a projectile, we may be able to change the number of launches and send up multiple smaller spacecraft to collide with an asteroid, one by one. Or we could launch projectiles from the moon or use defunct satellites as kinetic impactors. We've created a decision map that can help in prototyping a mission."

In the future with the team's new simulation tool, Paek plans to estimate the success of other deflection missions involving on problems like how do multiple smaller projectiles compare to one large one, for example. And what would happen if you changed the site of the launch from Earth to the moon?