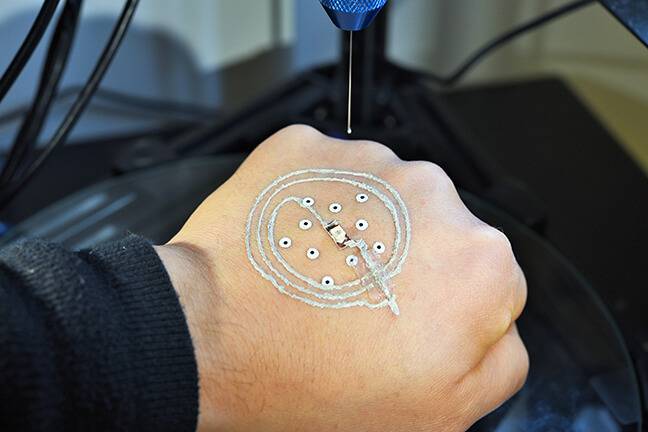 One of the key innovations of the new 3D-printing technique on skin is that the printer uses computer vision to track and adjust to movements in real-time. Image credit: McAlpine group, University of Minnesota

For the first time, a team of researchers from the University of Minnesota in Minneapolis developed a customized, low-cost 3D printer that can print electronics on a real hand. This new 3-D printer can draw a precise pattern of electrically conductive material directly on a person’s skin, creating temporary, tattoolike electronic devices and could be useful for soldiers to print temporary sensors on their bodies to detect chemical or biological agents or solar cells to charge essential electronics.

Michael McAlpine, an engineer at the University of Minnesota in Minneapolis, and colleagues used a new computer version that can compensate for a moving printing surface and constructed wearable LEDs. The new printer uses computer vision to adjust to movements in real-time.

The research finding was published in the journal Advanced Materials.

Michael McAlpine, the study’s lead author and the University of Minnesota Benjamin Mayhugh Associate Professor of Mechanical Engineering said, "We are excited about the potential of this new 3D-printing technology using a portable, lightweight printer costing less than $400." McAlpine added, "We imagine that a soldier could pull this printer out of a backpack and print a chemical sensor or other electronics they need, directly on the skin. It would be like a ‘Swiss Army knife’ of the future with everything they need all in one portable 3D printing tool."

In the fabrication of next-generation wearable devices, a vital challenge among researchers was to create a smooth and continuous, with no apparent gaps or spaces between biological systems and multifunctional devices. But diminishing the gap between the interface is really a hard task. This can be due to the small or we thought insignificant movement of the samples or the incompatibility of the products.

McAlpine said, "No matter how hard anyone would try to stay still when using the printer on the skin, a person moves slightly and every hand is different. This printer can track the hand using the markers and adjust in real-time to the movements and contours of the hand, so printing of the electronics keeps its circuit shape."

Though some commercial wearable electronic devices are available, these devices are either rigid or soft but of determinant shape. So, these are often incompatible with target biological surfaces that possess highly arbitrary, dynamically varying geometries, such as skin and tissues. One approach that can be used to rectify this problem is to fabricate a flat device with thin, deformable materials using microfabrication, and subsequently transfer it to the target surface for a conformal interface. McAlpine’s team suggested that their devices can autonomously fabricate without the need for microfabrication facilities in freeform geometries that are actively adaptive to target surfaces in real-time, driven by advances in multifunctional 3D printing technologies.

To enable adaptive 3D printing on moving freeform surfaces, a closed-loop feedback system is required to allow real-time corrections of printing errors introduced by the dynamically changing workspace. McAlpine’s team reported an adaptive 3D printing, for the fabrication of multifunctional devices on moving freeform surfaces. They highlighted on the researcher report that their approach advances the previously available technologies further by 1) compensating for the full six degrees of freedom of rigid body motions; 2) being applicable to more general tasks with arbitrary shapes of the target surface; 3) being compatible with a continuous, extrusion-based printing method in order to achieve a faster speed of fabricating 3D structures and to make use of a diverse palette of functional materials; and 4) demonstrating the printing of functional electronic devices as a proof of concept.

They demonstrated that the changes of states in the 3D printing workspace in terms of the geometries and motions of target surfaces can be perceived by an integrated robotic system aided by computer vision. This hybrid fabrication procedure combines 3D printing of electrical connects and yields functional electronic devices on a free-moving human hand.

For the new technique designed by McAlpine’s team, the geometric information of the target surface is first acquired in the form of a dense point cloud via a structured light scanner and then fed back to the motion controller for adaptive 3D printing after the acquired information is combined with a realtime estimation of the rigid-body motion of the target surface. Now a discrete electronic component, such as a surface-mounted LED, is first pick-and-placed onto the target surface automatically. To create the electronic circuits, functional inks, such as conductive and insulator inks, are directly printed onto the moving target surface. Now the printed devices are finally dried at room temperature and powered by a wireless transmission system.

The designed conductive inks must meet criteria like the viscosity of the ink should be tunable while maintaining self-supporting structures, the ink solvent should evaporate quickly such that the device becomes functional on the same timescale as the printing process, and the printed electrodes should become highly conductive under ambient conditions. To meet these criteria, McAlpine’s team developed a highly conductive, water-soluble ink by adding silver flakes to poly(ethylene oxide) with water and ethanol as solvents. All inks exhibited a typical shear-thinning behavior, which is desirable for controllable extrusion during 3D printing. To increase the evaporation speed so the ink drying time will be small, they added ethanol on the ink.

Finally, an adaptive 3D printing platform was developed to directly fabricate a wearable wireless device on a moving human hand. This mainly consisted of a delta robot, monitor cameras for long-distance observation of printing states, and tracking cameras mounted on the robot end-effector for precise localization of the target surface and the spatial fidelity of the printed structure on a moving surface depends on three system specifications like the diameter of the extrusion nozzle, image resolution and processing errors in the visual tracking system, and the resolution and accuracy of the 3D printer.

Now effort that needed to remove wearable devices is also an important feature. The study from the McAlpine’s team showed that the interfacial bonding between the skin and ink was sufficient to hold the printed form of the devices on the human's hand for more than 2 hours without detachment. They also observed that the devices could be simply removed off the skin by a pair of tweezers and, importantly, without destructive deformation of the electric device.

McAlpine said, "I'm fascinated by the idea of printing electronics or cells directly on the skin. It is such a simple idea and has unlimited potential for important applications in the future."

About the future study they highlighted some as, optimizing the adaptive printing system to reduce printing time and improve printing fidelity for fine and more sophisticated electronics, integrating multifunctional electronic components in the wirelessly powered devices for active bio-machine interfacing, optimizing the moisture sensor as a sweat sensor for wireless monitoring of physical exertion or stress levels, printing layered structures of gene-corrected cells as skin substitutes, for in vivo studies on improved wound healing, applying adaptive printing to insects and animals for large-scale production of cyborgs as self-distributed data collectors in ecosystems.