New form of Carbon Nanostructure is Stronger Than Diamond 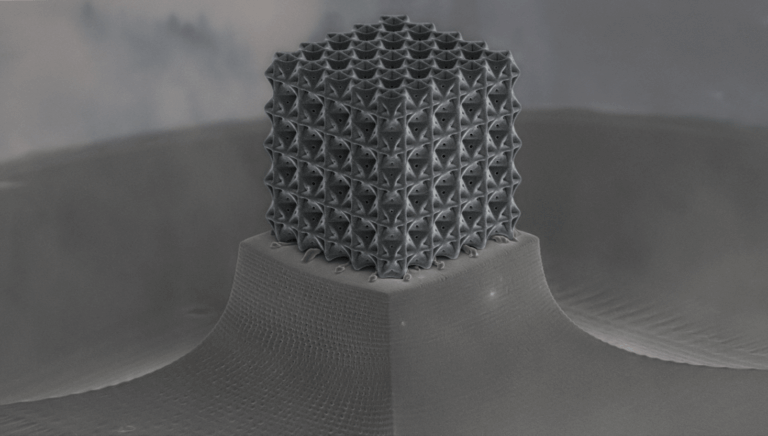 With wall thicknesses of about 160 nanometers, a closed-cell, plate-based nanolattice structure designed by researchers at UCI and other institutions is the first experimental verification that such arrangements reach the theorized limits of strength and stiffness in porous materials. Image credit: Cameron Crook and Jens Bauer / UCI

You may have heard that diamond is the strongest of all materials but this is proven a wrong statement by a team of researchers from the University of California, Irvine in a collaboration with a few other institutions. The team architecturally designed plate nanolattices – nanometer sized carbon structures – that are stronger than diamonds as a ratio of strength to density.

The research was published on 27 March 2020 in the journal Nature Communications.

"Previous beam-based designs, while of great interest, had not been so efficient in terms of mechanical properties," said corresponding author Jens Bauer, a UCI researcher in mechanical & aerospace engineering. "This new class of plate-nanolattices that we’ve created is dramatically stronger and stiffer than the best beam-nanolattices."

The beam-based lattices have dominated mechanical metamaterials for the past two decades but the theoretical stiffness and strength limits of any isotropic cellular topology limit their performance. An alternative to this beam-based lattice, plate-based designs are predicted to reach the upper bounds but the experimental verification was remained elusive due to significant manufacturing challenges. Researchers from the University of California, Irvine, and a few other institutions present a new class of nanolattices that is constructed from closed-cell plate-architectures. They fabricated carbon plate-nanolattices via two-photon lithography and pyrolysis and via in situ mechanical compressions, nano-computed tomography (nano-CT), and micro-Raman spectroscopy they reached the Hashin-Shtrikman and Suquet upper bounds and provides detailed experimental evidence of plate architectures as a superior mechanical metamaterial topology.

Several critical fabrication challenges were overcomed by the team during the process including the removal of excess raw material pockets, design of printing strategies to ensure homogeneous material properties for plates of different orientations and thicknesses, and management/optimization of shrinkage during pyrolysis.

They claimed that the plate-nanolattices designed by the team demonstrate an average stiffness and strength improvement of up to 522 % and 639% at a given relative density, respectively, compared to pyrolytic carbon octet-truss, and isotropic truss nanolattices, the most advanced mechanical metamaterials reported to date.

The outcome of the research was verified by members of the architected materials laboratory of Lorenzo Valdevit, UCI professor of materials science & engineering as well as mechanical & aerospace engineering, using a scanning electron microscope and other technologies provided by the Irvine Materials Research Institute.

"Scientists have predicted that nanolattices arranged in a plate-based design would be incredibly strong,” said lead author Cameron Crook, a UCI graduate student in materials science & engineering. “But the difficulty in manufacturing structures this way meant that the theory was never proven until we succeeded in doing it."

More about the achievement, Jens Bauer said that the entire process depends on a complex 3D laser printing process called two-photon polymerization direct laser writing. A laser is focused inside a droplet of resin which is ultraviolet-light-sensitive liquid. Then the material becomes a solid polymer where molecules are simultaneously hit by two photons and the technique enabled us to render periodic arrangements of cells, each consisting of assemblies of plates as thin as 160 nanometers.

Moreover, one of the innovations of the group was to include tiny holes in the plates so that they could be used to remove excess resin from the finished material. Finally, the lattices move through pyrolysis, wherein it is heated to 900 degrees Celsius in a vacuum for one hour. According to Bauer, the end result is a cube-shaped lattice of glassy carbon that has the highest strength scientists ever thought possible for such a porous material.

"As you take any piece of material and dramatically decrease its size down to 100 nanometers, it approaches a theoretical crystal with no pores or cracks. Reducing these flaws increases the system’s overall strength," Bauer said.

Valdevit, who directs UCI's Institute for Design and Manufacturing Innovation, added, "While the theoretical performance of these structures had been predicted before, we were the first group to experimentally validate that they could perform as well as predicted, while also demonstrating an architected material of unprecedented mechanical performance."

About the future consequences and the limitation they mentioned that the two-photon-polymerization direct laser writing (TPP-DLW)/pyrolysis fabrication route developed in this work is limited to small specimens. Plate-lattices with exceptional size-strengthened constituent materials may be manufactured by more scalable techniques (e.g., projection micro-stereolithography) using preceramic resins which exploit size effects into the micrometer range coupled with dramatically reduced shrinkage during pyrolysis. Hence, plate-nanolattices deserve strong attention in the development of scalable high-resolution additive manufacturing processes which might in the future make carbon-based nanoarchitecture metamaterials as ubiquitous as carbon composites have become in modern engineering applications.