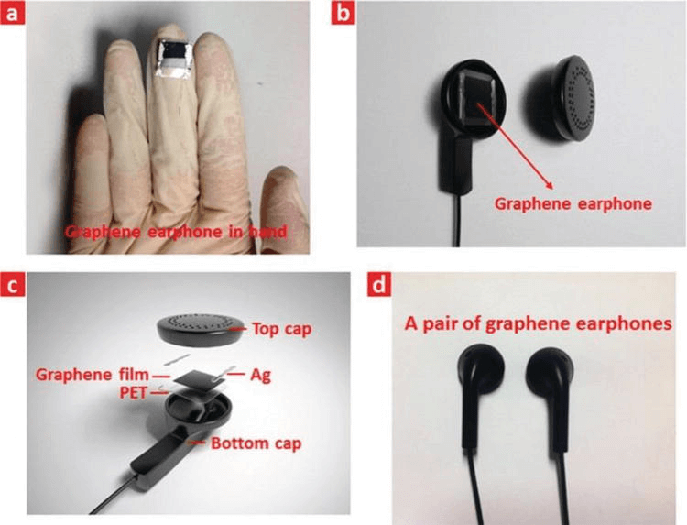 Image shows the demonstration of graphene earphones that researchers made during the study.

The most used technology of using acoustic waves to communicate with each other seems to be on the horizon as the new technology of ultrasonic waves is being developed. This ultrasonic method of transmitting the sound waves is more fascinating since they do not interfere with normal voice communication and can be highly directional with long-range and so wireless ultrasonic sound transmission will be more powerful and uninterrupted.

A team of researchers at UC Berkeley and Berkeley Lab found that graphene has mechanical properties that will make it ideally suited for wide-band ultrasonic transduction and using simple and low-cost fabrication they have prepared a prototype of an ultrasonic microphone and ultrasonic radio.

A research paper describing the work was published in the journal Proceedings of the National Academy of Sciences (PNAS).

About 90% of the electrical energy supplied is wasted by the sound devices like mics and speaker that we are normally using today but this graphene-based sound device will have nearly 100% efficient sound transducer: picking up sound like a microphone, and reproducing sound like a speaker.

The research team took advantage of the system where the speaker and microphone both use diaphragms which are typically made of paper or plastic. On the newly designed sound devices, the diaphragms are of graphene sheets which will have one atom thickness and that will have the right combination of stiffness, strength, and lightweight to respond to frequencies ranging from subsonic (below 20 hertz) to ultrasonic (above 20 kilohertz).

UC Berkeley physicist Alex Zettl said, "Sea mammals and bats use high-frequency sound for echolocation and communication, but humans just haven’t fully exploited that before, in my opinion, because the technology has not been there", and added "until now, we have not had good wideband ultrasound transmitters or receivers. These new devices are a technology opportunity."

In addition, using it in sound devices, due to its long-range and highly directional capacity this technology can also be used by communications devices like cellphones that will utilize not only electromagnetic waves - radio - but also acoustic or ultrasonic sound.

Adding more on the promising aspects of graphene in such a device, a postdoctoral fellow, Qin Zhou said, "because our membrane of graphene is so light, it has an extremely wide frequency response and is able to generate sharp pulses and measure distance much more accurately than traditional methods."

Also, in corresponding research (peer-reviewed chapter) a team of researchers claimed that they have innovated the first graphene earphone, which can be used both for humans and animals and further issued more details for developing those graphene acoustic devices.

This team used the laser scribing method to prepare graphene due to its advantage of low cost and high speed. The earphone based on laser scribed graphene (LSG) can cover audible range and ultrasonic range.

He also addressed that this all may take one or two more years and this new technology will be reachable to the general public.