Planet WASP-76b Rains Iron and Here is Why 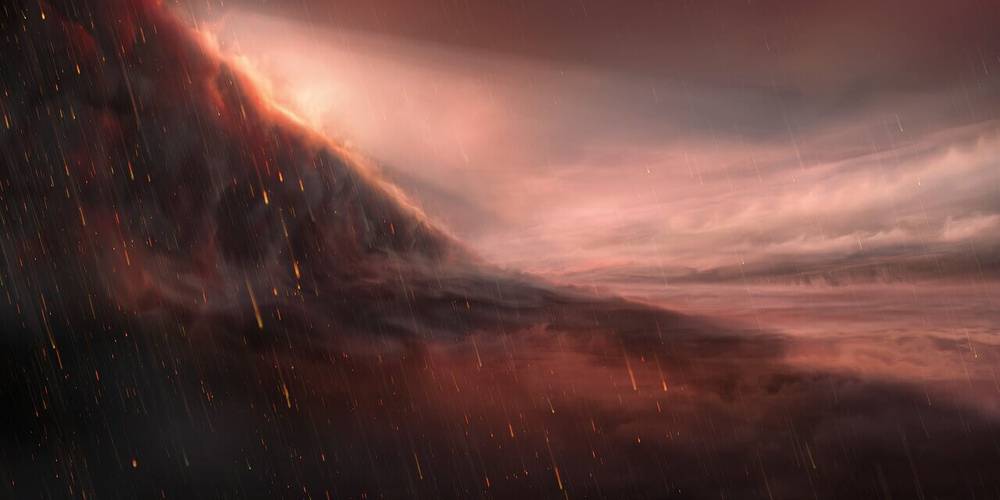 Artist’s impression of the night side of WASP-76b. Image credit: ESO/M. Kornmesser

The universe is immensely vast and full of an enormous number of mysterious objects like planets, stars, black holes, etc, and their puzzling phenomenon. Humans are in a long haul of exploring the perplexing universe and understanding them and for this human have greatly leaped in the technological revolution.

In the course of exploring the exoplanet, astronomers have found strange planet systems and one is an exoplanet system where it rains iron.

Yes, you read it right! Astronomers using European Southern Observatory’s (ESO) telescope - Very Large Telescope (VLT) observed an exoplanet, WASP-76b, where it rains iron on its atmosphere like it rains water (H2O) on our planet- Earth.

The team observed the planet’s two transits period phenomenon of 1.81 days. First, they observed the transit for on 2 September 2018 and 30 October 2018 by using the Echelle Spectrograph for Rocky Exoplanets and Stable Spectroscopic Observations (ESPRESSO) at the European Southern Observatory Very Large Telescope (VLT) located on Cerro Paranal, Chile.

ESPRESSO, combining light from the Unit Telescopes makes the VLT the largest optical telescope in existence in terms of collecting area.

ESPRESSO is specially designed to make very high precision radial velocity measurements of solar-type stars to search for rocky planets and for this precise measurement ESPRESSO is loaded by four Unit Telescopes (UTs) of the VLT. The 4 UTs loaded at ESPRESSO can measure fainter objects in the sky with greater accuracy and can also combine unprecedented radial velocity measurement accuracy with the large collecting area of the UTs.

David Ehrenreich, a professor at the University of Geneva in Switzerland and the leader of the study said, “One could say that this planet gets rainy in the evening, except it rains iron.”

The team found that the radial velocity of the planetary signature slightly blueshifted (between 0 and −5 km s-1) at ingress. The blueshift (remember that the blueshift arises due to the change in the radial velocity of the planet) gradually down to about −11±0.7 km s-1 and it remained blueshifted until the end of the transit. They performed a new photometric analysis based on all six existing transit light curves of WASP-76b obtained with the EulerCam instrument at the Swiss Euler 1.2 m telescope in La Silla, Chile.

The team also produced 1D spectra and cross-correlation functions (CCFs) and observed that spectra contain 4,653 spectral lines in the wavelength range between 380 and 788 nm covered by ESPRESSO; most of the spectroscopic information in the mask is contained in electronic transitions of neutral iron.

Researchers also explained the reason behind raining iron on the planet WASP-76b. WASP-76b orbits a star system named WASP-76 and only show its one face - its day side, to its parent star so its always night side remains in complete darkness. Due to continually showing, its day side receives thousands of times more radiation from its parent star than the Earth does from the Sun and also its night side. It is estimated that the temperature on the day side reaches to more than 2500 K whereas the night side has just about 1500 K. The day

side of the planet is so hot that molecules separate into atoms, and metals like iron evaporate into the atmosphere. Then the extreme temperature difference between the day and night sides results in vigorous winds that bring the iron vapour from the ultra-hot day side to the cooler night side, where temperatures decrease to around 1500 degrees Celsius.

Astronomers also detected a strong signature of iron vapour at the evening border that separates the planet’s day side from its night side.

David Ehrenreich, said,  “Surprisingly, however, we do not see the iron vapour in the morning because it is raining iron on the night side of this extreme exoplanet.”

María Rosa Zapatero Osorio, an astrophysicist at the Centre for Astrobiology in Madrid, Spain, and the chair of the ESPRESSO science team said, “The observations show that iron vapour is abundant in the atmosphere of the hot day side of WASP-76b. A fraction of this iron is injected into the night side owing to the planet's rotation and atmospheric winds. There, the iron encounters much cooler environments condense and rains down."

Recent theoretical progress and the understanding of ultra-hot atmospheres are the basis, but not enough, so further analysis is required to finely interpret spectroscopically- and temporarily-resolved measurements.

The research study was published in the journal Nature on 11 March 2020.