Protostar and It's Evolution 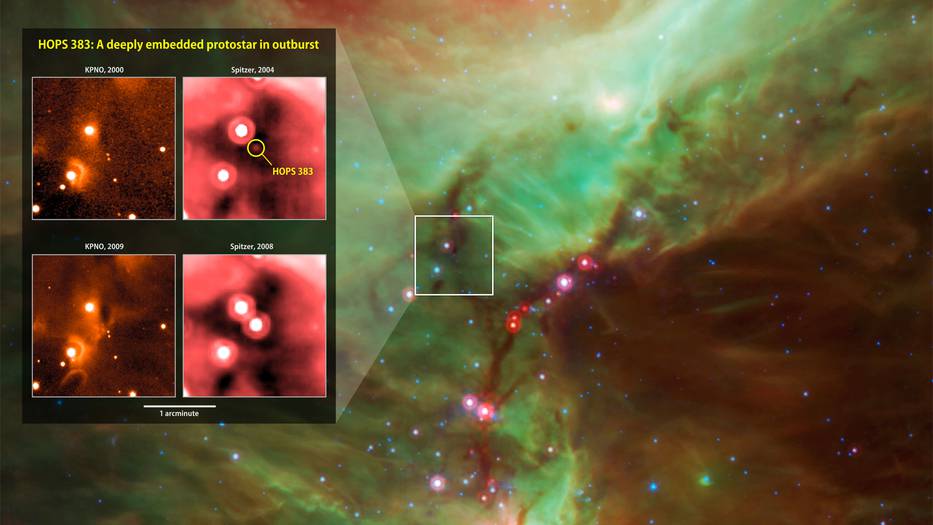 Infrared images from instruments at Kitt Peak National Observatory (left) and NASA's Spitzer Space Telescope document the outburst of HOPS 383, a young protostar in the Orion star-formation complex. The background is a wide view of the region taken from a Spitzer four-colour infrared mosaic. Image © NASA/JPL-Caltech/Univ. of Toledo; background: E. Safron et al.

Star formation begins in the molecular cloud where each dense core is initially in a balance between self-gravity, which tends to compress the object, and both gas pressure and magnetic pressure, which tend to inflate it.

Starting from the molecular clouds, the evolution of stars leads to mysterious objects like a black hole, neutron stars, and dwarfs and so the stars' formation and evolution process is an important event in the vast universe as many secrets can be explored by understanding this.

Protostar is a very young star (the first stage of the star formation) which is still gathering mass from its surrounding, primarily from the molecular cloud.

This stage begins when the different fragments of molecular cloud collapse under the force of self-gravity and an opaque, pressure supported core forms inside the collapsing fragment and end when infalling gas is depleted, leaving a pre-main-sequence star, which contracts to later become a main-sequence star at the onset of hydrogen fusion producing helium. This stage lasts at least about 500,000 years, for a low mass star like our sun.

The observations seem to indicate that stars are not formed individually but in larger groups and the theoretical calculations confirm that the formation of single stars is almost impossible.

The modern picture of protostars that is currently accepted was first suggested by Chushiro Hayashi in 1966. Under the suitable and enough conditions, the interstellar molecular cloud starts to contract and that collapse toward the centre of the dense core first builds up a low-mass protostar, and then a protoplanetary disk orbiting the object. As the collapse continues, an increasing amount of gas impacts the disk. Although it is not well observed and understood, the outer surface of a protostar consists partially of shocked gas that has fallen from the inner edge of the disk.

As the hydrogen-1 still remains to fuse, the interior has a lower temperature than an ordinary star. However, by theory, deuterium starts to fuse with hydrogen-1 and produces helium-3.

This heat from the fusion is what determines the size of the youngest observed pre-main-sequence stars as the heat tends to follow outward.