Levitating Objects of Micrometers to Meters by Light 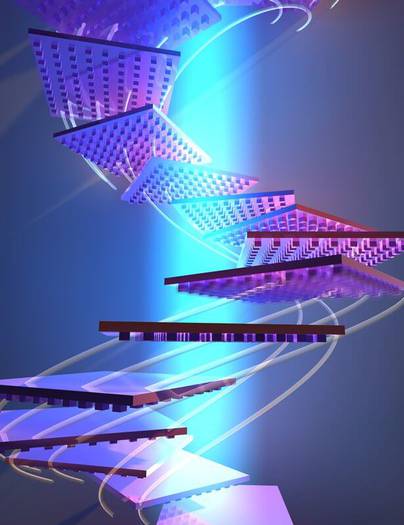 Conceptual illustration of a nano-patterned object reorienting itself to remain in a beam of light. Image credit: Atwater laboratory.

Now objects of micrometers to meters can also be Levitated by using light and researchers think this facility can be used in space flights and also controlling the trajectory for next-generation lightweight satellites.

Light is a powerful tool to manipulate matter, but existing approaches often necessitate focused, high-intensity light that limits the manipulated object’s shape, material, and size. Among the conventional approaches for light-based mechanical manipulation, most notably particle optical tweezing and transport, the trapping potential is realized by focusing and shaping the light beam to realize field intensity gradients that trap the particle. Such optical manipulation methods have become important research tools, with wide-ranging applications in biology and biomedicine, microfluidics, and colloidal science. Recently in past years of decades, there has been a growing interest in levitation dynamics in optomechanical systems, including passive and active feedback schemes, for realizing quantum mechanical superposition, ground-state cooling, and coherent manipulation of mechanical systems.

A team of researchers from the California Institute of Technology (Caltech) highlighted the limitations of some of the existing methods for mechanical manipulation of matter and provide us with new insight for the manipulation method. Researchers from Caltech showed that mechanical stability of macroscopic structures could be realized by tailoring the scattering anisotropy on the nanoscale and by incorporating nanophotonic elements with tailored anisotropic scattering that control the phase of light refracted from different points on the object’s surface. They claimed by this process they can realize self-restoring mechanical behaviour that is robust to perturbations.

The research was done by Harry Atwater, Howard Hughes Professor of Applied Physics and Materials Science in Caltech's Division of Engineering and Applied Science and paper describing the research work published in the journal Nature Photonics.

Optical Tweezer was developed decades ago and that enabled scientists to move and manipulate objects like nanoparticles. This technique basically uses the radiative pressure from a sharply focused beam of laser light.

The Nobel Prize in Physics 2018 was awarded "for groundbreaking inventions in the field of laser physics" with one half to Arthur Ashkin "for the optical tweezers and their application to biological systems", the other half jointly to Gérard Mourou and Donna Strickland “for their method of generating high-intensity, ultra-short optical pulses” which was based on the principle of optical tweezers.

To push the limitations of optical tweezers, researchers at Caltech have designed a way to levitate and propel objects of micrometers to meters scale by using only light. They have achieved this primarily by creating specific nanoscale patterning on the objects' surfaces.

Atwater said, "We have come up with a method that could levitate macroscopic objects," and added "there is an audaciously interesting application to use this technique as a means for the propulsion of a new generation of spacecraft. We're a long way from actually doing that, but we are in the process of testing out the principles."

There exist several ways through which a restoring torque can be generated for a structure that is displaced from its equilibrium position or orientation can be realized. Some include;

(1) superposition of scattering from arrays of nanoscale anisotropic scatterers

(2) phase-gradient metasurfaces, where the superposition of scattering phase and amplitude from each resonator element of an optical metasurface enables scattered wavefront control

Atwater and Hughes focus on generating the desired optical response as a collective effect and develop a class of nanophotonic elements that can exhibit passive and self-restoring dynamics.

To eliminate the moment and lateral force when the structure is in a symmetric equilibrium position (that is, centred on the beam) the team arranged the unit cells in a mirror-symmetric manner with respect to the structure’s centre of mass. An important feature of metasurface elements for passive stabilization (MEPS) is the asymmetry of the unit cell. This asymmetry ensures that a restoring torque can be generated for a structure that is rotated out of its equilibrium position. To evaluate the light-induced force on the unit cell of a particular structure and dimensions, they collected the intensity of light that is scattered into the relevant orders.

Researchers mentioned that engineered anisotropy of scattering is required, that a centrally symmetric arrangement relative to the centre of mass is beneficial, and that a class of subwavelength elements, consisting of dielectric resonators with an asymmetric unit cell, can impart mechanical stabilization when the structure is tilted and/or displaced from the beam axis. With such self-restoring behaviour, the light intensity, size, and weight of the structure can be chosen to achieve the desired dynamics (levitation, propulsion) along the axial (z) direction.

With this new achievement, the objects of varied shapes and sizes from micrometers to meters scale could now be manipulated by a light beam, and the for this is to create specific nanoscale patterns on an object's surface. These added patterns interact with light in such a way that the object can right itself when perturbed, creating a restoring torque to keep it in the light beam. So, instead of searching for more strong, powerful, and focused laser beams, the objects' patterning is designed to "encode" their own stability and by this new approach, the light source can also be at millions of miles away.

This advancement levitation technique can be used in space flight and in controlling the trajectory for next-generation lightweight satellites or propulsion of cosmic light sails, where this approach can give rise to passive stability of the light-sail structure riding an optical beam. Since this type of propulsion does not require fuel to be carried onboard the spacecraft, it could enable ultra-fast, even relativistic space-flight speeds necessary for scalable space exploration.