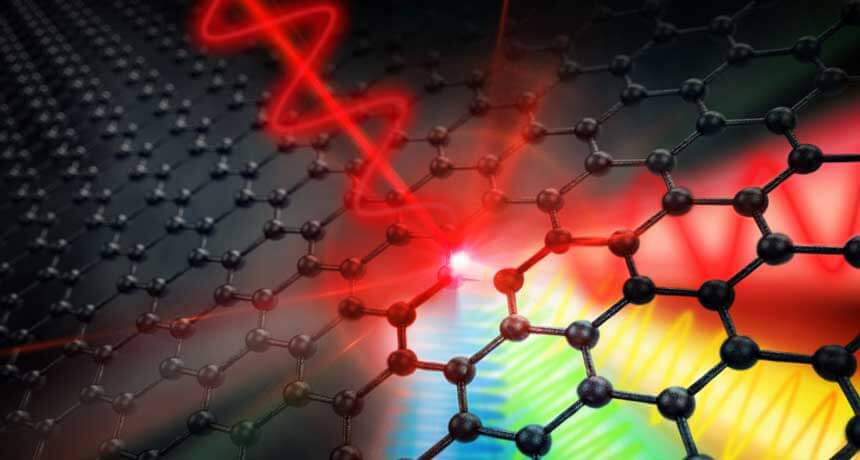 New experiments show that graphene is especially good at translating incoming signals of one frequency (illustrated in red) into signals of higher frequencies (yellow, green, and blue). Image credit: Juniks/HZDR

A new experiment by Physicist Helmholtz Zentrum Dresden-Rossendorf (HZDR) and the University of Duisburg-Essen (UDE), in cooperation with the Max Planck Institute for Polymer Research (MPI-P) showed that the single layer of carbon atoms (graphene) can transform electronic signals at gigahertz frequencies into higher-frequency terahertz signals and this can spread up to 1,000 times as much information per second. The graphene converted more than a thousandth, a ten-thousandth, and a hundred-thousandth of the original 300-gigahertz signal into waves at 0.9, 1.5, and 2.1 terahertz, respectively. [1 THz = 1012 hertz]

Prof. Mischa Bonn, Director of the MPI-P, and one of the researchers of the team in this work said, “Our discovery is groundbreaking. We have demonstrated that carbon-based electronics can operate extremely efficiently at ultrafast rates. Ultrafast hybrid components made of graphene and traditional semiconductors are also conceivable."

The terahertz gap lies in the region of the electromagnetic spectrum that is between the microwave and infrared radiation. T-rays have proved extremely challenging to detect, measure, and propagate and conventional silicon-based electronics have trouble handling such high-frequency signals. Also, previous experiments on the generation of optical harmonics in graphene critically relied on interband transitions in graphene in strong applied fields. Here, instead of sticking by a silicon-based device, a team from Dmitry Turchinovich of the University of Duisburg-Essen used graphene-based devices and report the generation of terahertz harmonics up to the seventh order in single-layer graphene at room temperature and under ambient conditions.

The research finding was published in the journal Nature, on 10 September 2018.

They found that the electromagnetic interaction occurred in a single atomic layer and the conversion efficiencies were high. They observed the terahertz harmonics generated via hot Dirac fermion dynamics directly in the time domain as electromagnetic field oscillations at these newly synthesized higher frequencies and stated that the collective thermal response of graphene’s background Dirac electrons was the key in driving terahertz fields.

The sample prepared by this team of researchers was typical monolayer graphene grown by chemical vapor deposition (CVD), deposited on a fused SiO2 substrate whose background free-carrier concentration of Nc = 2.1 × 1012 cm−2, Fermi level of EF = 170 meV at room temperature, and the electron momentum scattering time of τ = 47 fs.

The team performed the experiment at the High-Field High-Repetition-Rate Terahertz facility @ ELBE (TELBE) (Electron Linac for beams with high Brilliance and low Emittance) and this facility provides tunable, narrow-band, spectrally dense THz pulses in the frequency range between 0.1 THz and 1.2 THz with adjustable repetition rates up to the few 100-kHz regimes. For the generation of multicycle THz pulses, they used an undulator and the process called superradiance. In the standard mode of operation, a thermionic injector serves as the electron source and was used in most experiments. As an input fundamental driving field, they used linearly polarized THz pulses with central frequencies 0.3 THz, 0.37 THz, and 0.68 THz and was focused on the graphene sample at normal incidence, and the transmitted THz waves were detected behind the sample.

The impurities including the higher harmonic background were suppressed by appropriate shaping of the longitudinal electron bunch form and by additional narrow bandpass filters before the sample, creating highly monochromatic pump fields with a bandwidth of roughly 10%. Now the THz signal containing the remainder of the fundamental field, as well as the generated harmonics, was again sent through a set of bandpass filters with the transmission band centered at the generated harmonics to be detected. The resulting THz field was measured directly in the time domain by free-space electro-optic sampling (FEOS) and all measurements were carried out at room temperature and under ambient atmosphere.

Now for generation and detection of the seventh harmonic a fundamental frequency of 0.3 THz was chosen at 2.1 THz and to measure and quantify the electric field strength of the third harmonic generation (THG).

This also allowed them not only the detection of the seventh harmonic but also a simultaneous observation of the third and fifth harmonics at 0.9 THz and 1.5 THz.

They claimed, that the creation of nonlinear electrical currents resulting from the strongly nonlinear intraband THz conductivity of graphene background electrons, is the underlying physical mechanism of THz harmonic generation in graphene. For the intraband THz excitation of graphene, Nc is constant and the conductivity σ is thus governed by Te. If graphene is sufficiently doped, so that |EF| > kBTe, the rise in the electronic temperature leads to a reduction of conductivity (here kB is the Boltzmann constant).

These all interdependencies suggested that the THz conductivity of graphene depends strongly nonlinearly on the driving THz field: the stronger the field, the smaller the conductivity becomes.

The research team successfully designed a graphene-based system and demonstrated that the single-layer graphene can generate terahertz harmonics up to the seventh order, driven by terahertz fields of only tens of kilovolts per centimeter, and with field conversion efficiencies in excess of 10−3, 10−4 and 10−5 for the third, fifth and seventh terahertz harmonics, respectively.

Turchinovich explained, "The nonlinear coefficients describing the efficiency of the generation of this third, fifth and seventh harmonic frequency were exceptionally high. Graphene is thus possibly the electronic material with the strongest nonlinearity known to date. The good agreement of the measured values with our thermodynamic model suggests that we will also be able to use it to predict the properties of ultrahigh-speed nanoelectronic devices made of graphene."

They claimed their results provided a direct pathway to purely electronic THz frequency synthesis within the present generation of graphene transistors operating at fundamental frequencies of a few hundred gigahertz.

Prof. Dmitry Turchinovich said, "We were not only able to experimentally demonstrate a long-predicted effect in graphene for the first time, but also to understand it quantitatively well at the same time." Turchinovich added, “In my laboratory, we have been investigating the basic physical mechanisms of the electronic nonlinearity of graphene already for several years. However, our light sources were not sufficient to actually detect and quantify the frequency multiplication clean and clear. For this, we needed experimental capabilities which are currently only available at the TELBE facility."