New Graphene Foam Stays Squishy Even at the Coldest Temperatures 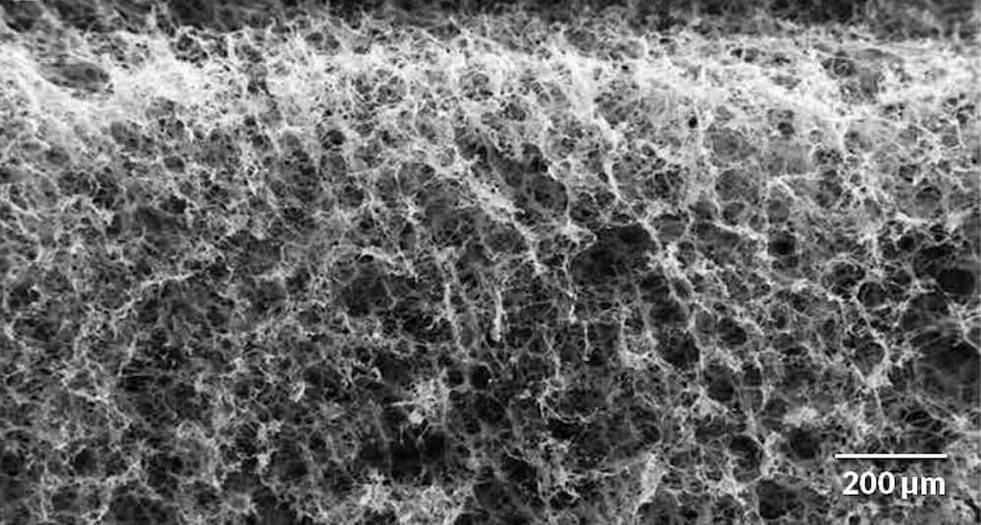 Typical elastic materials made from flexible polymers lose their elasticity at about 55 degrees Celsius. Of course, materials do exist that can handle frigid temperatures without breaking, but elasticity and ductility are generally compromised at these low temperatures.

Many applications like from aerospace to medical to oil and gas require materials that remain elastic, almost intact, at much lower temperatures and the material property has limited this requirement.

But now one group of materials that have been suggested for these applications by a team of researchers from Rice University, Houston, and at Nankai University, China is carbon nanomaterials.

A material that remains flexible at such low temperatures could be used to build devices for use in space, researchers report online April 12, 2019, in the journal Science Advances.

From the published paper, ‘Until now, materials with high elasticity at deep cryogenic temperatures have not been observed. Previous reports indicated that graphene and carbon nanotube-based porous materials can exhibit reversible mechano-elastic behavior from liquid nitrogen temperature up to nearly a thousand degrees Celsius. Here, we report wide temperature–invariant large-strain super-elastic behavior in three-dimensionally cross-linked graphene materials that persist even to a liquid helium temperature of 4 K, a property not previously observed for any other material. To understand the mechanical properties of these graphene materials, we show by in situ experiments and modeling results that these remarkable properties are the synergetic results of the unique architecture and intrinsic elastic/flexibility properties of individual graphene sheets and the covalent junctions between the sheets that persist even at harsh temperatures. These results suggest possible applications for such materials at extremely low-temperature environments such as those in outer space.’

Researchers explained in a recent paper, "Carbon nanomaterials, such as carbon nanotube (CNT) and graphene, have been thought as suitable building blocks for making temperature-invariant elastic materials because of their extraordinary mechanical properties, flexibility, and exceptional thermal stability. However, it has been a great challenge to realize these intrinsic properties in the bulk material scale, because restacking and/or agglomeration of nano-individuals (graphene sheets or nanotubes) severely diminish or weaken most of their intrinsic properties."

Though Carbon nanomaterials, such as carbon nanotube (CNT) and graphene, have been thought of as suitable building blocks for making temperature-invariant elastic materials because of their extraordinary mechanical properties, flexibility, and exceptional thermal stability, they also encompassed challenges. Because restacking and/or agglomeration of nano-individuals (graphene sheets or nanotubes) severely diminish or weaken most of their intrinsic properties, researchers faced problems in realizing the intrinsic properties in the bulk material scale.

Using a 3D cross-linked graphene foam they had previously developed, the researchers investigated the mechanical properties of graphene foam in liquid helium using a homemade in situ large-strain mechanical analysis system. Their system could continuously monitor material deformations from "deep cryogenic temperature at 4 K [-270°C] to a high temperature of 1,273 K [1,000°C]" without breaking the vacuum seal.

The team conducted their researcher in several stages, mainly including:

In the future, the researchers say that if similar bulk materials could be made from other 2D materials using the same assembly strategy, then "some unexpected and fascinating properties, not only the mechanical aspect, might be discovered."