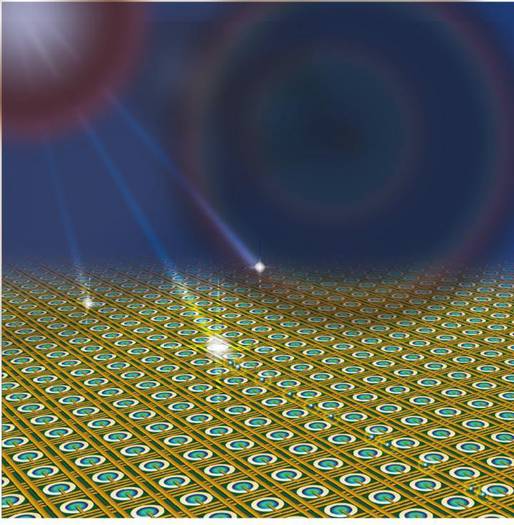 Imaging sensor technology has helped us in many sectors of science and technology. For instance, time-resolved imaging sensors enable a number of visualization techniques, such as time-of-flight (ToF) imaging, time-resolved Raman spectroscopy, fluorescence lifetime imaging microscopy, superresolution microscopy, etc. Similarly, Time-resolved single-photon imaging sensors enable, in addition, quantum vision techniques, such as ghost imaging, sub-shot-noise imaging, quantum LiDAR, quantum distillation, etc. For all these, we are required to have single-photon detection and high timing resolution technique that will also have low noise and high sensitivity.

The measurement of how long it takes individual photons to travel the distance from a source to the camera, known as time-of-flight.

There already exists photon-counting image sensors like quanta image sensor (QIS), camera based on time-gating or time-to-digital converters (TDCs) and single-photon avalanche diode (SPAD) attached camera system but these all have their own limitations in the real world. Quanta image sensor has a problem with timing resolution and time-to-digital converters is not suited for scaling due to large circuit area and high power dissipation.

A scientific paper describing the approach was published in the journal OSA, The Optical Society on 16 April 2020.

Edoardo Charbon from the Advanced Quantum Architecture Laboratory (AQUALab) at École polytechnique fédérale de Lausanne (EPFL) in Switzerland said, "Thanks to its high resolution and ability to measure depth, this new camera could make virtual reality more realistic and let you interact with augmented reality information in a more seamless manner."

In-pixel time-gating approaches involve compact pixel circuit and so is well-suited for the implementation of largescale time-resolved SPAD sensors.

This new approach arises from the basic understanding of SPAD sensors. SPAD sensors are highly efficient at detecting single photons and converting them into electrical signals that are stored in a digital memory and simply we can build a large format camera by building an array that each contains a SPAD.

Charbon said, "It (SPAD sensor) captures individual photons and converts them into electric signals that are stored in a digital memory system."

This newly designed sensor can also detect when a photon hits a sensor and measure how much time it took for the photon to travel between the object that emitted it and the camera, and therefore calculate that distance.

Charbon explained, "That time is called the time-of-flight. The ability to calculate it, and to capture a million pixels simultaneously, is what lets the camera generate 3D images very quickly."

Research team designed the first 1 Mpixel camera based on the SPAD pixel. For the pixel they demonstrated two designs, one is 7T (7 transistors per pixel) and another is 5.75T (5.75 transistors per pixel on average). Both the pixels use dynamic memory to store single-photon events generated by the SPAD. For the reduction of power consumption, they employed the system with the feedback mechanism that almost immediately quenches the avalanche of electrons triggered by photon detection. The greater advantage of this feedback mechanism can be seen in very large arrays.

For packing the SPAD sensors, they used the enhanced layout techniques and this also helped them to increase the detection area density which ultimately enables the camera with a million pixels. With the help of sophisticated integrated circuit design techniques, they were able to create an extremely uniform distribution of fast electrical signals over the large-scale pixel array.

Kazuhiro Morimoto, first author of Canon Inc. in Japan said, "For transportation applications, this new camera could help achieve unprecedented levels of autonomy and safety by enabling multiple low-power LiDAR devices to be used on a vehicle, providing fast, high-resolution 3D view of the surroundings." Morimoto added, "In a somewhat more distant future, quantum communication, sensing, and computing could all benefit from photon-counting cameras with multi-megapixel resolution."

Researchers demonstrated that the shutter speeds varied by only 3 percent over the million pixels and make it possible for sensors to be made using available mass-production techniques.

For the newly designed sensor system to measure the time a photon hits the sensor very precisely, its speed is all responsible for it.

The researchers used the new camera sensor to determine the time-of-flight of photons emitted from a laser source and reflected by a target. They also captured complex scenes that are difficult for other imaging techniques to measure, such as an object viewed through a partially transparent window, and they used the camera to acquire conventional pictures with unprecedented dynamic ranges. In future, they plan to further improve the performance and timing resolution of the camera and to further miniaturize the components to make it more practical for a variety of applications.

The team successfully presented a 1 Mpixel time-gated SPAD image sensor for the first time and the sensor was applied to high dynamic range 2D imaging and high spatiotemporal resolution 3D imaging. They claimed that the array size of the newly designed sensor is the largest but the pixel pitch is one of the smallest.