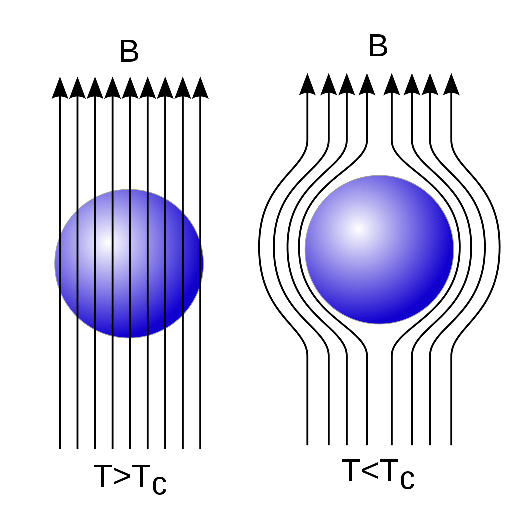 Diagram of the Meissner effect. Magnetic field lines, represented as arrows, are excluded from a superconductor when it is below its critical temperature. Image credit: Wikimedia Commons

From its discovery by a Dutch physicist Heike Kamerlingh Onnes on April 8, 1911, in Leiden, the subject of superconductivity has always been a more intriguing area in physics and material science. An act of charge moving through a material without resistance is called the superconductivity and this allows electrical energy to be transferred between two points with perfect efficiency, losing nothing to heat and the materials are called superconductors. One magical phenomenon of a superconductor is the Meissner effect. Meissner effect is the expulsion of a magnetic field form a superconductor/material when the materials are on their transition to the superconducting state by the cooling of material below the critical temperature.

Most superconducting materials only have their useful function at temperatures of just above absolute zero, where atoms barely move.

In short, the transition from normal material to a superconductor happens abruptly, at a very low temperature. It is claimed that this process of superconductivity might also be associated with Bose-Einstein Condensation, another weird anomalous phenomenon, that arises at extremely low temperatures.

Research describing the novel approach for obtaining the room temperature superconductivity was published on arXiv.org.

Though there may remain places to make it more advance and more efficient, this preliminary approach is considered as a breakthrough in the field of room-temperature superconductivity of materials. This is how they have achieved it.

"Instead of increasing the critical temperature (Tc) of a superconductor, the temperature of the room was decreased to an appropriate Tc value. We consider this approach more promising for obtaining a large number of materials possessing Room Temperature Superconductivity in the near future," they wrote on the abstract.

The team proposed an alternative approach where Room Temperature Superconductivity (RTS) was achieved by reducing the temperature of the room. They used a single-crystalline pellet of Yttrium (an element of atomic number 39) Barium Copper Oxide (YBCO), which is a type II superconductor with a relatively high Tc of about 92 K. The approach encompassed by the team allows them for a clear demonstration of the Meissner effect via a magnetic levitation and flux pinning.

The schematic setup used by the team is shown below.

During the process, the team established a model room where they attached YBCO by a thermal grease to the ceiling of the model room. Then A strong permanent magnet (N45 grade, diameter 12 mm, thickness 3 mm, the magnetic field B ≈ 0.3 T on the surface) was placed in proximity of the YBCO. This will mainly help them to achieve field cooling. The model room was evacuated down to ≈ 10-3 mbar using a rotary pump, then the room was cooled by the cryocooler down to base temperature, T = 80 K (at 180 K we disconnected the rotary pump as we found that cryo pumping becomes more efficient than the pump).

Researchers from the team claimed this approach is outstandingly fast for the development of the new Room Temperature Superconductivity based on the standard YBCO single crystalline material. In the future, the team plans to extend the range of Room Temperature Superconductors to other materials like Sn3Nb, Pb, Hg, etc. by purchasing a more powerful cryocooler with lower base temperature.