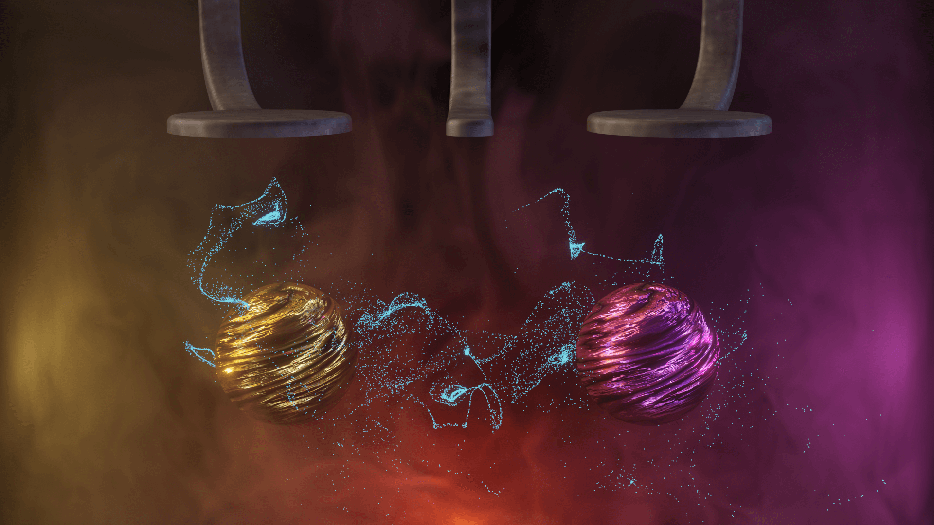 Artistic representation of quantum entanglement between two 'hot' qubits. The three electrodes at the top of the figure are made using standard techniques. Enabling qubits to operate at practical temperatures is a major step towards scalable quantum technology. Image Credit: QuTech

Through the first concepts introduced by Richard Feynman and Yuri Manin in the 1980s, the quantum computer has been esteemed as the future of computing and the future of technology. Though it holds up an immense calculation power, engineering a quantum computer that can operate under normal useable conditions is no an easy task.

Also, the power of a quantum computer will be constrained by the involved cooling process or simply by the coldness at which it is operating. This is because at the extreme cold temperature the electronic components that are required to control the qubits do not work and extreme cold will add additional complications to the system. So, the electronics at the quantum computer needs to be kept in a warmer location and connected to the quantum chip with the wiring. But this wiring would become unreasonably complex as quantum computers scale up at a warmer temperature. Hence, for the Veldhorst team, the challenge was to find a temperature at which both the qubits and the electronics can function.

Researchers led by Menno Veldhorst at QuTech, a collaboration between TU Delft and TNO, and researchers led by Professor Andrew Dzurak from the University of New South Wales, Sydney, have concurrently addressed this problem. Both the research findings were published, separately,  in the journal Nature on 15 April 2020.

They both relied on qubits made from silicon. These silicon qubits are considered significantly less well-developed than the superconducting qubits favored by IBM and Google. Veldhorst's team fabricated it with the help of researchers from chipmaker Intel who were co-authors on the Qutech paper. Qubits are the fundamental units of quantum computing and interesting these simultaneously can represent known as a "superposition" of two states that is 1 and 0.

"The other side of the story is to make qubits work at a slightly higher temperature," said Luca Petit, first author and PhD student in the group of Veldhorst. Petit added, "That's exactly what we have achieved at QuTech in collaboration with Intel. This is the first time that we have been able to control qubits in silicon at a higher temperature, and above one Kelvin. The increase in temperature may seem like a small step, but it's a huge leap when it comes to the available cooling capacity. Furthermore, at these temperatures, the qubits no longer have to work in a vacuum, but can be immersed in a liquid, which makes everything much more practical."

Veldhorst team’s used that standard production technology and the same silicon as in standard electronic equipment. Gertjan Eenink, second author of the publication said, "In order to work at a higher temperature, we had to make improvements at all stages of the experiment. We have created silicon qubits that can be isolated from unwanted interactions."

Menno Veldhorst's team showed that silicon quantum dots, they designed can have sufficient thermal robustness to enable the execution of a universal gate set at temperatures greater than one kelvin and claimed that this paves the way for quantum integrated circuits that host both the quantum hardware and its control circuitry on the same chip, providing a scalable approach towards practical quantum information processing.

Principal researcher Menno Veldhorst said, "This is the first time we can present qubits that are hot, dense, and coherent." Veldhorst added, "We are talking about qubits that are compact, and which function with high quality at a relatively high temperature - something that is particularly crucial for practical applications. Quantum information stored in such qubits is normally quickly lost unless the qubits are cooled down to near absolute zero (-273 degrees Celsius, or 0 Kelvin). Qubits, therefore, function in special 'refrigerators', but they are still controlled by conventional electronics operating at room temperature, which is a major obstacle to progress.'

Similarly, in a published paper, Dzurak’s team demonstrated the operation of a scalable silicon quantum processor at about 1.5 kelvin. The silicon quantum processor units cell comprised of two qubits confined to quantum dots. They first isolate the quantum dots from the electron reservoir, and then initialized and read the qubits solely via tunneling of electrons between the two quantum dots. Their work indicates that a spin-based quantum computer could be operated at increased temperatures in a simple pumped He system, thus potentially enabling the integration of classical control electronics with the qubit array. He system provides cooling power orders of magnitude higher than that of dilution refrigerators.

Researchers from Andrew Dzurak’s team claimed that the chip worked at 1.5 Kelvin which is comparatively 15 times warmer than the main competing chip-based technology being developed by Google, IBM, and others, which uses superconducting qubits. Dzurak explained, "This is still very cold, but is a temperature that can be achieved using just a few thousand dollars' worths of refrigeration, rather than the millions of dollars needed to cool chips to 0.1 Kelvin." Professor Dzurak added, "Our new results open a path from experimental devices to affordable quantum computers for real-world business and government applications."

Dzurak’s team claimed the system designed by them is cheaper and easier to integrate. The chip simply comprises two qubits confined in a pair of quantum dots embedded in silicon and this can be manufactured using existing silicon chip factories and would operate without the need for multi-million-dollar cooling. Also, they claimed that it would also be easier to integrate with conventional silicon chips, which will be needed to control the quantum processor.