Sensor Consisting of Only 11 Atoms 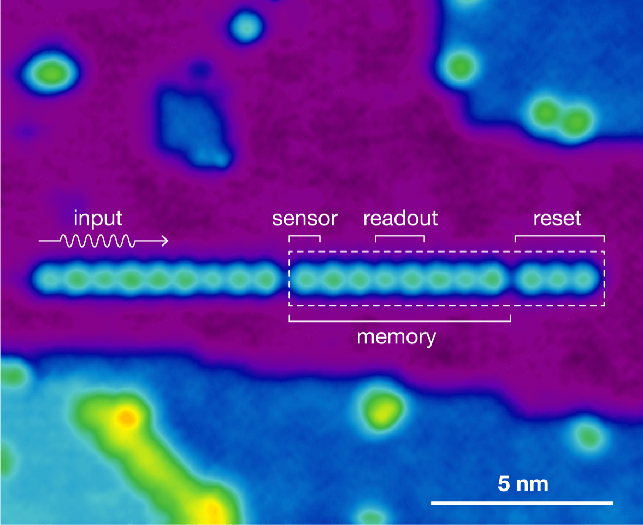 A team of researchers from Delft University of Technology (TU Delft) has successfully developed a sensor that is only 11 atoms in size. The designed 11-atom sensor contains a minuscule device with an antenna, a reset button, a hard disk, a reading screen, and is capable to capture the magnetic waves.

The research work was published in Communication Physics, on 25 May 2020.

Due to a special property- long distance coherence, magnons which are simply known as spin waves are considered a promising candidate for spintronic devices or spin electronics.

Spintronics serves as a new way to manipulate the magnetization of magnetic nanostructures by a spin-polarized current. Spintronics takes advantage of the spin character to create new functionalities and new devices. Instead of using electrical signals, this technology makes use of magnetic signals to transmit data but there remains a problem as it is much difficult to predict their exact behavior. These devices comprise magnetic layers that serve as spin polarizers or analyzers separated by non-magnetic layers through which the spin-polarized electrons are transmitted.

Though spintronics technology simply uses magnetic signals to transmit data, at the tiny scale of our computer chips magnetism phenomenon tends to get incredibly complicated. The main problem with this technique is that the waves propagate extremely fast and cause to vanish in mere nanoseconds and they travel in multiple directions at the same time.

Atom manipulation technique based on scanning tunneling microscopy (STM) seems more useful as this has enabled studies of collective magnetism ranging from the emergence of magnetic bistability to spin waves, phase transitions, and topologically protected edge states. However, by nature of the STM design, in each of these studies, the effect of local tip-induced stimuli can only be probed there where they are generated.

Researchers from TU Delft presented a device, based on Fe atoms, that provides memory-based remote detection of spin dynamics in atomic spin structures.

They used a UNISOKU USM-1300s 3He STM system that operates at 1.5 K and magnetic field strength at 0.5–1 T in the plane of the sample, along the axis of the structures.

The structure consists of three parts: an input lead, an output lead, and a reset lead.

This design is based on Fe atoms on top of Cu2N (Molecular weight: 141.099). All structures are built in a line along a nitrogen row of the Cu2N molecular network which coincides with the easy axis of the Fe atom spins.

They applied a magnetic field B = 0.5 to 1.0 T along the direction of the easy axis of the Fe atom spins.

The central idea of this invention is that the device instantly detects a passing magnetic wave and remembers this information.

Researchers connected the device to a very short magnetic atomic wires through which magnetic waves were transmitting. The waves moved very peculiarly, as one would expect from quantum mechanics.

First, the output lead is set to NA. If this is not the case, the output can be initialized by starting the cycle at step 3. In the second cycle, a spin excitation will be induced in the input lead, and that affects the spin state of atom A. Here, the resulting energy splitting between NA and NB causes the system to fall to its ground state NB. In the third, the output lead, consulted by the STM tip, retains its state NB after the input lead relaxes to its original state. Further actuation on the input lead does not change the output state. Now in the fourth cycle, a reset is performed by means of a similar excitation on the reset lead, after which the fifth cycle of the system returns to its initial state NA.

In the experiments, the team always starts with the tip on the input lead. They then defined PH as the measured probability for the output lead to switching from NA to NB, and PU the probability to switch from NB to NA.

Research leader Sander Otte explained, "Compare it to a mousetrap. A mouse is typically too fast and too small to capture by hand. But a mousetrap reacts very quickly and then hold the mouse in place."

Now the next step is to apply this technique to a more complicated circuits and gain more insight into the behavior of spintronics.