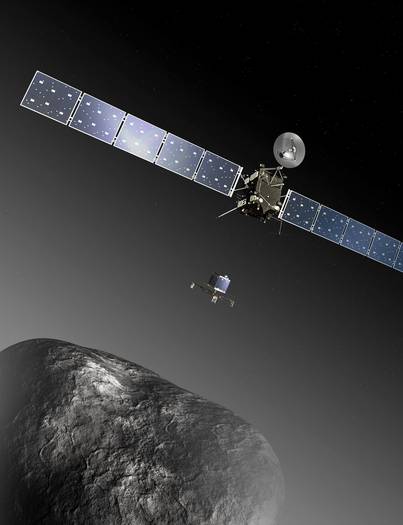 An artist’s illustration of the spacecraft Rosetta and the Philae lander at comet 67P C-G. Image © By European Space Agency – Rosetta and Philae at comet, CC BY-SA 3.0-igo,

Exploring comets for different minerals certainly will serve us to explore the vast and extended space. This may also come up with a more exact answer to the extraterrestrial life.

Did comets deliver the elements essential for biological life on Earth? have long been a topic of interest among astronomers. But it’s looking more and more like they could have, at least one comet might have, study shows.

In a study reported in the Monthly Notices of Royal Astronomical Society states that they have detected phosphorus-containing minerals- a biological life critical element, in solid particles collected from the inner coma of comet 67P/Churyumov–Gerasimenko, in short (67P/C-G). It was measured using an instrument called COmetary Secondary Ion Mass Analyser (COSIMA) that is on-board in the Rosetta spacecraft since 2004.

COSIMA is a Time-of-Flight Secondary Ion Mass Spectrometer (TOF-SIMS) that uses a pulsed ion beam to remove molecules from the very outermost surface of the sample. By this method, the particles are removed from atomic monolayers on the surface (secondary ions) and then are accelerated into a flight tube and their mass is determined by measuring the exact time at which they reach the detector i.e. time-of-flight.

Almost 30 years ago, a team of researchers reported the first detection of phosphorus in a comet. The sample was collected during a flyby of Comet 1P/Halley by the Vega 1 mission in 1986. But during that detection, there were some limitations like an assumption that no molecule could have survived the impact during dust capture at a velocity of >70 km s−1 and it is still unknown in what kind of parent mineral this phosphorus was contained. Similar second detection of phosphorus has been reported in dust particles collected by the NASA Stardust spacecraft during the flyby of comet 81P/Wild in 2004 and returned to Earth in 2006 and there are others.

Project leader Harry Lehto from the Department of Physics and Astronomy at the University of Turku, said: “We have shown that apatite minerals are not the source of phosphorus, which implies that the discovered phosphorus occurs in some more reduced and possibly more soluble form.”

But how is phosphorus important for biological life? In the process of forming life, water-soluble reactive phosphorus compounds were required to convert nucleotide precursors by phosphorylation to active nucleotides.

In a press release accompanying the research, they state that “This is the first time that life-necessary CHNOPS elements are found in solid cometary matter.” The new finding is important to the understanding of how life came to be on Earth. Phosphorus is critical to life on Earth, but if it’s locked into an apatite mineral, it’s largely out of reach. If it’s in its gaseous form, it’s also unsuitable. But the newly-discovered phosphorus is more available. Author writes in their paper, “In the process of forming life, water-soluble reactive phosphorus compounds were required to convert nucleotide precursors by phosphorylation to active nucleotides.”

However a long-awaited puzzle has been solved, there’s still a problem with the comet delivery idea; if the impact is too energetic, materials can be destroyed or altered. The team also have the answer to his problem and they think it is conceivable that early cometary impacts onto the planet surface have been less energetic, as compared to the impacts of the heavy stony meteorites, thus preserving the prebiotic molecules in a more intact condition.

Though the solubility of the detected cometary phosphorus from 67P/C-G is not clear, preliminary research showed that those compounds must be soluble and they can’t be locked into minerals.

Further, for completely advancing the comet CHNOPS delivery idea, a comet sample-return mission is necessary. In the published paper the author writes, “The presence of all the CHNOPS-elements gives a strong premise for a future cometary sample-return mission to a comet. This could confirm the presence of all compounds and their possible mineral sources and the possible solubility of the matter. This would also allow for a comprehensive analysis of the relative amounts of these CHNOPS-elements.”

For sure, the research work paves a supreme step and has important limitations because they were collected in modest numbers at harsh hypervelocities and represent a one-time random sampling of the coma (a “grab” sample).

The team also wrote about the solution to this limitation and explained what an improved comet sample-return mission would look like. “This mission utilizes a spacecraft designed to rendezvous with a comet, make extended observations within the cometary coma (but not land on the comet), gently collect multiple coma samples representing different source sites, and return them to Earth for study.”

New Research: The Detection of Solid Phosphorus and Fluorine in the Dust from the Coma of Comet 67P/Churyumov-Gerasimenko