Speed of Light; A Universal Constant but is Affected by Curvature of Space-Time 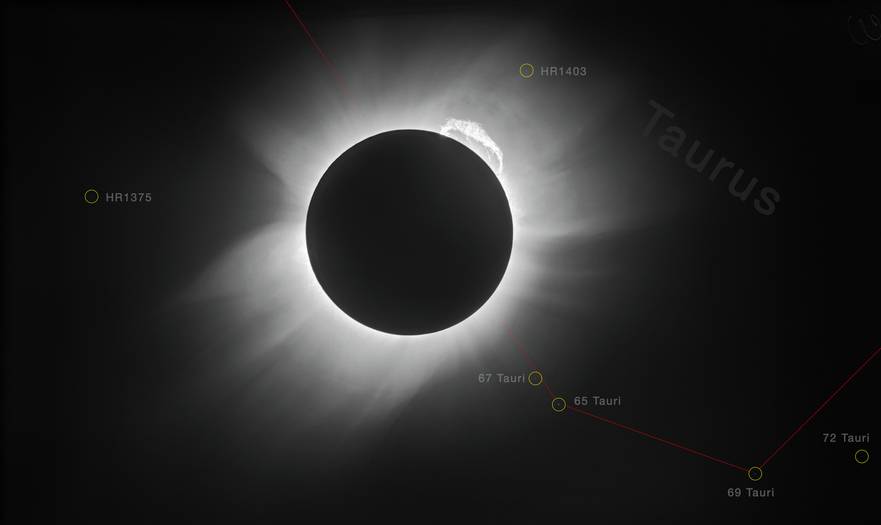 This image is the highest resolution image of the 1919 eclipse. The image is the result of applying modern image processing techniques — including image restoration, noise reduction, and removal of artifacts — to that plate copy (the un-annotated version here). Image credit: ESO/Landessternwarte Heidelberg-Königstuhl/F. W. Dyson, A. S. Eddington, & C. Davidson

Ole Romer first introduced the concept of the speed of light. He observed the eclipse time of one of Jupiter’s moon, ‘Io’ for almost a year and he encountered a strange phenomenon of that eclipse and calculated the speed of to be about 220,000,000 m/second.

New concepts on topic - gravity, came into the main role from the time of Einstein’s General Theory of Relativity. Until then, the concept of gravity enlightened by Newton was on the main play which state gravity as a force that pulls things toward an object, and the more massive the object, the stronger the pull.

The concept of bending of light by gravity was introduced earlier by Newton.

According to Newton, if a ray of light from a distant star passes by the edge of a massive object, the ray should be bent by the gravity of that object. Newton's principle says the Sun's gravity will bend a light ray from a distant star, though in small amount, and the change in position can be measured by taking photographs of the star when its light is passing close to the Sun and later in the year when its light is not passing close to the Sun.

But later Einstein's theory predicts that the curvature of space caused by the Sun's mass should bend starlight twice as much as Newton's principles predict it should.

In his General Theory of Relativity, Albert Einstein proposed that matter causes spacetime to curve. Also from that theory, Einstein postulated that light particles are affected by the curvature of space-time. This implies that the light of distant stars travels through the curved geometry of space before it reaches Earth and is supported by observation during the total eclipse of the sun on May 29, 1919, and for this observation, a separate team was lead by Sir Arthur Stanley Eddington and Andrew Crommelin. Eddington led a group to the island of Principe near the western coast of Africa and Another team led by Dr. Andrew Crommelin from the Royal Observatory, traveled to northern Brazil to view the eclipse.

According to Sir Joseph Thompson, "the greatest achievement in the history of human thought" was a prediction made by Albert Einstein. Einstein's prediction was proven true during the total eclipse of the sun on May 29, 1919.

The Royal Observatory party went to Brazil in time to prepare for the eclipse and luckily that day turned to be a cloud cleared day. Though the observations were carried out with almost complete success, the observers remained in Brazil until July so they could photograph the same set of stars during the night sky when their light did not pass by the Sun. Between May and July, the Earth had moved in its orbit, which changed the position of these stars compared to the positions of the Earth and Sun.

Similarly, luckily the team on the Principe were also able to see the eclipse and they took 16 photographs in total exactly as arranged. Among those 16 but only two plates taken showed enough stars to measure.

The Royal Observatory party arrived in Brazil in time to prepare for the eclipse and to photograph other star fields. It was cloudy early on the day of the eclipse but cleared later, and the observations were carried out with almost complete success. The observers remained in Brazil until July so they could photograph the same set of stars during the night sky when their light did not pass by the Sun. Between May and July, the Earth had moved in its orbit, which changed the position of these stars compared to the positions of the Earth and Sun. Waiting for the Earth to move in its orbit positioned these stars in the night sky once again. Once this second set of photographs was obtained, the observers immediately returned to Greenwich where each plate was carefully measured two times.

The team observed that the Sun's gravity did deflect the light. He also stated that the amount of deflection was very close to what Dr. Einstein predicted and almost twice as much as Newton's principles predicted.

When lights from distant galaxies passes by massive objects in the universe, the gravitational pull from these objects can distort or bend the light. This is called gravitational lensing.

This basically means that for a star passing close to Sun, it is deflected by the Sun's gravitational field, i.e. due to the wrapping of space that arises from the mass of Sun. This deflection causes the light from that star displaced slightly. Then the star appears to be farther from the Sun than it should be. This displacement can be measured by using the technique of photographing the apparent position of stars during a solar eclipse and comparing these positions with those observed in the night sometime later. This way of light particles affected by the gravitational force was first put forward, which is mathematically correct, by Albert Einstein through his General Theory of Relativity which implies that Gravitation is not a force, but a property of spacetime.