To Find the Value of Acceleration Due to Gravity (g), Radius of Gyration (K), and Moment of Inertia (I) by using Compound Pendulum 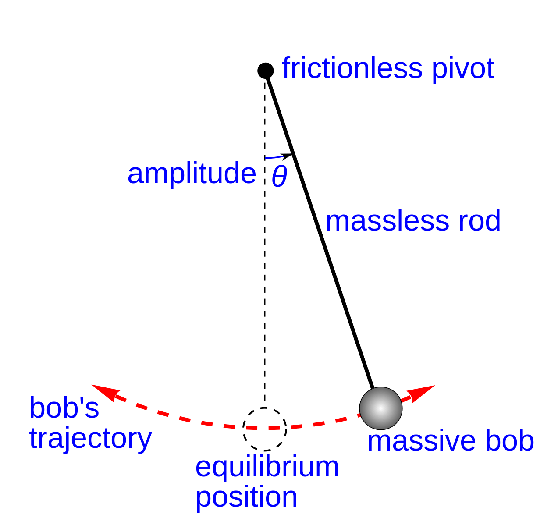 Diagram of simple gravity pendulum, an ideal model of a pendulum. It consists of a massive bob suspended by a weightless rod from a frictionless pivot, without air friction. When given an initial impulse, it oscillates at constant amplitude, forever. Image © Wikimedia Commons

There exist different kinds of pendulums like simple, compound, double, and Kater’s pendulum. Typically a simple pendulum consists of a small body called a “bob” (usually a sphere) attached to the end of a string of certain the length whose mass is negligible in comparison with that of the bob. But this simple pendulum is a more ideal kind of pendulum and can not be realized in actual practice. Most of the hard to achieve defects are removed by introducing the concepts of compound pendulum.

Any swinging rigid body free to rotate about a fixed horizontal axis is called a compound pendulum or physical pendulum.

A compound pendulum consists of a rigid body that can oscillate freely about a horizontal axis passing through it.

The appropriate equivalent length L for calculating the period of any such pendulum is the distance from the pivot to the centre of oscillation.

Figure below shows a compound pendulum where a body of mass M is pivoted about a horizontal frictionless axis through A and G' is the point after displaced from its equilibrium position by an angle θ. The distance between G’ and A is 𝑙.

Now the restoring torque for an angular displacement θ is,

This restoring torque gives rise to an angular acceleration in the pendulum which mathematically means,

where 𝘐  is the moment of inertia of the body through the axis A.

where 𝘐 is the moment of inertia of the body through the axis A.

So we may get,

As the angular acceleration is proportional to angular displacement, the motion of the compound pendulum is simple harmonic and its time period 𝑇 is given by

If IG is the moment of inertia of the body about an axis parallel with the axis of oscillation and passing through the centre of gravity G.

And 𝘐G = mK2 where K is the radius of gyration.

And length of an equivalent simple pendulum is

is called the length of an equivalent simple pendulum or reduced length of the pendulum.

K2 is always a positive quantity and the length of an equivalent simple pendulum is always greater than 𝑙.

Since equation (A) have two roots, 𝑙1 and 𝑙2, and equation (C) is quadratic in 𝑙 we can get

By determining L, 𝑙1, and 𝑙2 graphically for a particular value of time period (T), the acceleration due to gravity g at that place and the radius of gyration K of the compound pendulum can be determined.

The bar pendulum (compound) consists of a metallic bar of about one meter long. A series of circular holes each of approximately 5 mm in diameter are made along the length of the bar. The bar is suspended from a horizontal knife-edge passing through any of the holes. The knife-edge, in turn, is fixed in a platform provided with the screws. By adjusting the rear screw the platform can be made horizontal.

To plot the graph,

To find the value of acceleration due to gravity “g”;

Similarly, measure the distances between A’D’ and B’E’ and so on.

Now use the value in the equation

To find the radius of gyration (K);

Moment of inertia (I);

Find the mass of the pendulum.

And now the moment of inertia  = MK2