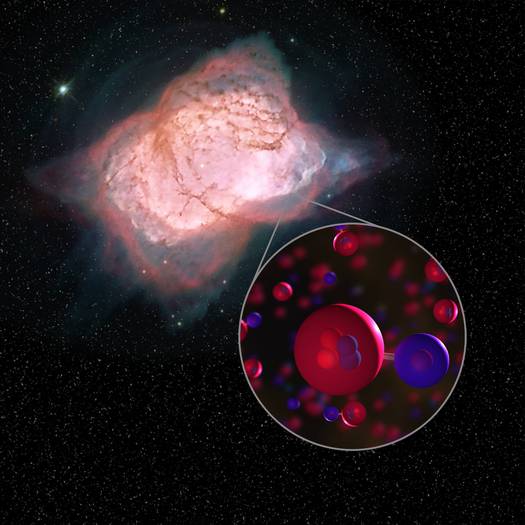 Scientists believe that the universe came into existence through a process called Big Bang. Even after hundreds of thousands of years of the Big Bang, the universe was too hot and too full of radiation for atoms to bond together and it took 13.8 billion years for the universe to be at the current stage that contains planets, stars, and galaxies. Gradually, the temperature decreases by cosmic inflation and became suitable to form particles like electrons, protons, atoms, and molecules.

Accordingly,  scientists believe that around 100,000 years after the big bang, Helium, and Hydrogen combined to make a molecule called Helium hydride. Helium hydride is a charged molecule, each made of a neutral Helium atom and a positively charged hydrogen atom.

For the first time, scientists using the world's largest airborne observatory, NASA's Stratospheric Observatory for Infrared Astronomy, or SOFIA, detected the first type of molecule, the Helium hydride, that ever formed in the universe.

Also Read: Weird Molecule 'Cyclopropenylidene (C3H2)' Found on the Atmosphere of Saturn’s Moon - Titan And No One Knows How

SOFIA is the flying observatory designed through a partnership between NASA and the German Aerospace Center (DLR) to observe the infrared universe. It is Boeing 747SP aircraft modified to carry a 2.7-meter (106-inch) reflecting telescope (with an effective diameter of 2.5 meters or 100 inches) and it flies into the stratosphere at 38,000-45,000 feet. Stratosphere block above 99 percent of Earth’s infrared and so SOFIA at that level will allow astronomers to study the solar system and beyond in ways that are not possible with ground-based telescopes.

Even hundreds of thousands of years after the Big Bang, only a few types of atoms existed, including Hydrogen, Helium, and Lithium. Of these three, Helium is the first noble gas - the first atom with enough electrons to completely fill the available slots in its electron shell and was the first to begin forming real atoms.

With their higher ionization potentials, the Helium ions He2+ and He+ were the first to combine with free electrons, forming the first neutral atoms; the recombination of hydrogen followed.

In the early universe, others except hydrogen, Helium, and Lithium are largely composed of protons and without an electron. Then they began slowing down and looking for oppositely charged partners, electrons, to make them electrically neutral but catching free electrons for themselves was difficult. Now Helium is attracted to hydrogen nuclei and the collisional pressure eventually led a few Helium atoms to share their electrons with protons forming the first chemical bond. The new compound of Helium and hydrogen was called Helium hydride (HeH+), the very first molecule (of any sustained abundance) in the universe.

Rolf Guesten of the Max Planck Institute for Radio Astronomy, in Bonn, Germany, and lead author of the paper said, "The lack of evidence of the very existence of Helium hydride in interstellar space was a dilemma for astronomy for decades."

After decades of searching, SOFIA found modern Helium hydride in a planetary nebula, called NGC 7027, which is located 3,000 light-years away near the constellation Cygnus. This discovery serves as proof that Helium hydride can, in fact, exist in space and confirms a key part of our basic understanding of the chemistry of the early universe. This also made insight into how the chemistry evolved over billions of years and we get the complex chemistry of today.

Harold Yorke, director of the SOFIA Science Center, in California's Silicon Valley said, "This molecule was lurking out there, but we needed the right instruments making observations in the right position - and SOFIA was able to do that perfectly."

The planetary nebula NGC 7027 was observed during three flights between 14 and 25 May 2016. The shell of NGC 7027 was blown off a sunlike star when its core collapsed into a white dwarf about 600 years ago and in the light emitted by the hot, dense cloud of gas, researchers detected Helium hydride's signature wavelength of infrared radiation.

Scientists believe the ultraviolet radiation and heat from the aging star create conditions suitable for Helium hydride to form and they thought the planetary nebula, NGC 7027, has the environment that might be just right to form Helium hydride. But Helium hydride is itself a fussy molecule as itself is a noble gas making it very unlikely to combine with any other kind of atom and their observations were inconclusive. Scientists were only able to create the molecule in a laboratory.

Despite the subsequent efforts hinted it could be there, the molecule's mysterious nature continued to hinder the detection. Also, the space telescopes used did not have the specific technology to pick out the signal of Helium hydride from the medley of other molecules in the nebula and so we were unable to detect Helium hydride in space.

Initially, SOFIA also was not equipped with the Helium hydride detection technology. But a recent upgrade to one of SOFIA's instruments called the German Receiver at Terahertz Frequencies, or GREAT added the specific channel for Helium hydride.

The newly equipped SOFIA works like a radio receiver. Scientists all have to do is tune to the frequency of the molecule they are searching for as similar to tuning an FM radio to the right station. By this same process, the recent and the first Helium hydride's signal came through.

When SOFIA took its flight to the night sky, the concerned scientist also onboard reading the data from the instrument and they get real-time data.

Guesten said, "It was so exciting to be there, seeing Helium hydride for the first time in the data. This brings a long search to a happy ending and eliminates doubts about our understanding of the underlying chemistry of the early universe."

Although it seems that the Helium hydride ions detected in NGC 7027 were created in the planetary nebula rather than being leftover from the early universe, their existence and detection confirm that Helium hydride ions can exist outside the lab. This observation matches the theoretical simulations of the primordial cosmos and strongly suggests the theoretical models aren't in serious need of revision.