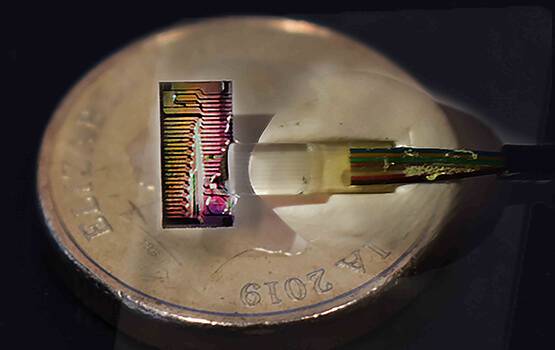 The internet that you are using right now came crossing hundred of thousands of kilometer of distance through an optical fibre network system that carries gigabits of data per second. A typical single Mode Fiber can transmit the data at the rate of 100 Mbit/s or Gbit/s, the transmission distance can reach up to 5 km and the multimode fiber optic can transmit data at the rate of 100 Mbit/s for distance up to 2 km Gbit/s up to 1000m, and 10 Gbit/s up to 550 m.

The capacity of an optical fibre system is growing at a rate of 25% per year. The working of the optical fibre system basically depends on the principle of the laser system and many internet distributors, engineers, and researchers are worried that the current systems will struggle in the years to come.

But now the trend of internet using capacity is being shifted from long-haul (spanning 1000's km) to metro-area networks (linking across 10's–100's km) and even data centres (< 10 km) and for this, we need to have low-cost and energy-efficient solutions, with photonic integrated circuits emerging as the most viable approach. For this vital role, a compact integrated chip with the ability to supply all wavelengths will replace many parallel lasers and, for sure, will offer the greatest benefits in the field of data transport and internet and, from experiments, micro-combs - optical frequency combs based on microcavity resonators - have shown significant promise in fulfilling this role.

Micro-combs have enabled breakthroughs in many fields randing from spectroscopy to quantum sources to metrology and ultrahigh capacity data transmission. This also helped us in the fields like microwave photonics, frequency synthesis, and optical ranging.

A team of researchers from Monash, Swinburne, and Royal Melbourne Institute of Technology (RMIT) universities used the same micro-combs technique to achieve the world's fastest internet speed and they successfully achieved it. The team recorded the internet speed of 44.2 Terabits per second.

By this speed you can download 1,000 HD movies in a split second. It's just wow!

A research paper describing their work was published in the journal Nature Communications on May 22, 2020.

Dr. Bill Corcoran, co-lead author of the study and Lecturer in Electrical and Computer Systems Engineering at Monash University said, "We're currently getting a sneak-peak of how the infrastructure for the internet will hold up in two to three years' time, due to the unprecedented number of people using the internet for remote work, socialising and streaming. It's really showing us that we need to be able to scale the capacity of our internet connections."

For the real testing experience researchers used the existing communications infrastructure from which they were able to efficiently load-test the network.

The used micro-comb chips are not completely a new technique and this device has been developed about a decade ago. As our data highways are being more-and-more complex, the old technology is now seen as a promising way to meet the requirements that could slim down and speed up the technology behind our internet usages.

This research demonstrated the ability of fibres that are already laid in the ground and also have developed something that is scalable to meet future needs.

The team conducted two transmission experiments. They also demonstrated a field trial across 76.6km of 'dark' optical fibres - installed fibre network that connects the Melbourne City campus of RMIT and the Clayton campus of Monash University. At the receiver's end, the signal was recovered using a common offline digital signal processing (DSP) flow.

The optical fibres were provided by Australia's Academic Research Network.

Professor David Moss, Director of the Optical Sciences Centre at Swinburne University, said, "In the 10 years since I co-invented micro-comb chips, they have become an enormously important field of research. Moss added, "It is truly exciting to see their capability in ultra-high bandwidth fibre optic telecommunications coming to fruition. This work represents a world-record for bandwidth down a single optical fibre from a single chip source, and represents an enormous breakthrough for part of the network which does the heaviest lifting. Micro-combs offer enormous promise for us to meet the world's insatiable demand for bandwidth."

The micro-comb used in the study was generated from the doped silica double-bus micro-ring resonator. The micro-ring resonators (MRR) for comb generation were fabricated using CMOS-compatible processes with doped silica glass waveguides and it has a cross-section of 3 × 2 μm and a radius of ~592 μm. The MRR chip was then mounted on a Peltier cooler that transfers heat from one side of the device to the other, with consumption of electrical energy, depending on the direction of the current, monitored by a standard negative temperature coefficient or NTC temperature sensor. The temperature was maintained with a thermo-electric cooler (TCM-M207) at 25˚C, within 0.1˚C of accuracy and the laser was set to standard running mode.

The micro-comb was contributed by Swinburne University. The team placed the micro-comb within the designed transmission fibres and that acts like a rainbow made up of hundreds of high-quality infrared lasers. Here, each 'laser' has the capacity to be used as a separate communications channel.

Bill Corcoran said, "And it's not just Netflix we’re talking about here - it’s the broader scale of what we use our communication networks for. This data can be used for self-driving cars and future transportation and it can help the medicine, education, finance, and e-commerce industries, as well as enable us to read with our grandchildren from kilometres away."

By using a new chip known as micro-comb researchers were able to replace 80 laser systems and what more surprising is that the new chip is smaller and lighter than existing telecommunications hardware.

Researchers claimed that this technology has the capacity not only to support the high-speed internet connections of 1.8 million households in Melbourne, Australia but at the same time billions across the world during peak periods.

Professor Mitchell of RMIT and an involved researcher said, "Long-term, we hope to create integrated photonic chips that could enable this sort of data rate to be achieved across existing optical fibre links with minimal cost."

Though much research work needs to be done to be able to fully use the new chip, this work is, of course, a milestone in the data transmission, basically for the internet. If, in future, all goes well we might all say goodbye to transmitters, and data centers will be using these chips making us able to use the internet at the speed of terabits and with much fewer data and energy loss.