Nanosensor Knows When Plants Are Stressed 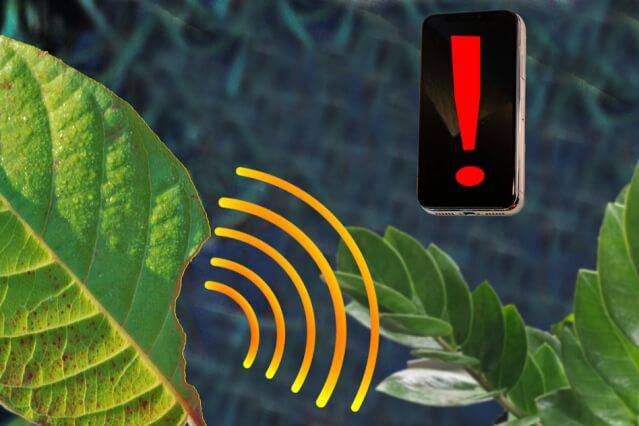 MIT chemical engineers have designed a sensor that can be embedded into plant leaves and measure hydrogen peroxide levels, which indicate that damage has occurred. The signal can be sent to a nearby smartphone. Image credit: Felice FrankelCaption

Unlike animals, plants do not possess specialized mobile immune cells for defense. Instead, they rely on rapid cell-to-cell communication using mobile signals to trigger both local and systemic responses upon threat perception. Hence, decoding wound signalling in plants is critical for understanding various aspects of plant sciences (like pest resistance to secondary metabolite and phytohormone biosynthesis). Obviously, investigating this mysterious phenomenon is a hard job but now this complexity has been solved by a team of researchers at the Massachusetts Institute of Technology (MIT).

MIT engineers have developed a technique and were able to closely track how plants respond to stresses such as injury, infection, and light damage using sensors made of carbon nanotubes. For this, they implanted nanosensors in plant leaves and those nanosensors report on hydrogen peroxide (H2O2) levels.

Michael Strano, the Carbon P. Dubbs Professor of Chemical Engineering at MIT said, "Plants have a very sophisticated form of internal communication, which we can now observe for the first time. That means that in real-time, we can see a living plant’s response, communicating the specific type of stress that it’s experiencing."

The researchers demonstrated their approach in eight different plant species, including spinach, strawberry plants, and arugula, and they believe the sensor and techniques employed by the team could be used to study how plants respond to different types of stress. This will potentially help agricultural scientists to develop new strategies and improve crop yields.

The study, in which Michael Strano, the Carbon P. Dubbs Professor of Chemical Engineering at MIT, as the senior author, MIT graduate Tedrick Thomas Salim Lew as the lead author of the paper, was reported in the journal Nature Plants on 15 April 2020.

The principle is simple. When an insect or predators attack the plant, they feel stressed and release hydrogen peroxide and this hydrogen peroxide characterize the kind of stress and also a stress-causing agent. Then accordingly we will be able to treat the infected plants.

Over the past several years, Strano’s lab has been exploring the potential for engineering “nano bionic plants” - plants that can incorporate nanomaterials and that give the plants new functions, such as emitting light or detecting water shortages. In the new study, he set out to incorporate sensors that would report back on the plants’ health status.

Previously, Strano had developed carbon nanotube sensors that can detect various molecules, including hydrogen peroxide. And about three years ago, Lew began working on trying to incorporate these sensors into plant leaves. Though not confident, several studies in Arabidopsis thaliana, which is often used for molecular studies of plants, suggested that plants might use hydrogen peroxide as a signaling molecule. Tedrick Thomas Salim Lew was inspired by this and he thought of tracking those hydrogen peroxides by using Strano’s carbon nanotube sensors.

Lew used a method called lipid exchange envelope penetration (LEEP) to incorporate the sensors into plant leaves. LEEP was developed by Strano’s lab several years ago and this allows them for designing nanoparticles that can penetrate plant cell membranes.

As Lew was working on embedding the carbon nanotube sensors, he made a fortuitous discovery. Lew said, "I was training myself to get familiarized with the technique, and in the process of the training, I accidentally inflicted a wound on the plant. Then I saw this evolution of the hydrogen peroxide signal."

During his experiment, Lew observed that after a leaf was injured, hydrogen peroxide was released from the wound site and generated a wave that spread along with the leaf. As a plant cell releases hydrogen peroxide, it triggers calcium to release within adjacent cells, which stimulates those cells to release more hydrogen peroxide. This stream of hydrogen peroxide from plants wound stimulates plant cells to produce molecules called secondary metabolites, such as flavonoids or carotenoids. Metabolites like flavonoids or carotenoids help plants to repair the damage. In addition, some plants also produce other secondary metabolites that can be secreted to fend off predators. Also, these metabolites are often the source of the food flavors that we desire in our edible plants, and they are only produced under stress.

Strano said, "Like dominos successively falling, this makes a wave that can propagate much further than a hydrogen peroxide puff alone would. The wave itself is powered by the cells that receive and propagate it."

Traditionally, plant biologists have done much of their molecular biology research in certain plants that are amenable to genetic manipulation, including Arabidopsis thaliana and tobacco plants, but this new approach developed by researchers from MIT is a more advantageous sensing technique as this is applicable to potentially any plant.

Strano said, "In this study, we were able to quickly compare eight plant species, and you would not be able to do that with the old tools."

The researchers tested plants like strawberry plants, spinach, arugula, lettuce, watercress, and sorrel, and observed that different species appear to produce different waveforms - the distinctive shape produced by mapping the concentration of hydrogen peroxide over time. They hypothesize that each plant’s response is related to its ability to counteract the damage. Each species also appears to respond differently to different types of stress, including mechanical injury, infection, and heat or light damage.

"This waveform holds a lot of information for each species, and even more exciting is that the type of stress on a given plant is encoded in this waveform," Strano said. "You can look at the real-time response that a plant experiences in almost any new environment."

Detecting the hydrogen peroxide by using nanosensors only does not make the study a success. The detected signals are to be converted into readable data. The team claimed that the near-infrared fluorescence produced by the sensors can be imaged using a small infrared camera connected to a Raspberry Pi, a $35 credit-card-sized computer similar to the computer inside a smartphone. Strano said, "Very inexpensive instrumentation can be used to capture the signal."

Applications for this technology include screening different species of plants for their ability to resist mechanical damage, light, heat, and other forms of stress. It could also be used to study how different species respond to pathogens, such as the bacteria that cause citrus greening and the fungus that causes coffee rust.

"One of the things I’m interested in doing is understanding why some types of plants exhibit certain immunity to these pathogens and others don’t," Strano said.

In the future, Strano and his colleagues are planning to study shade avoidance, which is seen in many species of plants when they are grown at high density. Shade avoidance lowers the overall crop yield and agricultural researchers are interested in engineering plants so that they don’t turn on that response. Furthermore, future work could investigate how the wave characteristics of H2O2 signalling vary when plants are subjected to different stresses.

Strano said, "Our sensor allows us to intercept that stress signal and to understand exactly the conditions and the mechanism that are happening upstream and downstream in the plant that gives rise to the shade avoidance."