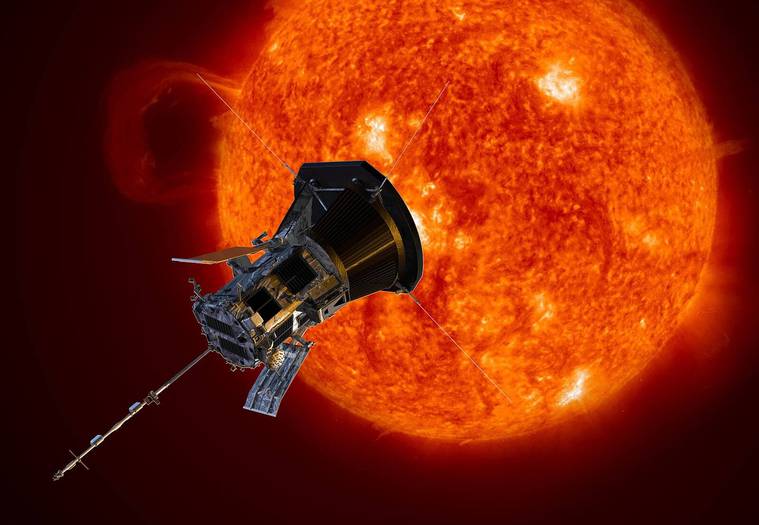 Space of our solar system is constantly filled with the stream of charged particles released from the upper atmosphere of the Sun, called the corona. The charged particles are commonly known as the solar wind and travelling a long distance, these charged particles also hit the Earth's atmosphere. This plasma mostly consists of electrons, protons, and the alpha particles with kinetic energy between 0.5 to 10 KeV. The surface temperature of the Sun is about 5,778 K and the core temperature is predicted to be more than 15 million K. Though the Sun itself is so ridiculously hot, once the solar winds reach Earth, they are hotter than they should be and scientists are worried that this phenomenon defies the laws of physics that the wind should cool down as it expands through space. But it seems we might finally know why we have such a discrepancy of solar winds and the worries are now over.

Physicists from the University of Wisconsin–Madison have finally unravelled the mystery behind the inconsistency of solar wind that is hitting the Earth by publishing their peer-reviewed study "Electron Temperature of the Solar Wind" in the journal Proceedings of the National Academy of Sciences (PNAS).

Stas Boldyrev, professor of physics and lead author of the study said, "People have been studying the solar wind since its discovery in 1959, but there are many important properties of this plasma which are still not well understood." Boldyrev added, "Initially, researchers thought the solar wind has to cool down very rapidly as it expands from the sun, but satellite measurements show that as it reaches the Earth, its temperature is 10 times larger than expected. So, a fundamental question is: Why doesn’t it cool down?"

It is crucial to understand the characteristics of the solar wind and recently this will be probed at distances unprecedentedly close to the Sun by the new Parker Solar Probe mission, named after living Eugene Newman Parker and was launched on August 12, 2018.

Observations demonstrate that as the wind expands with the heliospheric distance, its temperature gradually declines. This is true below the distances of about 10 to 20 astronomical units (AU). At larger distances, the temperature, in fact, increases with the distance due to the heating provided by pickup ions. The solar wind, however, is not cooled down as fast as one would expect based on the adiabatic expansion law. This indicates the presence of significant non-adiabatic heating and this mechanism of solar wind heating puzzled researchers and scientists of space plasma physics. Similarly, another puzzle came by the observational fact that the ion and electron temperatures are different in the solar corona.

The theory proposed by Stas Boldyrev and colleagues revealed the role of the non-Maxwellian electron distribution function in the heating mechanism, and they state that it may be valuable for interpreting the results of in situ satellite measurements. The team proposed that the electron component of the solar wind plasma is heated by electrons streaming from the hot solar corona and slowly losing their energy due to weak Coulomb collisions. They sought the answer in the related field of plasma physics. Their findings suggest ways to study solar wind phenomena in research labs and learn about solar wind properties in other star systems.

As a different approach physicist of the University of Wisconsin–Madison used laboratory equipment to study moving plasma and they were able to discover what keeps the solar wind from cooling down before hitting Earth and they looked to a related, but distinct, the field of plasma physics for a possible explanation. Turns out, the problem lies in a trapped sea of electrons that just can't seem to escape from the Sun's grip.

The Solar plasma is no more than a molten mixture of negatively charged electrons and positively charged ions and because of this charge, solar plasma is influenced by magnetic fields that extend into space, generated underneath the solar surface. As the hot plasma escapes from the sun’s outermost atmosphere, corona, it travels millions of km through space and reaches the Earth: the solar wind. The electrons in the plasma are much lighter particles than the ions, so they move about 40 times faster.

Boldyrev says, "There is a fundamental dynamical phenomenon that says that particles whose velocity is not well aligned with the magnetic field lines are not able to move into a region of a strong magnetic field." Boldyrev added, "Such returning electrons are reflected so that they stream away from the sun, but again they cannot escape because of the attractive electric force of the sun. So, their destiny is to bounce back and forth, creating a large population of so-called trapped electrons."

Boldyrev and his colleagues, UW–Madison physics professors Cary Forest and Jan Egedal developed mirror machines. Also known as magnetic mirrors or magnetic traps, these linear fusion devices are long tubes with a bottle-neck at either end. Now, as charged particles in the plasma travel along the field lines, they reach the bottleneck and the magnetic field lines are pinched. The pinch acts as a mirror, reflecting particles back into the machine.

Boldyrev said, "But some particles can escape, and when they do, they stream along expanding magnetic field lines outside the bottle. Because the physicists want to keep this plasma very hot, they want to figure out how the temperature of the electrons that escape the bottle declines outside this opening." Boldyrev added, "It's very similar to what’s happening in the solar wind that expands away from the sun."

Mirror machines don't actually contain any shiny kind mirrors. Their reflective nature is created as streams of plasma passing through the bottle pinch in at either end, altering the surrounding magnetic fields in such a way that particles within the stream reflect back inside again.

Boldyrev and colleagues thought they could apply the same theory from the mirror machines to the solar wind and they will observe at the differences in the trapped particles and those that escape. In mirror machine studies, the physicists found that the very hot electrons escaping the bottle were able to distribute their heat energy slowly to the trapped electrons.

Boldyrev said, "In the solar wind, the hot electrons stream from the sun to very large distances, losing their energy very slowly and distributing it to the trapped population." Boldyrev added, "It turns out that our results agree very well with measurements of the temperature profile of the solar wind and they may explain why the electron temperature declines with the distance so slowly."

Boldyrev said, "Maybe we'll even find some interesting phenomena in those experiments that space scientists will then try to look for in the solar wind. It's always fun when you start doing something new. You don’t know what surprises you'll get."