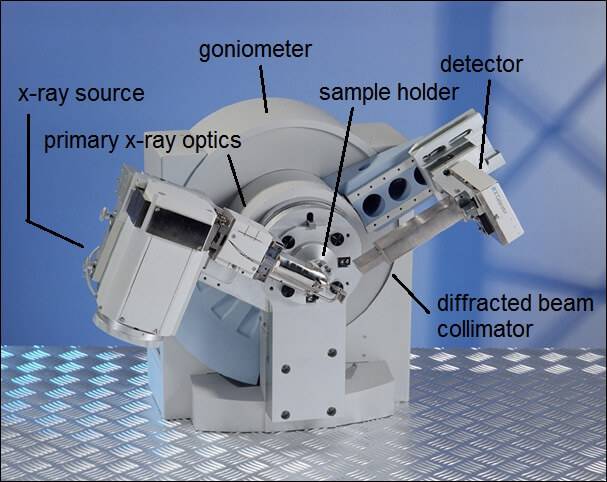 X-ray Diffraction (XRD) is a non-destructive rapid analytical technique that is primarily used to determine the crystallographic structure of a material and can provide information on unit cell dimensions. This technology can be used to measure both the physical and chemical properties of crystalline powders, thin films, epitaxial films, and bulk solid materials.

The atomic planes of a crystal cause an incident beam of X-rays to interfere with one another as they leave the crystal. The phenomenon is called X-ray diffraction.

A major component of XRD- X-rays were first discovered in 1895 by the German physicist Wilhelm Röntgen who named it X-ray because their nature was unknown at the time. It was the hand of Röntgen’s wife Anna Bertha Ludwig that Röntgen used X-ray and photograph the internal structure of bones. Today it is clear that x-rays are electromagnetic radiation of exactly the same nature as light but of a very much shorter wavelength. Later the technology was explored and got wider applications in the real world including a crucial one; diffraction technology. In the electromagnetic spectrum, X-rays correspond to the wavelengths of range 0.1 to 10 Angstrom, and X-rays used in diffraction have wavelengths that lie approximately in the range 0.5 to 2.5 Angstrom.

X-rays are used to produce the diffraction pattern because their wavelength, λ, is often the same order of magnitude as the spacing, d, between the crystal planes.

All diffraction methods are based on the generation of X-rays in an X-ray tube.

X-rays are produced whenever high-speed electrons collide with a metal target, and any X-ray tube must contain;

(a) a source of electrons

(b) a high accelerating voltage and

X-ray diffraction is based on constructive interference of monochromatic X-rays and a crystalline sample. A crystal may be defined as a solid composed of atoms, ions or molecules arranged in a pattern periodic in three dimensions. While dealing with the crystals, it is often convenient to ignore the actual atoms, ions, or molecules and to focus on the geometry of periodic arrays where the crystal is represented as a lattice; a three-dimensional array of points (lattice points), each of which has identical surroundings. Images below shows how crystals look like.

These regular arrays of atoms in the crystal atoms scatter the incident X-rays where electrons of the atoms play a crucial role to scatter. This phenomenon is known as elastic scattering; the electron is known as the scatterer. The interaction scatters the incident X-ray beam in directions. In the majority of directions, these waves cancel each other out through destructive interference, however, they add constructively in a few specific directions

which principally satisfies Bragg's Law. mathematically the Bragg’s law is

Where λ is the wavelength of the incident X-ray beam, n is an integer, d is the interspacing distance (on which the X-ray is incident), and θ is the angle of incidence.

X-rays are generated in a cathode ray tube by heating a filament to produce electrons, accelerating the electrons toward a target by applying a voltage, and bombarding the target material with electrons. When electrons have sufficient energy to dislodge inner shell electrons of the target material, characteristic X-ray spectra are produced. These spectra consist of several components, the most common being K𝞪 and K𝞫. These X-rays are collimated and directed onto the sample. As the sample and detector are rotated, the intensity of the reflected X-rays is recorded. When the geometry of the incident X-rays impinging the sample satisfies Bragg’s law, constructive interference occurs and a peak in intensity appears. A detector records and processes this X-ray signal and converts the signal to a count rate, which is then output to a device such as a printer or a computer monitor.

The geometry of an X-ray diffractometer is such that the sample rotates in the path of the collimated X-ray beam at an angle u while the X-ray detector is mounted on an arm to collect the diffracted X-rays and rotates at an angle of 2u. The instrument used to maintain the angle and rotate the sample is termed a goniometer.