Yes, Magnetar Produces Fast Radio Bursts (FRBs) But No One Knows Exactly How? 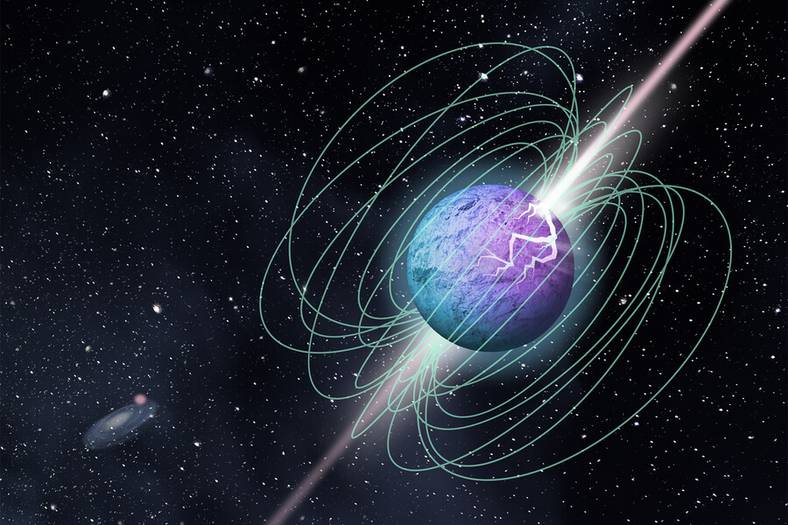 The fast radio bursts are likely generated by a magnetar, the most magnetic type of star in the universe, and astronomers detect one within our own Milky Way galaxy.

It was in 2007 when astronomers confirmed the first detection of Fast Radio Bursts (FRBs) where they also observed its traces, scattered across the universe, but their sources have been too far away to clearly make out; where they came from. Hence, it has long been a mystery object, as to what astrophysical objects could possibly produce such brief though brilliant radio flares.

But it seems like astronomers have somewhat solved the puzzle. A collaborative team of researchers from  CHIME/FRB Collaboration including MIT, McGill University, the University of British Columbia, the University of Toronto, the Perimeter Institute for Theoretical Physics report that they have observed fast radio bursts in our own galaxy and this record happens for the first time. They claimed that the radio pulses are the closest FRBs detected to date, and their proximity has allowed the team to pinpoint their source.

The event was officially confirmed as an FRB earlier this month and given a name - FRB 200428.

Kiyoshi Masui, assistant professor of physics at MIT, who led the team’s analysis of the FRB’s brightness said, “There’s this great mystery as to what would produce these great outbursts of energy, which until now we’ve seen coming from halfway across the universe. This is the first time we’ve been able to tie one of these exotic fast radio bursts to a single astrophysical object.”

The research shows that the radio pulses were produced by a magnetar. Long ago physicists have hypothesized that magnetars might produce FRBs but this is the first time scientists have direct observational proof that magnetars are indeed sources of fast radio bursts.

A magnetar is a type of neutron star believed to have an extremely powerful magnetic field mathematically ∼109 to 1011 Tesla. These mysterious objects aren't powered by a conventional mechanism such as nuclear fusion or rotation but a very high magnetic field is all what power-up them and emits high-energy electromagnetic radiation, particularly X-rays and gamma rays. Though the theory governing the existence of magnetar came in 1992, the first recorded burst of gamma rays thought to have been from a magnetar had been detected on March 5, 1979.

It was only in 2020, astronomer narrowed down the source of  FRBs which may now plausibly include compact-object mergers and magnetars arising from normal core-collapse supernovae but still, the things associated with FRBs used to be baffling.

The detected burst contained two sub-bursts, within several milliseconds of each other, signalling a fast radio burst. This magnetar SGR 1935+2154 is among a handful of known magnetars in our own galaxy.

Masui said, “There was some buzz in the astronomy community about this magnetar that had become active in the X-ray, and it had been mentioned within our collaboration that we should keep an eye out for something more from this magnetar.”

Astronomers then were able to track the radio bursts to a point in the sky that was within a fraction of a degree of SGR 1935+2154 - the same magnetar that was blasting out X-rays around the same time.

About the other possible source, Masui said, “If it was coming from any other object close to the magnetar, it would be a very big coincidence.”

Measuring the brightness of the magnetar as it was generating the radio bursts was challenging and also tricky because the bursts were detected at CHIME’s periphery, where the telescope remains less sensitive. But they searched for the alternative and used calibration data from other astrophysical sources to estimate the magnetar’s brightness.

Masui said, “Measuring its brightness was really what established this is not a normal pulse. This is a fast radio burst happening in our own galaxy, that is thousands of times brighter than any other pulse we’ve ever seen.”

In the end, they calculated that the magnetar, in the fraction of a second that the FRB flashed, was 3,000 times brighter than any other magnetar radio signal that has yet been observed.

This discovery let us know that the magnetar does produce fast radio bursts, however, the question remains: how?

Scientists are unsure of exactly how FRBs are generated in the universe, and specifically, how magnetars might produce them. It is well-understood that most radio emissions in the universe are produced through a process known as synchrotron radiation where randomly moving high-energy electrons interact with magnetic fields, in a way that emits energy at radio frequencies and we detect them.

This approach of radio emission is what is believed to happen at the supermassive black holes, supernova remnants, and hot gas sitting in galaxies, however, magnetar may generate radio waves utterly by a different approach; by a process similar to the way in which we practically generate radio waves on Earth- by directing electrons through a wire, in the same direction.

Masui said, “We think some sort of process like that, some coherent currents running through space, is causing this radio emission that we see. The mechanics of how that happens astrophysically, in magnetars or pulsars, is not well-understood.”

To validate this discovery, other groups have trained different telescopes on the source and even reported that the magnetar has emitted subsequent radio bursts, though not nearly as intense as the initial FRB.

“It’s been doing interesting things, and we’re trying to piece together what it all means,” Masui says. “We’ve got our eyes open for other magnetars, but the big thing now is to study this one source and really drill down to see what it tells us about how FRBs are made.

The researchers have published their results today in the journal Nature.