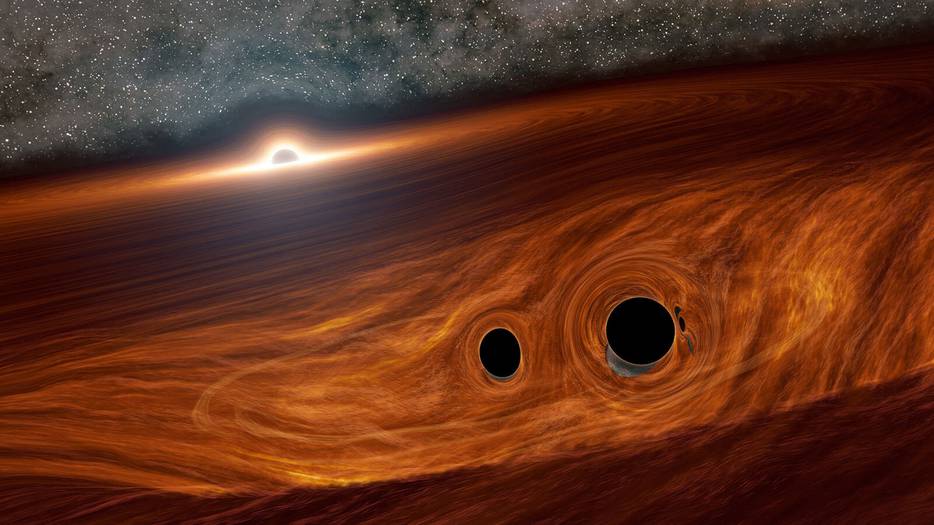 This artist's concept shows a supermassive black hole surrounded by a disk of gas. Embedded in this disk are two smaller black holes that may have merged together to form a new black hole. Image credit: Caltech/R. Hurt (IPAC)

After 100 years of the Einsteins prediction and calculation of the gravitational waves, astronomers from the LIGO and Virgo collaborations, for the first time, finally were able to capture a gravitational wave from the merging of binary black holes on 14 September 2015 (announced by researchers on 11 February 2016). Gravitational-wave observations are made in ‘runs’ and till now three runs are made. The latest third run (O3) began on 1 April 2019. So far O3 is divided into O3a- from 1 April to 30 September 2019, and O3b, from 1 November 2019 to 27 March 2020. In each run interval detector’s equipment will be upgraded and somehow improved so the sensitivity of the detectors also increases. During the runs, astronomers detected unique gravitational waves - from the merging of uneven size binary black hole, from the binary neutron star and even one from a black hole and an unknown mass (maybe a black hole or a neutron star).

Immediately after astronomers detect the gravitational waves from space, they will send signal to the ground and space light-based telescopes to search for the light source in that particular region of space. Till now, astronomers were able to get the electromagnetic counterpart of the gravitational wave (GW170817, from two neutron stars) and the finding was published in the journal The Astrophysics Journal Letters in 2017 October 16.

Astronomers from LIGO and Virgo collaboration have again detected a light (electromagnetic) counterpart of the gravitational wave but this time, not from the merging of neutron stars, instead, from the merging of a binary black hole system. The research work was published in the journal Physical Journal Letters on 25 June 2020. They used Caltech's Zwicky Transient Facility (ZTF) located at Palomar Observatory near San Diego.

Matthew Graham, a research professor of astronomy at Caltech, the project scientist for ZTF and also the lead author of the study said, "This supermassive black hole was burbling along for years before this more abrupt flare. The flare occurred on the right timescale, and in the right location, to be coincident with the gravitational-wave event. In our study, we conclude that the flare is likely the result of a black hole merger, but we cannot completely rule out other possibilities."

From the initial analysis of the gravitational waves and light, scientists suspect that the flare originated from two small black holes merging within the accretion disk of the supermassive black hole.

Astronomer believes that the flare didn’t come from the merger itself but instead came out when two partner black holes were nestled within a disk surrounding a much larger black hole. As the black holes merge it will convert into a larger single mass black hole that experiences a kick that sends it off in a random direction, and it plows through the gas in the disk. Barry McKernan, coauthor said, "It is the reaction of the gas to this speeding bullet that creates a bright flare, visible with telescopes.”

Generally, such a flare is expected to be seen within a few days/weeks after the initial splash of the gravitational waves produced by the merger. But in this case, astronomers detected a flare when they went back and looked through archival ZTF images months later, they found a signal that started days after the May 2019 gravitational-wave event. They saw the flare slowly fading over the period of a month.

K. E. Saavik Ford of the City University of New York (CUNY) Graduate Center, the Borough of Manhattan Community College (BMCC), and the American Museum of Natural History (AMNH) and a co-author of the study said. “At the center of most galaxies lurks a supermassive black hole. It's surrounded by a swarm of stars and dead stars, including black holes.” He added, "These objects swarm like angry bees around the monstrous queen bee at the center. They can briefly find gravitational partners and pair up but usually lose their partners quickly to the mad dance. But in a supermassive black hole's disk, the flowing gas converts the mosh pit of the swarm to a classical minuet, organizing the black holes so they can pair up.”

Astronomers tried to get a more detailed look at the spectrum of the supermassive black hole but they didn’t get success as, by the time they looked, the flare had already faded. Tough researchers have already ruled out other possible causes for the observed flare, including a supernova or a tidal disruption event, detecting a spectrum will have offered a more supportive idea that the flare came from merging black holes within the disk of the supermassive black hole.

More study, in the future, is needed to guarantee that this explanation fits what had happened in real.