It's Confirmed, Einstein Theory of General Relativity is Still Valid 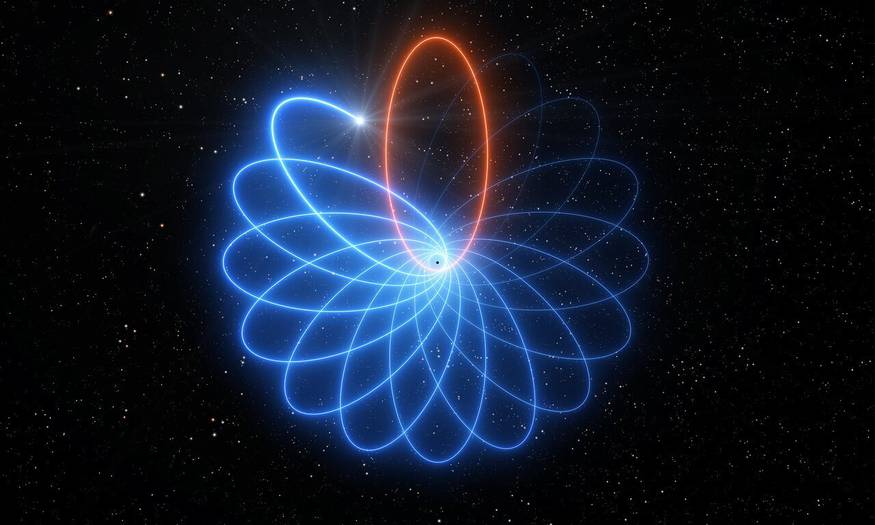 This wish has been completed by a team of astronomers using European Southern Observatory’s Very Large Telescope (VLT) and revealed for the first time that a star orbiting the supermassive black hole at the centre of the Milky Way follow the path just as predicted by Einstein’s general theory of relativity.

A paper describing the research work was published in the journal Astronomy & Astrophysics on 16 April 2020.

The research was conducted by an international team led by Frank Eisenhauer of the Max Planck Institute for Extraterrestrial Physics (MPE) with collaborators from France, Portugal, Germany, and European Southern Observatory (ESO).

One of the very solutions to the theory of General Relativity explains is the highly elliptical orbit of Mercury and this has been tested long ago by different means and the theory of General Relativity stands still in its prediction. Now the same kind of observation has been seen in star’s orbit of the enormous black hole at the centre of the Milky Way galaxy by the researchers from GRAVITY collaborations.

Reinhard Genze, Director at the Max Planck Institute for Extraterrestrial Physics (MPE) in Garching, Germany and the architect of the 30-year-long program that led to this result said, "Einstein’s General Relativity predicts that bound orbits of one object around another are not closed, as in Newtonian Gravity, but precess forwards in the plane of motion. This famous effect - first seen in the orbit of the planet Mercury around the Sun - was the first evidence in favour of General Relativity. One hundred years later we have now detected the same effect in the motion of a star orbiting the compact radio source Sagittarius A* at the centre of the Milky Way. This observational breakthrough strengthens the evidence that Sagittarius A* must be a supermassive black hole of 4 million times the mass of the Sun."

Sagittarius A* at the Milky Way galaxy is located somehow 26000 light-years from our star, Sun, and its dense cluster of stars provide a unique laboratory for testing physics in an otherwise unexplored and extreme regime of gravity. Also, as a star in its dense cluster, star, S2, sweeps in towards the supermassive black hole to the closest distance less than 20 billion kilometres, this make S2 the closest stars ever found in orbit around the massive giant black hole and this also make Sagittarius A* a promising theory of General Relativity testing site for astronomers.

Previously, at its closest approach to the black hole, astronomers observed that the S2 is rushing through space at almost three percent of the speed of light and it completes its one orbit around the black hole every 16 years.

Stefan Gillessen of the MPE, who led the analysis of the same measurements said, "After following the star in its orbit for over two and a half decades, our exquisite measurements robustly detect S2’s Schwarzschild precession in its path around Sagittarius A*."

The team has been monitoring the star’s, S2, radial velocity and motion on the sky for over the last 2.7 decades. They have been tracking the star S2 mainly with the Spectrograph for Integral Field Observations in the Near INfrared (SINFONI) and NACO adaptive optics instruments on the ESO VLT, and since 2017, with the four-telescope interferometric beam combiner instrument GRAVITY. The made-over 330 measurements in total. The number of data points marking the star’s position and velocity indicates the thoroughness and accuracy of the new research.

The Paranal Observatory’s Nasmyth Adaptive Optics System (NAOS) + Near-Infrared Imager and Spectrograph (CONICA) instrument, better known as NACO, is one of the best ground-based solutions to atmospheric turbulence. With the use of adaptive optics, NACO can deliver a sharp image as if it was taken in space.

The observation of the star S2 was previously used by the same team in the detection of the gravitational redshift near the galactic centre massive black hole.

The theory of General Relativity predicts that most stars and planets have a non-circular orbit and therefore move closer to and further away from the object they are rotating around. This means that the location of the closest point on which they are rotating changes with each turn such that the next orbit is rotated with regard to the previous one, creating a rosette shape. In a scientific term, this process is known as Schwarzschild precession and this effect had never before been measured for a star around a supermassive black hole.

From the observation, astronomers confirmed that S2 has been following the same prediction of orbit as explained by the theory of General Relativity.

This unprecedented study with ESO’s VLT clearly helps scientists to learn more about the phenomenon that occurs in the vicinity of the supermassive black hole.

Guy Perrin and Karine Perraut, the French lead scientists of the project said, "Because the S2 measurements follow General Relativity so well, we can set stringent limits on how much invisible material, such as distributed dark matter or possible smaller black holes, is present around Sagittarius A*. This is of great interest for understanding the formation and evolution of supermassive black holes."