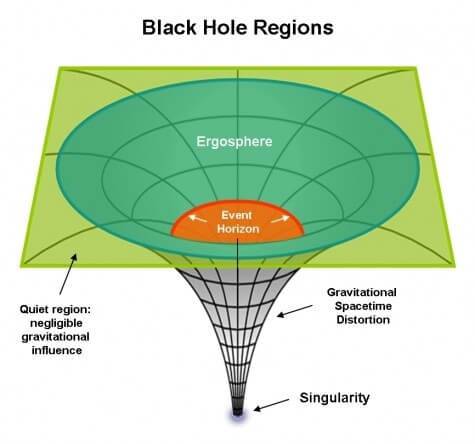 A black hole is a region in a space where the gravitational pull is so strong that no object, even electromagnetic radiation like light can not escape from the region. The boundary of the region from where nothing can escape is called an event horizon. The idea of such a massive object that even electromagnetic radiation can not escape was proposed by John Michell in November 1782. Michell also noted that such a supermassive, non-radiating body might be detectable by their gravitational effects on the visible nearby objects.

Where G is the gravitational constant, M is the mass of the object, and c is a universal constant called the speed of light.

Physically, this signifies that the Schwarzschild radius determines if the objects like stars will become a black hole or not, and also this radius defines the region of the event horizon.

The distance from the centre of the black hole to the region of the event horizon is the Schwarzschild radius.

These classifications are mainly based on the mass of the black holes.

On April 10, 2019, a research team at Event Horizon Telescope involving international collaboration team announced, by series of six papers published in a special issue of The Astrophysical Journal Letters, that they have succeeded on unveiling the first direct visual evidence of a supermassive black hole and its shadow. The image revealed by the team was of a black hole at the centre of Messier 87 and lies at 55 million light-years from Earth and has a mass 6.5 billion times that of the Sun.