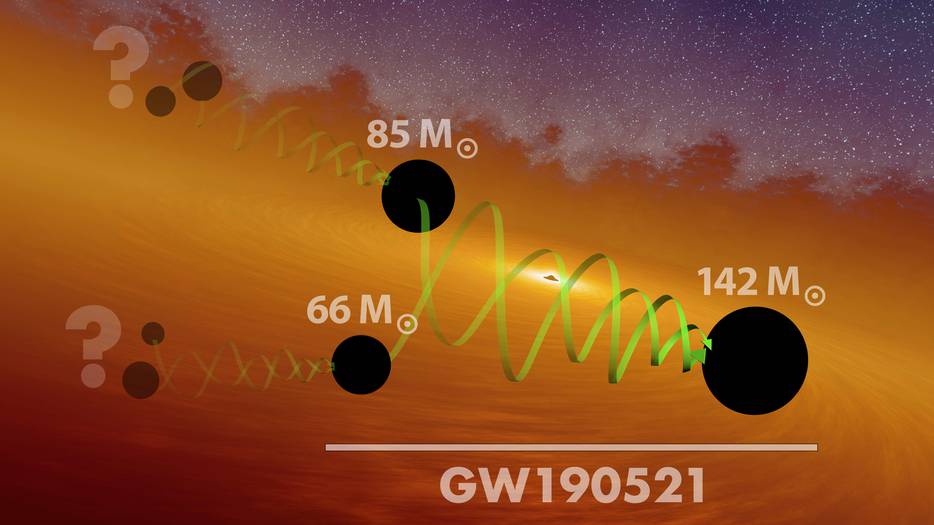 Earlier on August 14, 2019, a team of astronomers, using the LIGO and Virgo detectors, detected a gravitational wave from the coalescence of a 23 solar mass black hole with a 2.6 solar mass compact object. This observation then unveiled the mystery of the extensive universe and astronomers were confirmed that this much of heavy black holes exists in the universe. Similarly, on April 12, 2019, astronomers from LIGO and Virgo detected a gravitational wave (GW190412) from the collapsing of an uneven size black hole.

The detection of gravitational waves started in 2015 and that detection proved that Albert Einstein’s theory of gravity is valid until now.

This detection of gravitational waves from such a huge mass final black hole is the first clear detection of an “intermediate-mass” black hole, with a mass between 100 and 1,000 times that of the sun.

The detected gravitational wave was extremely brief in duration, lasting less than one-tenth of a second however, the final black hole is the most massive ever detected with gravitational waves. With respect to previous gravitational-wave detections, the observed GW190521 signal is very short in time and more difficult to analyse.

This detection does not only indicates to have arrived from a huge intermediate black hole but also indicates that GW190521 was generated by a source that is roughly 5 gigaparsecs away, when the universe was about half its age, making it one of the most distant gravitational-wave sources detected so far.

“This doesn’t look much like a chirp, which is what we typically detect,” says Virgo member Nelson Christensen, a researcher at the French National Centre for Scientific Research (CNRS), comparing the signal to LIGO’s first detection of gravitational waves in 2015. “This is more like something that goes ‘bang,’ and it’s the most massive signal LIGO and Virgo have seen.”

Using the powerful suite of state-of-the-art computational and modeling tools, astronomers were convinced that GW190521 was most likely generated by a binary black hole merger with unusual properties.

“LIGO once again surprises us not just with the detection of black holes in sizes that are difficult to explain, but doing it using techniques that were not designed specifically for stellar mergers,” says Pedro Marronetti, program director for gravitational physics at the National Science Foundation. “This is of tremendous importance since it showcases the instrument’s ability to detect signals from completely unforeseen astrophysical events. LIGO shows that it can also observe the unexpected.”

This detection has somehow confirmed that one or both of the merging black holes may not have formed from a collapsing star, as most stellar-mass black holes do. Several different scenarios are still compatible with the shown results and even the hypothesis that the progenitors of the merger might be primordial black holes has not been discarded by scientists.

In brief, though the evolution of a star depends on the stellar mass, a star having sufficient mass will eventually run out of fuel and collapses under its own weight into a black hole.

Astronomers estimate that this merger occurred about 7 billion years ago, a time close to the ancient ages of the Universe.

In fact, the Virgo and LIGO GW190521 detection highlight the existence of black-hole populations that have never been observed before or are unexpected and, in so doing, raises intriguing new questions about their formation mechanisms. Despite the unusually short duration of the signal, which limits our ability to infer the astrophysical properties of the source, the most advanced analyses and models currently available suggest that the initial black holes had strong spins, that is to say, they were rotating rapidly.

“The signal shows hints of precession, a rotation of the orbital plane produced by spins with large magnitude and particular orientation”, states Tito Dal Canton, CNRS researcher at IJCLab in Orsay, France, and member of the Virgo Collaboration. “The effect is weak and we cannot claim it is definitely present, but if true, it would support the hypothesis that the progenitor black holes arose and lived in a very shaky and crowded cosmic environment, like a dense star cluster or the accretion disk of an active galactic nucleus.”

The scientific papers describing the work was published in the Physical Review Letters, and The Astrophysical Journal Letters on 2 September 2020.