Event Horizon, Singularity and Photon Sphere of a Black Hole 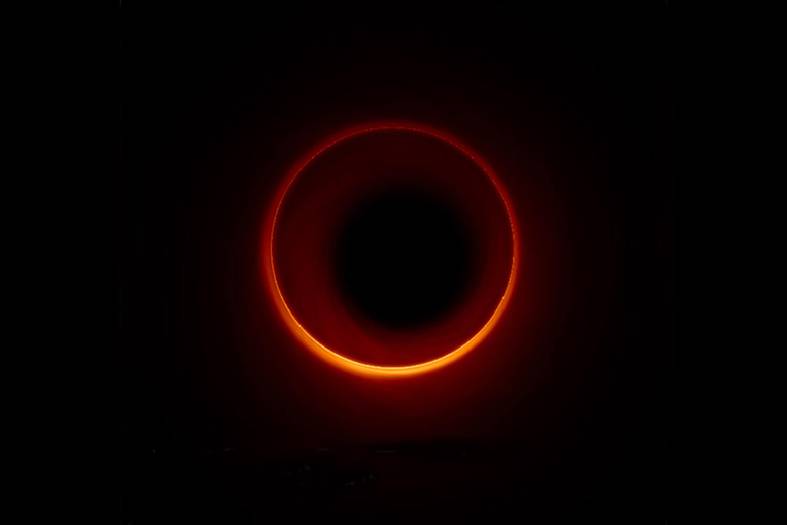 Image showing Blackhole casting a shadow on the glow of surrounding material. This happened because their strong gravitational field can bend and trap light and the ring is actually not a single ring but a stack of increasingly sharp sub-rings. This image is from the study, "Universal interferometric signatures of a black hole’s photon ring."​​​​​​ Image © Harvard University/The Harvard Gazette.

Event Horizon of a Black Hole

Event Horizon was referred to this region because for any object the region of an event horizon is the ultimate wall that they can cross while going in but can never cross while coming out of a black hole. In this region, the escape velocity for an object exceeds the speed of light which is only practically possible for natural particles.

After this point, the information about that object to the outsider will be lost and more predictions of that object will be restricted. At the region of the event horizon, the presence of a mass deforms the spacetime in such a way the path taken by particles bend towards the mass and so there exists no path that leads particles away from the black hole.

For instance, if Earth-like mass of an object is compressed until it became a black hole, it would have a diameter of about 0.69 inches (17.4 millimeters).

The Singularity of the black hole

At the center of a black hole, there is a one-dimensional point that holds huge mass within the infinitely small space which is called the singularity of a black hole. At this point the density and gravity become infinite and the space-time curves infinitely. Moreover, due to these aberrant properties, the physical laws as we have known until now fail to operate at this point. For a continuously rotating black hole, the point of singularity is disseminated to form a ring-like structure and for a non-rotating black hole, this point is a single pint like structure.

As the object approaches the point of singularity, it will be stretched (assumed to tear apart out) due to the differential gravitational attraction acting on different parts of an object. For an observer falling into a non-rotating and not charged black hole, it will not be possible to avoid the singularity once they cross the event horizon, whereas, it will be possible in the case of rotating or charged black hole.

Photon Sphere of the Black Hole 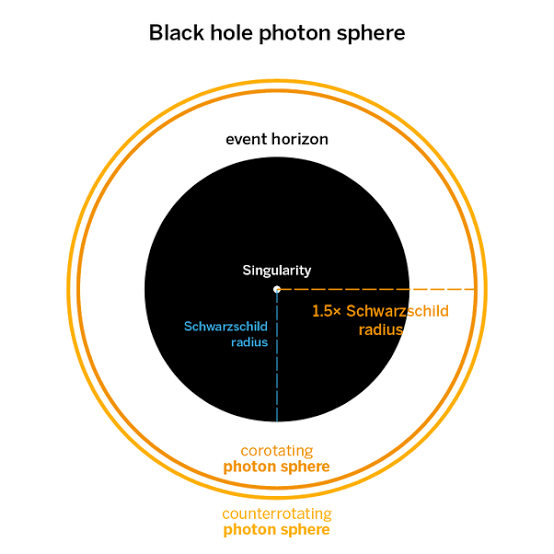 Far away from the center of a black hole and from the event horizon, there exists a region of space where due to the strong gravity effect, photons are forced to travel in orbits and the region is called the photon sphere. Mathematically, the photon sphere is a sphere at a distance 3/2 Rs where Rs is the Schwarzschild radius.

Any kind of small perturbation will cause instability of photons in this (Photon orbit) and that will grow over time. This either sets off the photons to escape from the black hole and eject them towards event horizon and due to the extreme gravitational force those photon travel in circles. So we see the glowing structure out of the central black region.