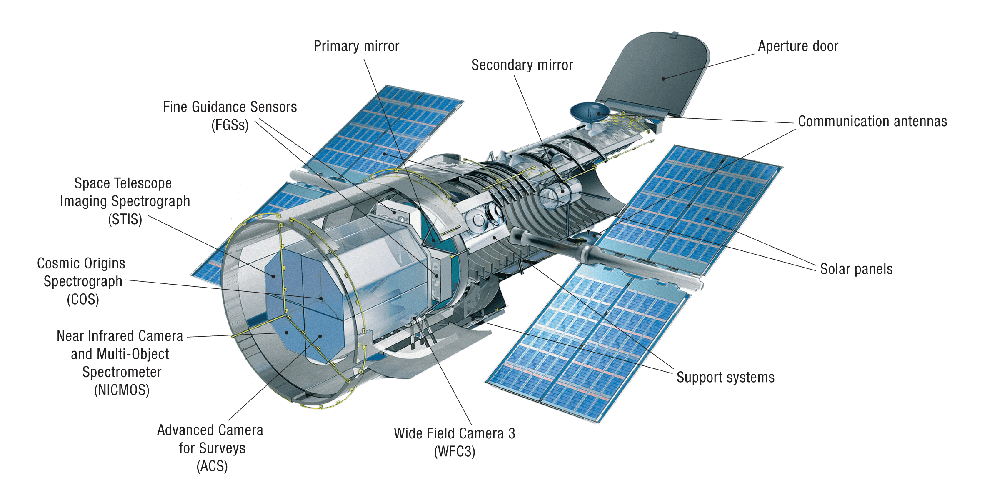 Hubble Space Telescope (HST) has been hunting the enormous universe and is always at the frontline for astronomers to reveal the mystery of the universe. For its long designed journey, it has been equipped with advance scientific equipment and functions. The instruments mounted on the Hubble Space Telescope can collectively detect and read the wavelengths ranging between ultraviolet and infrared and for this astronomers have designed the telescope in such a way that each instrument is able to operate in a particular wavelength range with almost perfection.

The current suite of instruments is listed below.

WFC3 is primarily designed to make Hubble capable of imaging astronomical targets over a wide range of wavelengths together with, as the name suggests, a large field of view.

Hubble is fitted with two independent light paths where one path is a UV and optical channel which uses a pair of charge-coupled devices (CCD), each 2048×4096 pixels, and another is near-infrared detector array (1024×1024 pixels) that is designed to cover the wavelength range 800-1700 nm.

The WFC3 in the HST probes deeper into infrared and ultraviolet wavelengths. For this wide range of detection, WFC3 is configured with a two-channel instrument. The fitted dual-channel design that uses two detector technologies made WFC3 possible to cover a wide wavelength range with high efficiency. Using a pick-off mirror, light beams from the collector of the Hubble Space Telescope will be directed into WFC3 where they are directed o either the Ultraviolet-Visible (UVIS) channel or the Near-Infrared (NIR) channel. The UVIS channel uses Charge Coupled Device (CCD) whereas the surface of the NIR detector is composed of mercury, cadmium, and tellurium (HgCdTe).

The NIR channel of WFC3 can not detect and read infrared light longer in wavelength than 1700 nm but this is not its limitation rather this limitation is intentional. Because of that, it is unnecessary to use a cryogen (e.g., liquid or solid nitrogen) to cool the detector rather they are chilled with an electrical device called a thermo-electric cooler and this gives WFC a relatively longer operational lifespan.

ACS is also called third-generation instrument whose wavelength range extends from the ultraviolet, through the visible and out to the near-infrared. It can also perform spectroscopy with a special optical tool called grism.

ACS was first launched on March 1, 2002 (during the telescopes Servicing Mission 3B) and installed in HST on March 7 that replaced the older the Faint Object Camera (FOC). But in 2007, January, two of the most used science channels went beyond operation and malfunctioned. Those operating channels were repaired during the Servicing Mission 4, however, the high-resolution channel (HRC) could not be repaired.

Basically, ACS is made up of three sub instruments called Wide Field Channel, High-Resolution Channel, and Solar Blind Channel where every instrument is designed for their own special work.

Though HRC has been disabled since 2007, this device was designed to provide ultra-sharp views over a smaller field-of-view. The HRC detector was made from a 1024×1024 SITe CCD.

Next, WFC is the most useful channel for ACS whose detector consists of two, tight to each other, 2048x4096, 15 µm/pixel charge-coupled devices (CCDs) for a total of 16 megapixels manufactured by Scientific Imaging Technologies (SITe) and this can work on an optical and near-infrared range.

Finally, the Solar Blind Channel blocks visible light to allow faint ultraviolet radiation to be discerned and can also study weather patterns on other planets and aurorae on Jupiter.

Further, ACS encompassed 38 filters and dispersers that are distributed among three wheels where two wheels are for HRC and WFC light paths and the third is for the Solar Blind Channel.

With the ability of ACS, astronomers were able to capture the most detailed images of the dwarf planets Pluto, ever taken. The images reveal an icy, mottled, dark molasses-colored world undergoing seasonal surface and brightness changes which is regarded as a great achievement.

With the purpose to study the origins of large scale structures in the universe, the formation and evolution of galaxies, and the origin of stellar and planetary systems and the cold interstellar medium HST was installed with COS during Servicing Mission 4 in May 2009. It also helps us in determining the formation of elements considered essential for life, such as carbon and iron. Performing spectroscopy, through this Hubble Space Telescope, provide us a spectrograph data and serves astronomers in studying temperature, density, chemical composition, and velocity of any objects that absorb or emit light.

Incoming photons induce shower of electrons and subsequently, the electrons are accelerated, captured, and counted in electronic circuitry immediately behind the micro-channel plates. Micro-channel plates are the plates where the light-sensing detectors of both channels of COS are designed around.

COS and STIS are complementary instruments that provide scientists with detailed spectral data for a variety of celestial objects and working together, the two spectrographs provide a full set of spectroscopic tools for astrophysical research.

Space Telescope Imaging Spectrograph (STIS) has three 1024×1024 detector arrays that cover a wide range of wavelengths from the near-infrared region into the ultraviolet, combining a camera with a spectrograph. Replacing the High-resolution spectrograph and the faint object spectroscopy, STIS was installed during Hubble’s second servicing mission in 1997.

Though it was designed to remain in complete operation for five years, an electronic failure forced it to stop its operation in August 2004, after almost two years beyond the predicted working span. Then it was brought back in operation on May 11, 2009, through servicing mission 4.

As the name suggests- NICMOS is specially designed for infrared astronomy and is a combination of an imager and a spectrometer. With this NICMOS, first conceived and designed by the NICMOS Instrument Definition Team centered at Steward Observatory, University of Arizona, USA, Hubble can observe and record infrared light of wavelengths between 0.8 and 2.4 micrometers. Though it provides astronomers a never-before-seen level of quality in near-infrared performance at that time and slitless spectroscopy, it was not designed with infrared performance as an objective and so it has limitations.

Slitless spectroscopy: Outer space contains a huge number of stars and the planet system and focusing the spectroscopic camera as we are required from such a distance like from Earth is merely an easy task as its hard to eliminate the lights from the other nearby stars. In many cases, the stars are away from each other and still it spreads each point source out into the spectrum. So scientists use a method called slitless spectroscopy where the spectroscopy is done without a small slit to allow only light from a small region to be diffracted.

NICMOS contains three cameras that are specially designed for the simultaneous operation and the optics used serve as a field of view, for the detectors, of different image scales. NICMOS is fitted with a variety of filters, grisms, and polarizers. The data are processed by components like grism spectroscopy and WEC3 and then NICMOS Fore-Optics Assembly will fully correct the spherically aberrated HST input beam.

The Hubble Space Telescope is a flying telescope and for its better use and developing a better imaging capacity, it must be almost precisely steadily focused at the desired field. For a stable and precise shot, mathematically, this can scan the sky field with an accuracy of 0.01 arcsecond, HST is fitted with three instruments used for pointing the telescope in space- collectively called fine guidance sensor where those three FGSs are located at 90-degree intervals around the circumference of the telescope. Each FGS uses a combination of optics and electronics to provide for pointing the telescope at a certain location in the sky and to perform celestial measurements.

FGS is an optical sensor that is designed to provide pointing information for the spacecraft and as a scientific instrument for astrometric science and consists of mirrors, lenses, servos, prisms, beam-splitters, and a photomultiplier tube.

In the HST three FGS sensors are placed where two of the three sensors work for pointing the telescope at an astronomical target and then hold that target steady in a scientific instrument’s field of view and the third FGS operates as a scientific instrument. The pointing sensors lock onto “guide stars” and measure the position of the telescope relative to the object being studied and with the regular adjustments, HST can measure the star’s position that is 10 times more precise than those observed from a ground-based telescope and this is done by acting as an interferometer device that uses a pair of prisms to detect small angular changes of a guide star’s position.

With all the advanced science and engineering Hubble has the ability to remain pointed at that target with no more than 0.007 arcseconds deviation over a day which on comparing is equal to hold a laser beam focused on Franklin D. Roosevelt’s head on a dime roughly 200 miles away, about the distance between New York City and Washington, D.C.

When used for astrometric science purpose HST can do space search like the search for a wobble in the motion of nearby stars which can indicate the presence of a planetary companion, determine if certain stars are double stars or many stars system, precisely measure the angular diameter of stars, galaxies, and other celestial objects, etc.