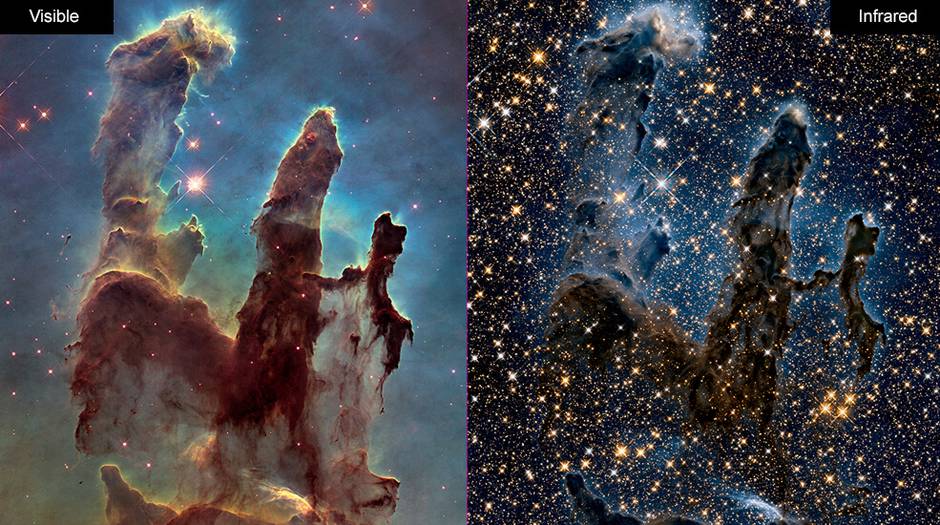 These images of the Eagle Nebula demonstrate Hubble’s ability to capture stunning images in both visible (left) and infrared (right) light. Image © NASA

You must have seen an image of the above kind and thought the image is animated or not real. But you would be true only if we don't have Hubble Space Telescopes which can capture such extraordinary images.

On April 24, 1990, 12:33:51 UTC, NASA (operators are NASA, ESA, and STScI) launched an 11,110 kg telescope from its launch site Kennedy LC-39B using its Space Shuttle Discovery (STS-31) rocket with a long mission to capture a detailed image of the space and its contents so to unveil the secrets of the vast universe. Heretofore, it has been more than 30 years of its operation, and as expected, Hubble Space Telescope (HST) has successfully recorded some of the most detailed visible-light images, allowing a deep view into space and is continuously hunting the extensive space.

The orbit of Hubble lies at approximately 570 km above the ground, inclined at 28.5 degrees to the Equator. The telescope whirls around Earth at 28,000 kilometres an hour and takes 96 minutes to complete one orbit.

Though the projected mission duration already elapsed,  it is still in operation and restlessly hunting the outer space contents with unprecedented precision and resolution power.

The processing of collected data and the target for the HST is accomplised by the Space Telescope Science Institute (STScI) whereas the Goddard Space Flight Center controls the spacecraft. Initially, Hubble was proposed to be launched in 1983 but due to the technical delays and the funding problems, it was delayed and finally launched in1990. The delay in launching of this telescope is also somehow connected with the devastating Space Shuttle Challenger disaster that occurred on January 28, 1986.

Hubble Space Telescope is named after Edwin Powell Hubble (1889-1953) who was one of the great pioneers of modern astronomy.

The Space Shuttle Challenger (OV-099) broke apart after 73 seconds of its lift-up from the Earth, killing all seven crew members aboard. This failure is also an epitome of how a small precision matters in the space flight system and how accurate they need to be. The failure of Challenger was due to the failure of the seals, called O-ring, to adjust the unusually cold conditions that existed at this launch and that failure caused a breach in the SRB joint, which simultaneously allowed the pressurized burning gas from within the solid rocket motor to reach the outside hardware and external fuel tank.

Of course, you must have just thought ‘what about the mirrors used in such a massive telescope and who made such crucial mirrors?’

The Optical Telescope Assembly (OTA) and also the Fine Guidance Sensors of HST was built by the optics company Perkin-Elmer. When Hubble was successfully put on its orbit and came into operation, the images came to be less clear than expected and calculated. Hence to perceive the flaw in HST, NASA investigated to diagnose the problem. The problem was found to be with its mirrors: they detected an aberration one-50th the thickness of a human hair, in the grinding of the mirror. Again! Look at the sensitivity of the HST and also the precision required at the space missions. The problem was later after three years of its launch (during a shuttle mission in 1993, first servicing of the HST) fixed by designing and fixing Corrective Optics Space Telescope Axial Replacement (COSTAR) which is about the size of a telephone booth.

Have you ever thought what powers up the HST?

For all the space missions including International Space Station, the main power source of the computers and the systems is solar energy; they are fitted with solar panels. Similarly, power for the computers and scientific instruments onboard on the HST is provided by two 2.45 x 7.56 m solar panels. For the computers and system to remain working while it flies through the Earth's shadow, it is also fitted with six chargeable nickel-hydrogen batteries that were charged by the same solar-generated power. Those six chargeable batteries withstand HST for about 25 minutes.

Other major instruments of the Hubble Space Telescope are;

Operating with such sophisticated tools, Hubble transmits about 120 gigabytes of science data every week where the collection of pictures and data is stored on magneto-optical disks.

In order to take images of distant, faint objects, Hubble must be extremely steady and accurate. The telescope is able to lock onto a target without deviating more than 7/1000th of an arcsecond, or about the width of a human hair seen at a distance of one mile.

Hubble is specially designed to reveal the space that can not be seen and studies directly from Earth and so it is kept in space. Being in space does not solve the problem but rather needs precise accuracy and more importantly- precise stability. For its stability, HST is equipped with the magnetic sensing system that measures and acts as a compass system that can direct its orientation in relation to Earth’s magnetic field.

Observing at the wide ultraviolet and visible range, Hubble was designed with an aim to;