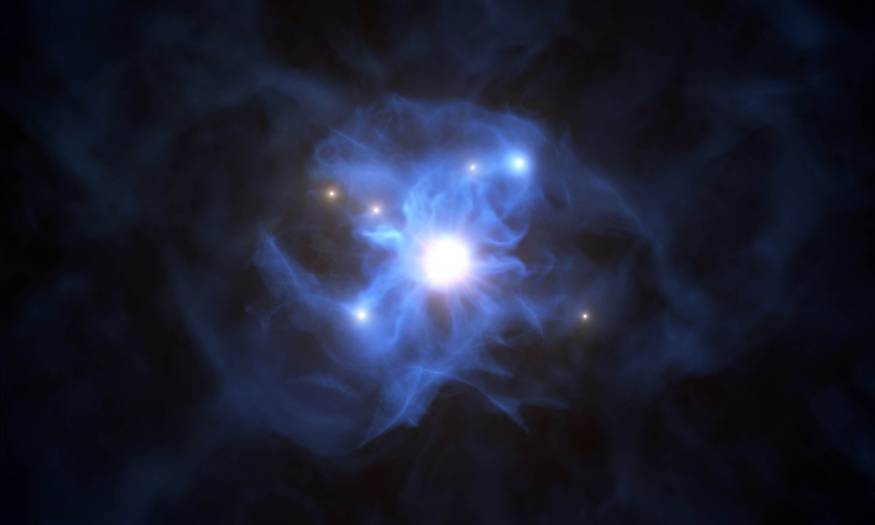 Artist’s impression of the web of the supermassive black hole. The black hole, which together with the disc around it is known as quasar SDSS J103027.09+052455.0, shines brightly as it engulfs matter around it. Image © ESO/L. Calçada

For the first time after the Big Bang- the event by which the universe is believed to came into its existence, astronomers with the help of ESO’s Very Large Telescope (VLT) have found at least six galaxies lying around a supermassive black hole. The mass black hole was measured to be one billion solar mass. [ 1 solar mass ≈ 2 × 1030 kg ]

Back in 2019, May 21, a team of astronomers from LIGO and Virgo collaboration detected a gravitatinal wave signal, labelled GW190521, providing the concert evidence on the existence of the intermediate-mass black holes and this observation now provide an evidence for the existence of supermassive black hole.

This unprecedented finding help astronomers to understand how the supermassive black holes like that at the centre of Milky Way galaxy formed and evolve to their enormous sizes so quickly. In case of a supermassive black hole, there is a consideration that black holes can grow rapidly within large, web-like structures which contain plenty of gas to fuel them and this finding buttressed this assumption.

Colin Norman of Johns Hopkins University in Baltimore, US, also a co-author on the study said, “Our finding lends support to the idea that the most distant and massive black holes form and grow within massive dark matter halos in large-scale structures, and that the absence of earlier detections of such structures was likely due to observational limitations”.

The team revealed the galaxies lie in cosmic spider’s web of gas that may have arisen with the help of dark matter. From the observational calculation, astronomer found the spider web of gas extending to over 300 times the size of the Milky Way.

Marco Mignoli, an astronomer at the National Institute for Astrophysics (INAF) in Bologna, Italy, and lead author of the new research “The cosmic web filaments are like spider’s web threads. The galaxies stand and grow where the filaments cross, and streams of gas - available to fuel both the galaxies and the central supermassive black hole - can flow along the filaments.”

The far galaxies are faintest, so was hard for our current telescopes technology to spot. But astronomers pushed the limitations collaborating with the largest optical telescopes available, including ESO's Very Large Telescope in Chile's Atacama Desert where the observation has to be made for several hours.

Using the Multi-Unit Spectroscopic Explorer (MUSE) and Focal Reducer and low dispersion Spectrograph (FORS2) instruments on the VLT at ESO’s Paranal Observatory in the Chilean Atacama Desert, the team confirmed the link between four of the six galaxies and the black hole.

MUSE is the second-generation integral-field spectrograph instruments installed on Yepun (UT4), the fourth Unit Telescope of the Very Large Telescope at the Paranal Observatory that allows astronomers to observe the entirety of an astronomical object in one go. For each pixel measures the intensity of the light as a function of its colour, or wavelength. The resulting data is a 3D set where each pixel of the image has a full spectrum of the light.

Co-author Barbara Balmaverde, an astronomer at INAF in Torino, Italy said, “We believe we have just seen the tip of the iceberg, and that the few galaxies discovered so far around this supermassive black hole are only the brightest ones.”

Another interesting aspect about this finding is that the light from this large spider web-like structure, with its supermassive black hole, has travelled to us from the time when the universe was just 0.9 billion years old.

Though astronomers have struggled to completely explain how sufficiently large amounts of “black hole fuel” could have been available to enable these objects to grow to such enormous sizes in such a short time, they think that the very first black holes may have formed from the collapse of the first stars and must have grown very fast to reach masses of a billion suns within the first 0.9 billion years of the Universe’s life.

The new-found structure offers a likely explanation: the “spider’s web” and the galaxies within it contain enough gas to provide the fuel that the central black hole needs to quickly become a supermassive giant.

Co-author Roberto Gilli, also an astronomer at INAF in Bologna, referring to supermassive black holes said, “Our work has placed an important piece in the largely incomplete puzzle that is the formation and growth of such extreme, yet relatively abundant, objects so quickly after the Big Bang.”

There also remains another confusion among us: how did the web-like structures form in the first place? But astronomer also has their preliminary explanation. They think giant halos of mysterious dark matter are key for the formation of spider web structures. These large regions of invisible matter are thought to attract huge amounts of gas in the early Universe; together, the gas and the invisible dark matter form the web-like structures where galaxies and black holes can evolve.

“Our finding lends support to the idea that the most distant and massive black holes form and grow within massive dark matter halos in large-scale structures, and that the absence of earlier detections of such structures was likely due to observational limitations,” says Colin Norman of Johns Hopkins University in Baltimore, US, also a co-author on the study.

A research paper describing the work was published in the journal Astronomy & Astrophysics on 1 October 2020.