Spectroscopy, its Use and Working 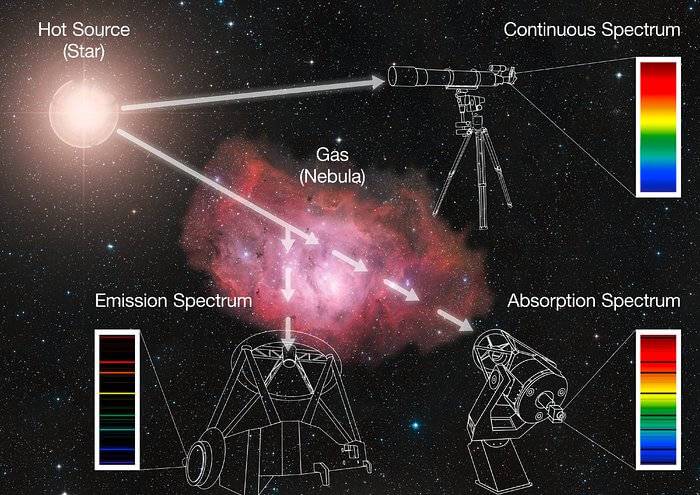 When the light from a star goes through the gas of a nebula - or even just the atmosphere of the star - specific colours (or wavelengths) are absorbed by the elements contained in the gas, producing dark lines over the continuum. This is an absorption spectrum. The energy that is absorbed by the gas is then re-emitted in all directions, also at the specific colours characteristic of the elements present in the gas, producing bright lines at certain wavelengths; this is known as an emission spectrum.

Light is a form of electromagnetic wave which carries a lot of information about the nature of its emitter or reflector. As astronomical objects lie at least lightyears away from us they can not be analysed in a laboratory setup and also may be too fainter to be seen and study. For this, astronomers used a technique called spectroscopy (astronomical spectroscopy) where they record and look into the light that the objects emit or reflect.

For instance, consider our moon or any planet that is not in the visible region of Earth or simply fainter to be imaged through a telescope (fainter image may mislead the astronomers). Then the light collected by different means like space and ground-based space grazing instrument (telescopes) from that particular planet will be splitted into its constituent wavelengths (a spectrum), in much the same way as a prism splits light into a rainbow of colors. And depending on the properties the spectrum shows, astronomers predict its chemical composition, physical condition, its temperature, and also the evolutionary stage of the object.

The idea of the spectrum of light was first introduced by Isaac Newton in 1672. He experimentally described (in his book Opticks) a phenomenon where he permitted sunlight to pass through a small hole and then through a prism and inturn that light turns to give seven different colors of light. That experiment notably demonstrated that the sunlight which looks pure white to us is actually a mixture of all the colors of the rainbow.

The spectroscope is a device that can split a non-chromatic beam of light into its constituent wavelengths and can record the intensities of the radiation according to the wavelengths. If the observation is made with the naked eye with an eye-piece, then the instrument is called a spectroscope and if it records a photograph of the focus then it is called the spectrograph. The technique of splitting the light into its constituents spectrum is the spectroscopy. Moreover, spectroscopy is also the study of absorption and emission of light and other radiation by matter and the interactions between particles such as electrons, protons, and ions, as well as their interaction with other particles as a function of their collision energy.

Here, spectrum arises when the energy levels of electrons in atoms and molecules are quantised, and the absorption and emission of electromagnetic radiation only occur at specific wavelengths. Consequently, spectra are not smooth but punctuated by ‘lines’ of absorption or emission.

Use of Spectroscopy in the Field of Science and Astronomy

Spectroscopic analysis is not only important in the field of astronomy and astrophysics but is also a crucial technique in development of the most fundamental theories in physics, including quantum mechanics, the special and general theories of relativity, high-energy collisions, the study of strong and weak nuclear forces, and quantum electrodynamics.

For instance, the radio-frequency spectroscopy of nuclei in a magnetic field has been employed in a medical technique called magnetic resonance imaging (MRI) which is used to visualize and realize the internal soft tissue of the body give us an unprecedented resolution image. Optical, radio, and X-ray spectroscopy are used to determine the constituents of distant stars, intergalactic molecules, the primordial abundance of the elements before the formation of the first stars, and even to identify the chemical composition of matter and to determine its physical structure.

Let me add one important and real use of spectroscopy. A technique called the molecular spectroscopy is being used (in fact already built a prototype) to measure the lycopene content of tomatoes in a non-destructive manner. This device is expected to be useful for quality control and logistics management.

The spectroscopic technique is extremely sensitive too where this technique is sensitive to a change of single atom and so even can works perfectly for different isotopes of the same atom. This method can also be used for tracing the amount of pollutants or contaminations.

How does Spectroscopy Work?

Older version of spectroscopy works depending on the prism (to disperse the light) and photographic plates while latest style works using the diffraction gratings to disperse the light, which is then projected onto CCDs (Charge Coupled Devices), however, there are several other spectrograph methods and their choice depends on the range of wavelengths we have to encounter. Other factors that determine the choice of a spectrograph includes its power to resolve the two close lines in the spectrum, the nature of the dispersing material and its dispersive power, the variation of the dispersion with wavelengths of the incident radiation, the brightness, and the speed of the recording spectra of faint celestial sources, and also the absorption and scattering in the instrument.

First, light from the objects travels to a collimating mirror from a telescope through a small opening in the spectrograph. Collimating mirrors are lines up all entering rays of light parallel to one another before they reach a finely scored plate of glass known as a diffraction grating. Now the glass grating lets the light pass through or simply bounce off where lights constitute many wavelengths and there also occurs the change in speed and direction according to their spectral color (wavelengths). This means that the grating bends off the red light in a different way from orange light, which bends a little differently from yellow light and so on, ultimately spreading many wavelengths into a rainbow spectrum.

Rotating the diffraction grating controls which wavelengths of light reach another mirror, which in turn focuses these wavelengths onto a photodetector, such as a charge-coupled device. The detector converts photons into electrical signals that a computer interprets to measure the strength of different wavelengths.