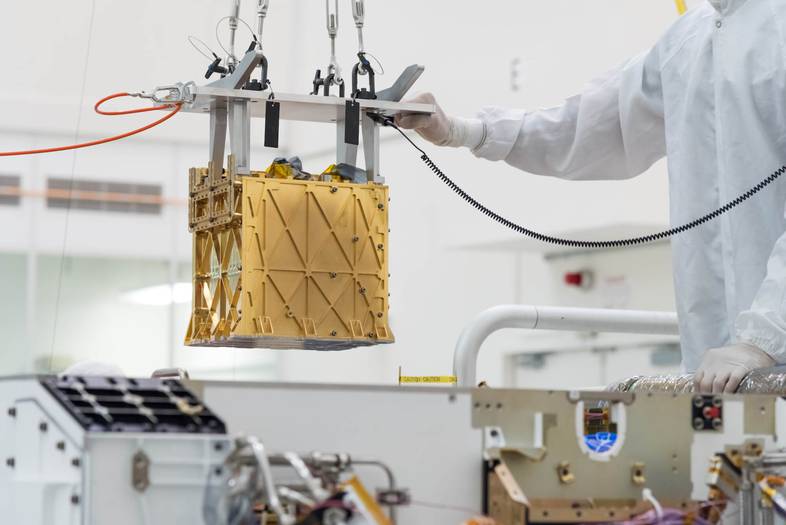 Technicians in the cleanroom at NASA's Jet Propulsion Laboratory, in Pasadena, California carefully lowering the Mars Oxygen In-Situ Resource Utilization Experiment (MOXIE) instrument. MOXIE will "breathe in" the CO2-rich atmosphere and "breathe out" a small amount of oxygen. Image © NASA/JPL-Caltech.

NASA's Perseverance rover carries a device to convert Martian air into oxygen that, if produced on a larger scale, could be used not just for breathing, but also for fuel.

Topics on Mars (Red Planet) have been a hot topic since the centuries as this may contain evidence of extraterrestrial and possibly a biological life as of Earth. Travelling to the far Red Planet is merely an easy task and requires advanced engineered tools and equipment.

On July 30, 2020, NASA launched a Mars rover, named Perseverance, from the Cape Canaveral Air Force Station, Florida. The rover is designed to land on Mars on Feb. 18, 2022. Explore Jezero Crater of Mars rover is designed to capture some returnable rock samples that could carry signs of ancient microbial life.

A mission like Perseverance will help us in future to plan and get astronauts to the Red Planet. But one of the hardest things about sending astronauts to Mars is getting them back home as relaunching a rocket off the surface requires an industrial quantity of oxygen. For instance, a crew of four would need about 55,000 pounds (25 metric tons) of oxygen to produce thrust from 15,000 pounds (7 metric tons) of rocket fuel and this is not viable to carry such a large amount of fuel from the Earth. So, we need some alternative technique that can use something of the Mars atmosphere and use it as a propellant or fuel.

To convert this thoughtful idea a reality, NASA’s Mars 2020 mission, NASA's Perseverance rover is loaded with a highly engineered device, called Mars Oxygen In-Situ Resource Utilization Experiment, in short MOXIE, that can convert Martian air, primarily carbon dioxide, into usable oxygen. MOXIE can produce oxygen from carbon dioxide at a rate up to 10 grams per hour, at least 0.022 pounds per hour.

MOXIE makes oxygen like a tree does. It inhales carbon dioxide and exhales oxygen and the homemade liquid oxygen on Mars could supply more than ¾ of the propellant humans need for exploration on the Red Planet.

Asad Aboobaker, a MOXIE systems engineer at NASA's Jet Propulsion Laboratory in Southern California said, "MOXIE is designed to make about 6 to 10 grams of oxygen per hour - just about enough for a small dog to breathe. A full-scale system geared to make (propellant for the flight home) would need to scale up oxygen production by about 200 times what MOXIE will create."

Mars atmosphere contains only 1% as thick as Earth's atmosphere and is 95% carbon dioxide.

For the conversion of carbon dioxide into oxygen, MOXIE first pulls in the carbon dioxide with a pump and uses an electrochemical process to separate two oxygen atoms from each molecule of carbon dioxide (CO2). The electrochemical reaction is powered by a lot of heat - about 1,470 degrees Fahrenheit. To tolerate such extreme heat, MOXIE is featured with a variety of heat-tolerant materials like a special 3D-printed nickel alloy parts that help distribute the heat within the instrument, and superlight insulation called aerogel minimizes the power needed to keep it at operating temperatures. The outside of MOXIE is coated in a thin layer of gold, for its excellent reflector of infrared heat and keeps those blistering temperatures from radiating into other parts of Perseverance.

As the gases flow through the system, they are analyzed to determine how much oxygen has been produced, how pure it is, and how efficiently the system is working.

The working elements of SOXE are stacked Scandia-Stabilized Zirconia (ScSZ) electrolyte-supported cells with thin screen printed electrodes that are coated with a catalytic cathode on one side and an anode on the other. These are separated by expansion matched interconnects that direct the source, exhaust, and product gases to and from their respective manifolds.

When CO2 flows over the catalyzed cathode surface under an applied electrical potential, a reaction occurs and it is electrolyzed. The CO is exhausted and the oxygen ion electrochemically driven through the SOXE to an anode where it is oxidized. The O atoms combine to produce the gaseous O2, which is then released from the anode cavity at a proportional rate. The reaction chemistry uniquely determines both the minimum electrical current and the minimum CO2 flow required to produce O2 at a given rate.

Though the generated oxygen can be used by astronauts for breathing, Michael Hecht of the Massachusetts Institute of Technology, the instrument's principal investigator explained that breathing is just a side benefit of MOXIE's true goal because the rocket propellant is the heaviest consumable resource that astronauts will need, so being able to produce oxygen at their destination would make the first crewed trip to Mars easier, safer, and cheaper.

The team expects to run MOXIE about 10 times over the course of one Mars year (two Earth years), allowing them to watch how well it works in varying seasons. The results will inform the design of future oxygen generators.