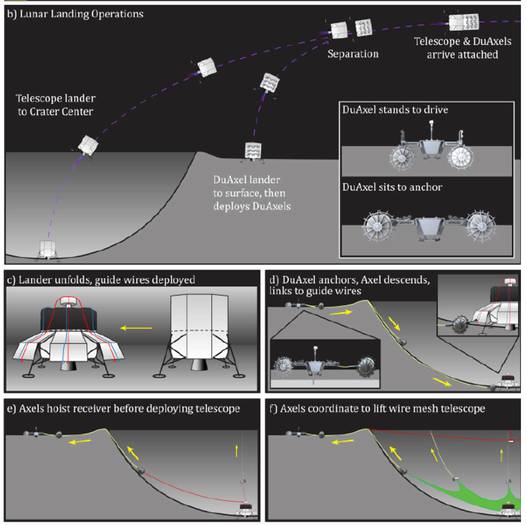 Observing the extensive universe has always been a challenging task. For instance, Earth's ionosphere that ranges from about 60 km to 1,000 km altitude blocks wavelengths greater than 10m. Also, Earth’s dense atmosphere of gas and dust also hinder the observation from the ground-based telescopes no matter how powerful the telescope be and they produce the smoky images.

Related: We Maybe Wrong About Life on Mars

To push these limitations, astronomer tried to observe the universe from above the Earth’s disturbing atmosphere and so they settle the telescope like the Hubble Space Telescope, however, not enough. Hubble Space Telescope is put to revolve at an altitude of about 547 kilometres and provide us with an undisturbed view of the vast universe.

To overcome the impediments and to get the limpid view of the universe, NASA revealed a wild project- Lunar Crater Radio Telescope (LCRT), that turns a Moon’s crater into a radio telescope. This project plans to fit a 1-kilometre radio telescope inside a crater on the far side of the Moon.

So, developing such a telescope will help astronomers in many ways including;

After the success of this project, it would be the largest filled-aperture radio telescope in the Solar System.

Scientists at NASA are deploying a wire-mesh around the 1km diameter of the crater with the help of wall-climbing robots- DuAxel, in a 3 to 5km-diameter lunar crater on the far-side, with suitable depth-to-diameter ratio, to form a spherical cap reflector.

This project is still at the very early stage of planning, and it's not clear yet exactly which crater would be used for the job, but it's an intriguing concept that we'll be keeping an eye on in the years ahead, they are confident that LCRT could enable tremendous scientific discoveries in the field of cosmology by observing the early universe in the 10 to 50m wavelength band (i.e., 6–30MHz frequency band), which has not been explored by humans till-date.