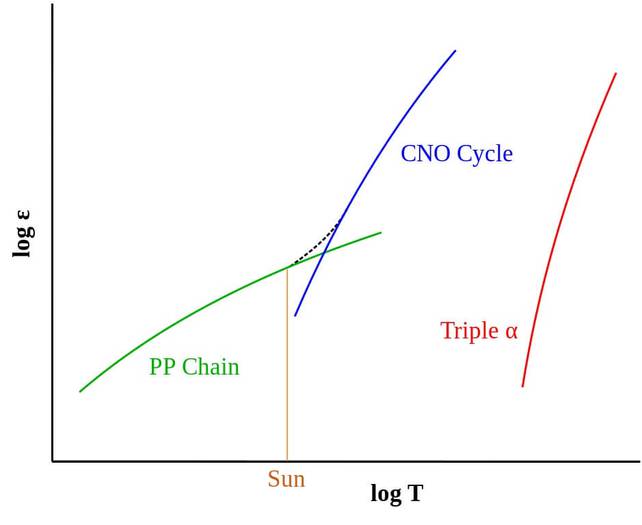 Energy in the core of our sun is not only produced by the pp chain but also by the CNO cycle, indicating a second type of fusion in its core.

Stars are powered by the fusion reaction, a reaction where hydrogen fuses into helium and subsequently into heavier elements. In its theoretical model, it is predicted that heavier elements up to iron and gold are formed in stars, depending on the stellar mass. Theoretically, fusion reaction in stars proceeds via two processes; the proton-proton (pp) chain and the carbon–nitrogen-oxygen (CNO) cycle, depending on how massive is its core mass.

99% of the solar energy is produced by the pp chain reaction. During the process of fusion, neutrinos are emitted and a complete spectroscopic study of neutrinos from the pp chain will lead us to comprehend the mechanism of solar energy production. In 2018, a team of researcher has studied the direct neutrinos from the pp chain and measured the neutrino–electron elastic-scattering rates for neutrinos produced by four reactions of the chain, however, earlier studies have not reported experimental evidence of the CNO cycle.

But a team of researchers, using highly radiopure, large-volume, liquid-scintillator detector of Borexino, reported the direct observation of neutrinos produced in the CNO cycle in the Sun.

Borexino is a solar neutrino experiment, located underground at the Laboratori Nazionali del Gran Sasso in Italy, in which the cosmic muon flux is suppressed by a factor of around 106.

In the CNO cycle, the fusion of hydrogen is catalysed by carbon, nitrogen, and oxygen, and so its rate-as well as the flux of emitted CNO neutrinos-depends directly on the abundance of these elements in the solar core. In the fusion process, in addition to the production of energetic gamma rays, neutrinos are also produced. While those highly energetic gamma rays heat the Sun’s interior over the long period, neutrinos zip out of the Sun at nearly the speed of light.

It was unusual when first in 1960s scientist detected the solar neutrinos and only about one third to one half of the predicted number of neutrinos actually showed up in detectors. This neutrino discrepancy is known as the solar neutrino problem, and it took nearly four decades to solve it.

For stars that are similar to the Sun but are heavier than about 1.3 solar masses4 (M⌾), the energy production rate is dominated by the CNO cycle, whereas the pp chain prevails in lighter, cooler stars. The CNO cycle is thought to be the primary mechanism for the stellar conversion of hydrogen into helium in the Universe and is estimated to account for 1% of energy production in the Sun; however, the uncertainty is large because the metallicity of the Sun is poorly known.

This work provides experimental evidence of the primary mechanism for the stellar conversion of hydrogen into helium in the Universe.

Theoretically, the dominant form of fusion in the Sun should be the fusion of protons that produces helium from hydrogen (pp chain) but astronomer identified CNO cycle also exists. Here the reported study quantifies the relative contribution of CNO fusion in the Sun to be of the order of 1 per cent; however, in massive stars, this is the dominant process of energy production. Hence, this study strongly paves the way towards a direct measurement of solar metallicity using CNO neutrinos.

Detecting solar neutrinos is not an easy task; one of the biggest challenges with detecting CNO neutrinos is that their signal tends to be buried within terrestrial neutrino noise.

Borexino is a solar neutrino experiment where its active core of the detector consists of approximately 280 tons of liquid scintillator contained in a spherical nylon vessel with a radius of 4.25 m. Solar neutrinos are detected by Borexino via their elastic scattering off electrons and particles that interact in the scintillator emit light, which is then detected by 2,212 photomultiplier tubes.

The total number of detected photons and their arrival times are used to reconstruct the electron recoil energy and the interaction point in the detector, respectively.

While the pp-chain dominates fusion in the Sun, this detection indicates that our star is large enough that the CNO cycle should occur at a low level. CNO reaction uses hydrogen in a cycle of reactions with carbon, nitrogen, and oxygen to produce helium and this reaction what primarily responsible for these three elements being most abundant in the universe (other than hydrogen and helium).

Research work was published in the journal nature on 25 November 2020.